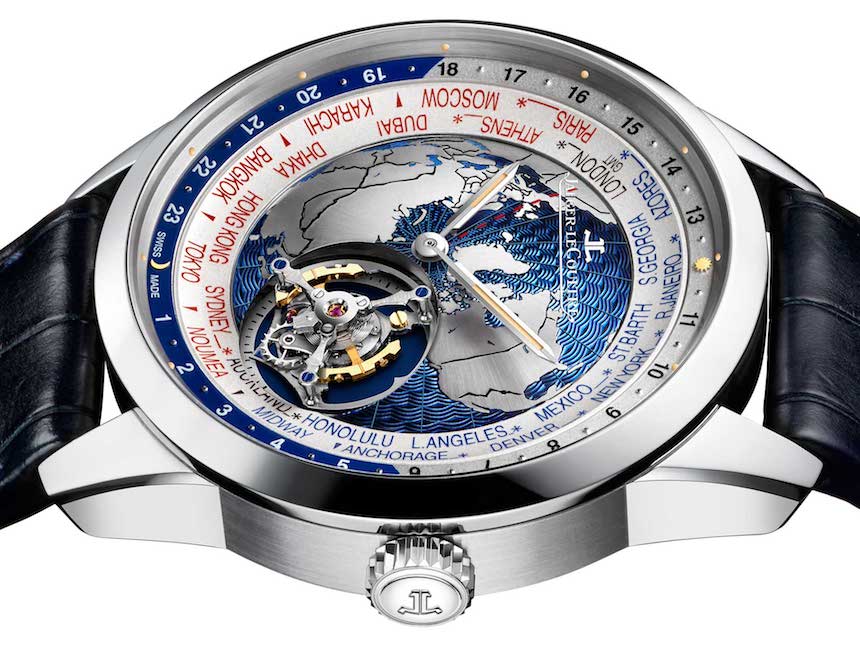 “When in doubt, add tourbillon.” This might have been the mantra for many high-end watch brands since the dawn of the new millennium, and while the tourbillon trend is tired, it is far from being dead… a point proven by the latest pre-SIHH release coming in the shape of the new Jaeger-LeCoultre Geophysic Tourbillon Universal Time. An original 1958 Geophysic (left) and the first piece marking the collection’s 2014 renaissance.

It was back in 2014 that we went hands-on with the first pieces from the re-launched Geophysic collection, a line of watches based on one of the numerous “sleeping beauties” (i.e., one of many discontinued vintage watch collections) of Jaeger-LeCoultre. Originally produced for a short time in 1958 and revived in 2014, the Geophysic has received a lot of love from the brand as we saw this vintage-inspired, classical-looking, elegant collection expand. The latest addition to it is called the Jaeger-LeCoultre Geophysic Tourbillon Universal Time and it is based on the Geophysic Universal Time that you can read more about in our hands-on here.

This new Geophysic world timer is the first world time watch with a flying tourbillon (who knew there still were permutations of complications not yet exhausted by Swiss brands already?) and the third ever from Jaeger-LeCoultre to feature the manufacture’s Gyrolab balance-equipped tourbillon. Just like the Geophysics from the last few years, this piece also has some cool details hidden underneath its heavy platinum dress.

It’s a tough choice whether to start with the technical or the aesthetic details, but when we let our hearts decide… it’ll have to be the Gyrolab balance. I mean it has “gyro” and “lab” in its name, and that’s as nerdy as any major Swiss brand could possibly get!

The Gyrolab balance was developed for and debuted in the Jaeger-LeCoultre Master Compressor Extreme LAB from 2007 (it is here where we’ll note that many of us in team aBlogtoWatch would love to see more pieces from this bold and high-tech range of Jaeger-Lecoultre watches). This meant a strong start, but we were soon let down by the apparent omission of this JLC-logo-inspired new balance from pretty much all JLC watches made thereafter – mind you, though, the mind-alteringly awesome Reverso Gyrotourbillon (hands-on here) of 2016 also had it. So, the Gyrolab disappeared as quickly as it came and remained tucked away safely in the manufacture all the way until 2015, when the production-made Geophysic True Second and Universal Time finally received this “new” feature. You will not be surprised, then, to learn that the Jaeger-LeCoultre Geophysic Tourbillon Universal Time also comes equipped not with a traditional balance wheel, but with a Gyrolab one. Designed to reduce air friction by cutting back considerably on the piece’s surface area, this iridium-platinum alloy double fork is now very prominently displayed on the dial-side of the watch. Encapsulated by a lightweight, three-spoke tourbillon bridge on top, the whole tourbillon assembly remains completely exposed from the top thanks to the “flying tourbillon” configuration, where the whole thing is supported only from below. A nice and always appreciated design element is the seconds track that helps one use the cage and its one-minute cycle as a seconds hand of sorts.

Because the tourbillon was positioned at the 4:30 spot on the dial, and especially because it’s so massive and requires so much space, Jaeger-LeCoultre did have to fiddle with the world time display quite a bit to make room for it and not compromise functionality. When comparing this to the “original” Jaeger-LeCoultre Geophysic Universal Time (the non-tourbillon version), what happened was that the discs carrying the city names and the 24-hour day-night chart got swapped. The city names are now closer to the center of the dial while the rotating 24-hour disc has been moved to the periphery. Notably, JLC had to machine a bit away from the top of the letters in Auckland – sorry, Aucklanders – and if you really want to sound like a true watch snob, you’ll mention that cutting into text is still sort of a no-no in high-end watch design. Still, there’s plenty of eye-candy to distract you with its primary source being the world map that resides in the center section of the dial. It is not easy to tell from official images, but what’s new for the Jaeger-LeCoultre Geophysic Tourbillon Universal Time over the previous versions is that the globe is now actually three-dimensional meaning that it has a convex, rounded shape rather than being a flat plane. A more subtle – and also definitely excruciating-to-achieve detail is how the open waters of the map are now covered by self-explanatory, wave-like guilloche decorations. A nice feature, though we wish somehow we could see attention to detail of this caliber in watches a tad more attainable. “The world’s first world timer watch with a flying tourbillon, by Jaeger-LeCoultre” – we’ll gladly take it as a great kick-off to 2017 and are looking forward to bringing you hands-on images and coverage of this and all other JLC novelties from SIHH in less than two weeks from now! Price for the Jaeger-LeCoultre Geophysic Tourbillon Universal Time, as is usual when it comes to pre-event releases, is a highly classified Swiss State Secret until the event commences… what we do know for sure is that it’ll be exclusively available in a 43.5mm-wide platinum case and limited to 100 pieces in total. jaeger-lecoultre.com