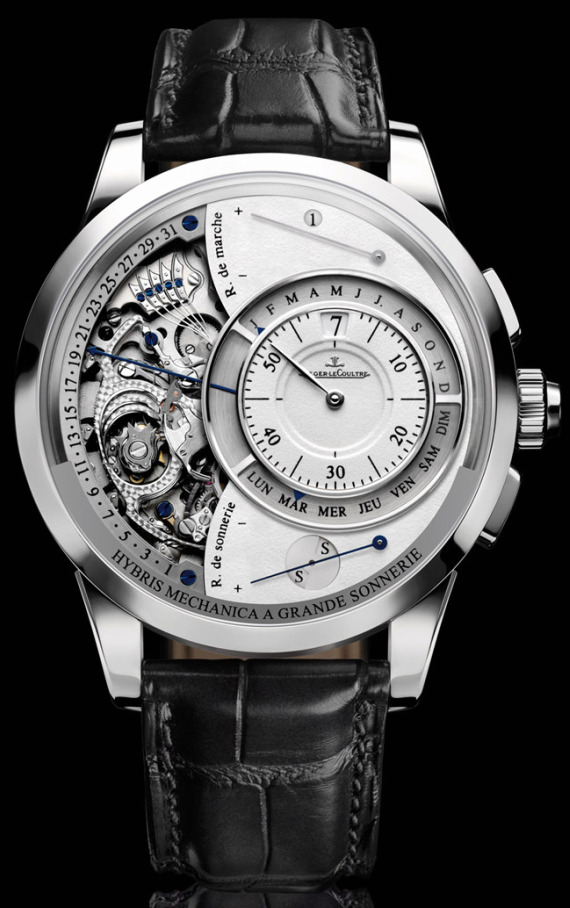 Jaeger-LeCoultre Hybris Mechanica Grande Sonnerie, Thoughts On The Most Complicated Watch In The World After writing a few articles about this watch I wanted to step back and think about it a bit. To be “the world’s most complicated watch,” even for a short period of time is quite a feat. This is measured in terms of “complications” which tend to have generally accepted definitions and can be enumerated to watch industry professionals and enthusiasts. The Jaeger-LeCoultre Hybris Mechanica Grande Sonnerie has 26 complications. If you could count its functions, the number does not reach 26 of course. In fact, let’s count the number of functions that it has in a nutshell. It shows the time (hour, minute, and seconds) – three functions. It has a perpetual calendar function that shows the day, date, month, and leap year – another four functions. The watch has a complex sonnerie (chiming) mechanism that has a three different chimes plus a minute repeater – another four functions. Then you have two power reserve indicators – two more functions.  If you count those up, you get 16 complications. So what about the other 10?  Well, they are there, but you have to understand how the watch industry counts “complications.” For instance, the hour indicator for the time is a jumping hour indicator. So I think that is two complications in one. Then you have the tourbillon balance wheel and escapement (visible through the rear of the watch) that is another complication. And so the list goes on. Jaeger-LeCoultre hasn’t exactly released the definitive list. What I like is how even though the watch ups the ante by just one complication over the last “most complicated watch,” it doesn’t just do the same things, plus just one more. It has its own character and style, and focuses on its own types of complications. Perhaps you will not agree that all the complications should be counted as such, but the end result is still a damn complex watch. Further, I give Jaeger-LeCoultre kudos for not taking a “shove everything into this watch” approach. There is a ton of other complications that could have been added (such a chronograph, equations or time, moonphase, more calendar functions, etc…) – but rather Jaeger-LeCoultre designers planned the watch out well focusing only on basic perpetual calendar functions (displayed in an attractive manner) and the complex chiming functions. In fact the sonnerie functionality of the watch is likely to be the most complex part of the watch, by far. The Hybris Mechanica Grande Sonnerie is supposed to be the only sonnerie watch in the world to accomplish certain chiming tasks such and playing the entire Westminster chimes melody. This is apparently some holy grail of sonnerie watches, and the Hybris Mechanica Grande Sonnerie watch has done it. Another world’s first for Jaeger-LeCoultre. In addition to this melody as a chime, the watch features two others, as well as a silent mode. What does this mean? You know those Casio watches that beep at certain intervals? This watch does that same thing, but instead of a beep, you get a little song that is based on tiny hammers and gongs and a ridiculously complex ballet of gears and “magic” (seems like it!).

I’ve said this before, but I am really amazed at how the entire Jaeger-LeCoultre Calibre 182 tourbillon movement fits in to the 45mm wide by 15mm tall case. I mean the movement has over 1300 parts! Each hand decorated and finished. This watch must take forever to manufacture and test. The case is in 18k white gold, which I don’t totally understand. I mean at this price why not just go platinum? I mean it looks really similar to white gold. Hell, there is even platinum in white gold. I really don’t know why, but there are two possible explanations in my mind. First, it might have just weighed too much in platinum. Second, the platinum case might have negatively affected the sonnerie functions of the watch. The heavy dense platinum might have worked to dull the sounds of the chimes too much. It is a guess, but it seems plausible. Like previous “most complicated watches” the Hybris Mechanica Grande Sonnerie is very conservatively designed but still have some modern elements to it. The case of the watch is probably the most conservative element of the watch. It is attractive, but nothing special. The dial however has a nice cohesive look and is “unoffensive.” I do like that Jaeger-LeCoultre took the bold step to have the dial partially skeletonized. Not that this is such a unique move as this has been a trend over the last few years for highly complex and exclusive watches, but Jaeger-LeCoultre chose to remove lots of real estate on the dial for more possible complications. ‘Cause, let’s be honest, how long is it before someone comes up with a 27 complication watch? I would have loved Jaeger-LeCoultre watch to just blow everyone away by having a 30 + complication watch. Ah, but they would never do that. Not in a second. Learning from computer hardware companies perhaps (slow jumps in processor speed as an example), they are much better off doing a 26 complication watch, then a 27 complication watch, then 28, and you can see how they will swoon collectors each time. Hey, they are a business too right? They can also say “Jaeger LeCoultre has released [X amount] of the most complex watches in the world – sequentially.” Maybe they have that up their sleeve? Or getting to 26 complications was just that big of a pain. At $2,500,000 the Jaeger-LeCoultre Hyrbis Mechanica Grande Sonnerie is a “good deal” as it comes with two other watches. I don’t know that anyone really wants the other watches that much. We have the original Gyrotourbillon watch, not even the Gyrotourbillon 2, and the Reverso Complication a Triptyque, which is pretty cool, but you have to do a lot of case switching around to see all the complications. Then there is that safe that the watches come in. I’d like to see how this thing is delivered. “Sir, where would you like your 450 pound safe placed?” Actually I don’t know quite how big the safe is, but I hear it is larger than something that just fits three watches. For $2.5 million Jaeger-LeCoultre’s president needs to hand deliver it on his back via red carpet with armed guards with M-16 automatic machine guns. Now that is presentation! $2.5 million may seem like a lot (which it is), but Jaeger-LeCoultre will likely find 30 people on the planet interested in the watch set. It is a relatively sound investment, not that if you have this type of money and are willing to spend it on a watch you need to worry about this type of investment. Still it is nice to know you aren’t losing too much money on the purchase. Instead is the price of saying that you have the most complex watch in the world  (for at least a few years). Plus the watch is still pretty nice. I worry about the fragility of it, as it is so complex and delicate. So once in a while you can take it out of the case and play with it. I would love to see Jaeger-LeCoultre follow the path of BNB Concept’s Confrerie Horlogere, who five a lifetime warranty on their watches. I mean once you get to that price it would be nice to offer free lifetime service on the watch. I mean you are talking about a likely repeat customer right? So there you have it. In the next several months Jaeger-LeCoultre will release the Hybris Mechanica Grande Sonnerie watch and we can take another look at it then.