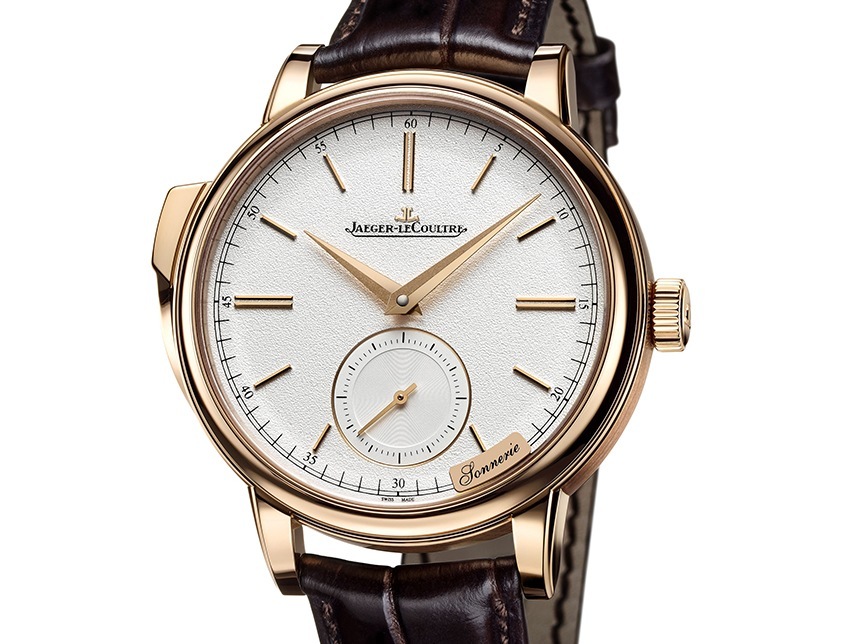 2015 sees the release of the Jaeger-LeCoultre Master Grande Tradition Minute Repeater watch. Jaeger-LeCoultre is one of the most revered names in watchmaking and is fondly referred to as “La Grande Maison,” which can be loosely translated as The Great Manufacture. In its rich 182-year history, the company has created over a thousand calibers, registered 400 or so patents and has numerous inventions credited to its name. And for the most part of the past century, it even provided movement blanks to Patek Philippe, Audemars Piguet, and Vacheron Constantin. The caliber 920 is a great example of this and is still used even today by Audemars Piguet in Reference 15202 Extra-thin Royal Oak, also known as the “Jumbo.” However, while the dial may look simple, its construction is anything but. Look closely, and you will see that the dial is also finely grained, while the hour markers are in fact rendered using polished pink gold. The dauphine hands have also been hand-finished, and are endowed with both polished and sandblasted finishings.

Underneath the dial beats Jaeger-LeCoultre’s caliber 942, which is assembled and decorated entirely by hand. The movement is made up of 437 parts, including 58 jewels, and a new 22k gold rotor bearing the logo of Jaeger-LeCoultre with polished and grain finishes. Caliber 942 also beats at 28,800 vph and has a power reserve of a very decent 40 hours. The caliber 942 also features Jaeger-LeCoultre’s special crystal gong, which is machined to from a single piece from a top secret alloy. The gongs are then welded directly to the sapphire crystal, so that when the hammers strike, it creates a loudspeaker effect, allowing the minute repeater mechanism to be easily heard. Jaeger-LeCoultre has also eschewed the traditional slide mechanism for activating the minute repeater function and opted for a more elegant push button system. This allows the watch’s case to be compact, and for the Jaeger-LeCoultre Master Grande Tradition Minute Repeater, the push button has been positioned at a diagonal to the crystal gong, thus ensuring some measure of symmetry in its looks. The watch also features a safety mechanism which protects the watch against unintentional activation of the striking function.

The new Jaeger-LeCoultre Master Grande Tradition Minute Repeater also comes with an alligator strap and with a matching pin buckle. It is priced at $169,000. jaeger-lecoultre.com