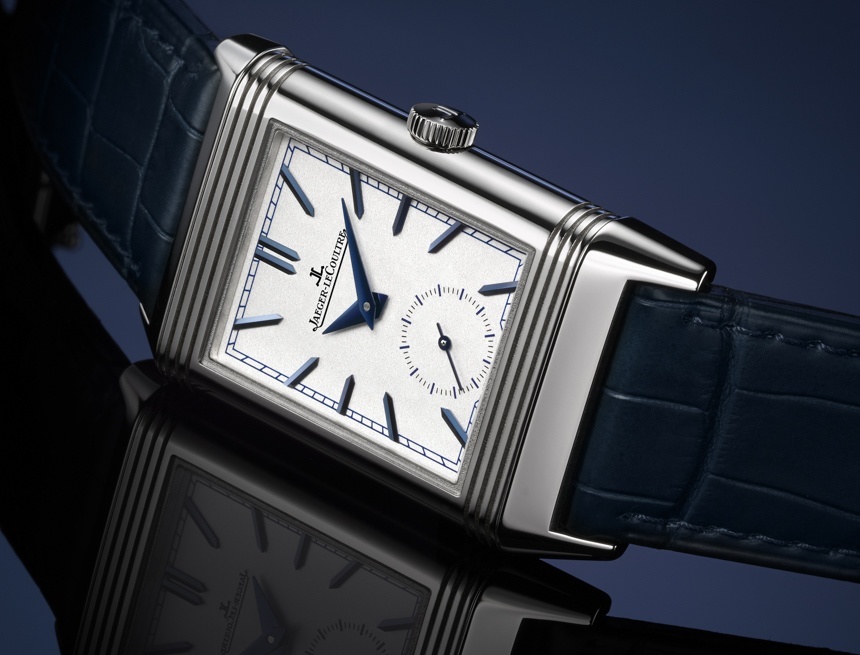 Held in Geneva between the 18th and 22nd of January, 2016, major luxury watch industry exhibition SIHH 2016 is just around the corner, and we have hence been seeing some rather cool pre-SIHH releases already. The latest to tease us with some (more or less) new-for-2016 pieces is Jaeger-LeCoultre, this time around, specifically with their iconic Reverso collection’s latest additions to officially debut at SIHH 2016. “Iconic” – a term so overused in the world of horology, it’s on par with “luxury,” “refined,” and “ambassador” at this point… and yet, if there is one timepiece that remains true to the original, powerful meaning of this word, then that has got to be the Jaeger-LeCoultre Reverso. Originally designed in 1931, Jaeger-LeCoultre dreamt up its swiveling case to create a watch that polo players could wear while playing, without having to fear that the crystals on the front of their watches would be crushed by a less fortunate strike from a fellow player in a heated match. While that arguably seems pretty niche, it opened up a universe of possibilities, one that fails to get old or boring even today, some 85 years after its conception. It should come as no surprise, then, that the minds of designers and engineers at Jaeger-LeCoultre have been working tirelessly on creating yet more iterations of one of the few everlasting “design home-runs” among watches. In 2016, the Jaeger-LeCoultre Reverso turns 85, a respectable age, and, you guessed it, a golden opportunity to release some tribute pieces to the original. The Jaeger-LeCoultre Reverso Tribute Duo sports a sharp-looking white-blue front, looking pretty similar to the Grande Reverso Ultra Thin 1948 that we went hands-on with here. The front dial features large baton indices and dauphine hands – a high-contrast, yet also very elegant combination. The case, only available in steel for the Jaeger-LeCoultre Reverso Tribute Duo, comes in at 25.5 millimeters wide, 9.15 mm thick, and some 42.8 millimeters tall, with the case back – as the “Duo” part of the name implies – featuring a second dial. Thanks to the 854A/2 hand-wound caliber, this dial can be set independently from the front to indicate time in a second timezone. In blue with a guilloche pattern surrounding the two rounded dials, there was space for an AM/PM indicator at the six o’clock position to make tracking the time in that other part of the world a bit easier. Pricing information for pre-SIHH releases is usually not made available prior to the show, however, based on other comparable pieces, price for the Jaeger-LeCoultre Reverso Tribute Duo should be somewhere around $9,500. The front does away with the small running seconds of the Jaeger-LeCoultre Reverso Duo and replaces it with a date and phase of the moon indication – leaving the Jaeger-LeCoultre Reverso Tribute Calendar’s dial looking more complex at first, and less “animated” at the same time – a point worth considering for those who enjoy seeing the sweeping motion of the seconds hand of a mechanical movement. The Jaeger-LeCoultre Reverso Classic Large Duo is everything it says on the cover: with a classic Arabic numeral dial in silver, blue dauphine hands and a small AM/PM indicator at six, it is a modern classic when it comes to Reverso designs. Set in a 28.3 by 47 millimeter steel or pink gold case, it features the 969 caliber that is also a bit more, well, modern; with automatic winding and 4 Hertz operating frequency – albeit, a mere 38 hours of power reserve. “Duo” it is, and hence, on the reverse side we find a home time indicator – note how this basically is an inverse of the previous two pieces where the case back side showed the secondary time zone. In black, with white hour markers, dauphine hands, and plenty of hobnail or “Clous de Paris” guilloche pattern, this side appears to be a more art deco-inspired alternative to the front’s sober black-on-silver aesthetics. Price for the version in steel will likely be around $11,000, with a considerable premium for the pink gold alternative. Working our way to more simple and hence more affordable versions among the SIHH 2016 Jaeger-LeCoultre Reverso releases, we find the Jaeger-LeCoultre Reverso Classic: with a solid steel case back, this piece will come in three sizes which are quite straightforward: Small, Medium, Large, coming in at 21 by 34, 24.4 by 40, and 27.4 by 45.6 millimeters wide and long, respectively. The small will be equipped with a quartz movement, while the medium and large versions will rock automatic 965 movements. Prices are expected to range between $4,500, $5,500 and $7,500. Last but definitely not least is the Jaeger-LeCoultre Reverso Classic Duetto. Available in Small or Medium, it will either come in stainless steel or 18k pink gold, with 21 mm by 34.2 mm, or 24.4 mm by 40 mm cases. Both versions, regardless of the case material will have a diamond set Recto side of the case with a secondary dial in black. The Small version comes with a hand-wound 844 caliber while the Medium comes with an automatic 968A inside. Both case versions and materials are available on a leather strap, with the pink gold model boasting the option of a solid 18k pink gold bracelet. Prices, depending on the model and case material should range somewhere between $12,000 and $39,000. This was but a quick look at some of the Jaeger-LeCoultre Reverso novelties for SIHH 2016, with some big guns certainly being held back for the grand reveal during the event, to celebrate the 85th anniversary of this iconic collection. As always, team aBlogtoWatch will be there at SIHH 2016 come January, fueled by caffeine (and our love of watches, but of course) and you can track our pre-event and live SIHH 2016 coverage here. jaeger-lecoultre.com