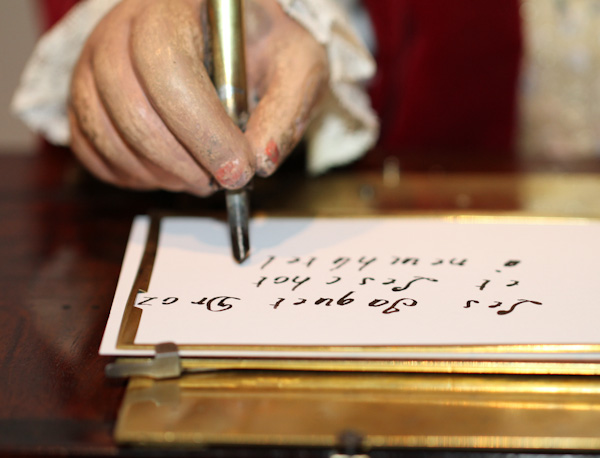 Watch brands like to pump up their history a lot. This is especially true in Europe where with age comes legitimacy. It also helps when your history includes impressive things. A lot of today’s watch brands that bear vintage names don’t always have the most interesting histories. Much of them can be summed up as “man X did in fact make watches or clocks 150 – 200 years ago.” Two of the names that do come with a really impressive history are Breguet and Jaquet Droz (both conveniently owned by the Swatch Group now).

Breguet is well considered to be the “father of modern watch making.” If you study his work and are lucky enough to see some of his surviving creations you’ll see why. Pierre Jaquet Droz on the other hand is remembered not only for producing incredibly impressive technology, but also for his showmanship. He helped create many of the marketing techniques that high-end watch makers still use today to market and sell their products. Looking back at his work and legacy, his products and ideas are still incredibly impressive over 200 years later. In the year 2000 the Swatch Group revived the Jaquet Droz name and re-launched the brand after a considerable absence from the market. They focused the core look and feel of the brand around the look of an obscure pocket watch with two overlapping dials that formed a figure eight. Admittedly elegant, the design of the dials with that of the seconds being larger was both unique and very friendly to the growing Chinese market (who very widely consider the number eight as a symbol of prosperity and good fortune). The focus of the brand would be to assert a beautiful historic look while also recreating some of the aesthetic wonders that marked Jaquet Droz in his time during the latter part of the 18th century.

The most impressive elements from Jaquet Droz’s history are too complicated to have a place in modern wrist watches – for the most part. This fact is actually really interesting because you have a brand with a cool history that is unable to really display much of that history in their modern products. This is less of a problem and more of a challenge for Jaquet Droz, who can benefit greatly by showing people what their forefather was all about. Jaquet Droz was Swiss from around La-Chaux-de-Fonds. Most of his work took place in the late 1700s to the early 1800s. Despite a lot of success, I believe it was actually the French Revolution and activity of Napoleon which removed a lot of clients and income streams for the Jaquet Droz company (that was being run by his family at the time).

Jaquet Droz started as a clock maker but seemed to quickly focus on other items as well. Collectively I don’t know what to call them other than high-luxury novelty gadgets. One such novelty gadget that proved very popular in that era was the singing bird automaton. These small automated bird puppets moved and sang life-like songs thanks to a bellows and whistle system. One popular Jaquet Droz product that incorporated these automaton birds was a birdcage style hall clock. The cage was meant to be hung and on the bottom of it was a clock (facing down). You would tell the time by walking underneath it. Inside the cage might be any number of automata. These might be activated on command, or be set to play on the hour (for example). Jaquet Droz automata didn’t end with birds. A range of animals and humans were created in an endless assortment of incredibly decadent items. Again, these were marketed toward the ultra-wealthy, who wanted each to be more magnificent than the last. In an age of electronics, computers, and robots, these two centuries old mechanical creations don’t at all fail to put a smile on your face when seeing them operate today.

Clever business practices allowed Jaquet Droz to gain access to high families and royalty. I believe his first major audience was with the Spanish court and royal family. So impressed were they with his work that he was able to fund months (if not years) of work with their orders. Jaquet Droz knew that the perception of his skill and ability to impress was key to his success. In order to do this he would create wonderful performance pieces meant to add value to his more standard creations. This is where the androids came in. I would love to know more history about how these androids were created, by whom, and how complicated they were at the time. Jaquet Droz was not the only one making them, but he probably created some of the more impressive machines. The idea was to wheel in a mechanical life-like puppet, impress a rich family, and have them order everything from pocket watches to elaborate table automata from him. This showmanship gained his company international prestige and acclaim. History seems to show that people even paid admission fees to see his automata in action.

The first of the three major android-style automata was the Writer and was created in 1774 I believe. It was then followed by the Draftsman (similar to the Writer but drew pictures), and the Pianist (a female style android that played an organ style piano). The Writer is also the automata that inspired the principle “character” in the Martin Scorsese movie “Hugo.” I heard news that the Hugo team didn’t even know that the Writer was still in existence when making the movie. I got a special chance to not only view the Writer in Switzerland, but also to see how it works. The three automatons all still operate, and are maintained by skilled professionals. They really don’t seem to be as delicate as you might think from such old machines. The Writer is an android style doll that sits at a specially made desk. Aside from being sized for the doll, the desk is rather standard. All the magic is in the Writer itself. A stack of gears placed in the Writer dictate what it is able to write. According to Jaquet Droz, the Writer would be equipped with a custom gear stack for each royal family it visited – being able to deliver a specially tailored message to them.

Watching the Writer operate is incredible. Using a crank, the mainsprings (I believe there is more than one) need to be first wound up. Jaquet Droz wanted these androids to be as life-like as possible. The Writer’s head and even eyes move along with its hands to write out the message. My favorite part is how the Writer pulls up his quill and dips it into ink a few times to complete the message. These life-like operations continued to improve. The Draftsman uses a pencil and actually blows dust from the paper with his mouth while drawing. The Pianist appears to breath while playing the piano.

I was able to view the gear work in action while the Writer was operating. For me, this was as impressive as what the Writer was actually doing. Anyone interested in clock work of any kind will be mesmerized by the mechanism. It begs dozens of questions in regard to how the machine was made and where the talent seemed to come from. Actually, the more time you spend in the watch world, the more you learn how there is little to no new technology or designs (only new materials and manufacturing practices). Even some of the watch industries most sophisticated achievements are 200 or more years old. There is no way that Jaquet Droz could replicate anything like the Writer in wrist watch form. This year they will release an automaton minute repeater watch – but it is a mere novelty compared to the theatrics of a life-like writing or drawing android powered by springs and gears. A few years ago, Jaquet Droz did attempt to recreate the magic of the automata in a machine called the Time Writer. Never released for sale of any type, the Time Writer was completed and it does work. The Time Writer machine had a Jaquet Droz Grande Seconde clock, and when activated would write out the time on a piece of paper. As many people have described it, “it is incredibly useless and incredibly cool.”

What Jaquet Droz can replicate in wrist watch form are some of the artistic techniques and visual styles that marked the brand’s antique works. This includes forms of enamel and hand-painted dials, as well as other beautiful artistic techniques valued by today’s high-end watch buyers. Jaquet Droz’s enduring challenge will be to educate their buyers on the brand’s larger history and hope that a little bit of it transcends into their modern creations.