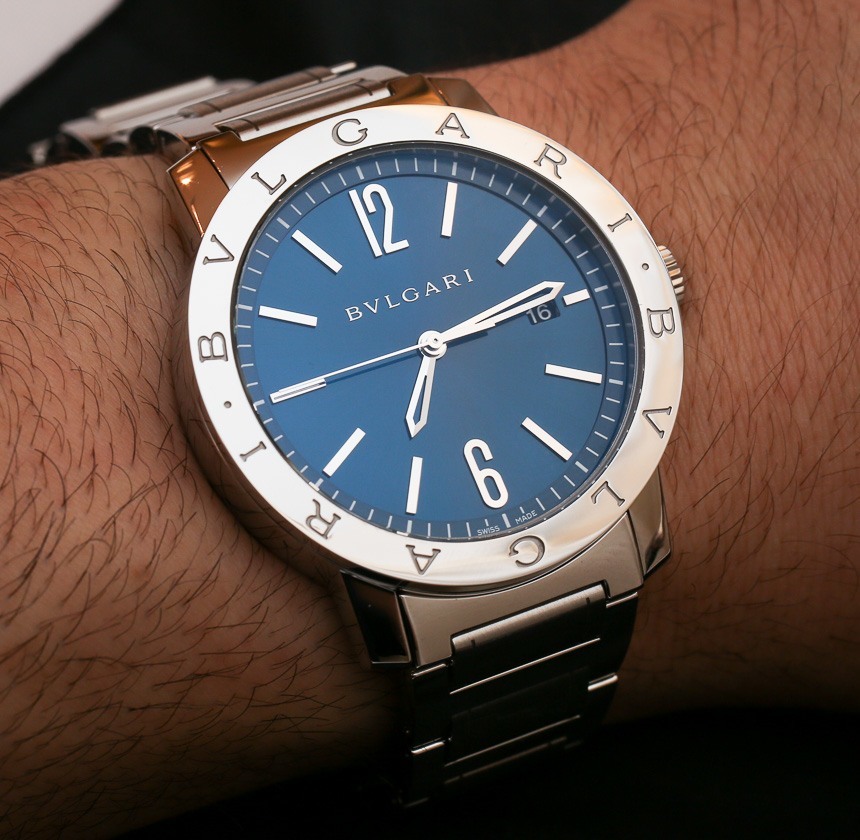 On the occasion of the 40th Anniversary of the BVLGARI-BVLGARI watch, aBlogtoWatch sat down to chat with Bulgari CEO Jean-Christophe Babin to discuss what’s next for the LVMH-owned Italian Jeweler. Opening a successful heritage exhibition at New York’s Fifth Avenue Store, the watch industry veteran spoke about the collection’s history, the brand’s “Italian Genius” inspiration, and even offered some insider insight into what we can expect the next big collection focus for Bulgari watches will be. Jean-Christophe Babin: Well, to begin with, the BVLGARI-BVLGARI collection was actually not our first entry into watches. Bulgari began in the early 20th century with watches when we first crafted jewelry watches. Bulgari has a long tradition of jewelry watches (so ladies’ watches) which went on through the mid-’70s, never manufacturing any watches for men, but really focusing on ladies and the design element, using often very prestigious movements. In those times, there were very few manufacturers doing small mechanical movements, but those we used included movements from Vacheron Constantin and Jaeger-LeCoultre, to name a few. The big change with “BB” (BVLGARI-BVLGARI) or Bulgari Roma, which was the first one, was that we finally added to the jewelry segment the first men’s product stream, “a daily-watch segment.” Bulgari Roma was really the first men’s watch which then gave birth to the ladies’ versions – but what is important for us here is the opening of Bulgari watches to the “daily men’s watch” market. BVLGARI-BVLGARI (aBlogtoWatch hands-on article here) was meant to be a very versatile product where you could dress it up or dress it down. The first BVLGARI ROMA c.1975 created as a gift token for the brand’s top 100 clients

So, actually, the idea of that watch and the way it developed was very funny. The idea was originally to do a holiday gift to all the jewelry customers. You see, you couldn’t gift them jewelry because they were actually purchasing jewelry, so they thought it would be very nice to have limited edition watches for all the loyal jewelry customers, and it was born as the Bulgari Roma. It was in the vision of the old Roman coins where the old Roman emperor used to engrave his name on the edge of the coins. So, for this, we made it a tribute back to the ancient city where we have our heritage as a brand. This was so successful that we felt that it could be more than just a gift, more than just a tribute, but something more commercial. This evolved to the BVLGARI-BVLGARI collection that is one of our most successful collections today. aBlogtoWatch: There are a number of key similarities and differences between the new limited edition Bulgari Roma collection out this year for the anniversary and the BVLGARI-BVLGARI. What is there to be seen in order to appreciate these two separate collections?

Jean-Christophe Babin: People are fascinated by the history of a bold design, and the version this year is exactly that. In the new design of the Bulgari Roma Finissimo Tourbillon, we have maintained the vertical edges of the case that are a traditional element of the original. Also, you still have the engraving, but it’s delivered in a much thinner way, adding an “elegant” dimension that was not the primary word used to characterize the original one. But even if consumers don’t know the history, I think they will still be very attracted to it because it’s a unique piece, and especially if you know what is behind it. It is, first and foremost, though, a very beautiful piece. aBlogtoWatch: Since your coming to the brand, we have seen a lot of exciting things in the watch sector at Bulgari with bringing the manufacturing in-house and especially with integrating some of the best in movements and design productions, all under the Bulgari umbrella. What, in your mind, is the next challenge when it comes to developing the watch division of Bulgari?

Jean-Christophe Babin: I think that for a brand with such a strong design identity, the challenge is to keep our uniqueness in that aspect. And I think we have been successful over the years probably because we came onto the market with our unique designs bringing something very new to the Swiss market and the industry. This is directly related to the fact that we are Roman, and BB and Bulgari Roma are probably the best expressions of that. But if you think of all of our designs, they really all have that unique expression that can only be explained if you know Roma. So, the foremost challenge is to keep this uniqueness, and more than ever, to express in our products what we convey in our advertising campaign regarding our heritage. That is the “Italian Genius” concept and its duality, embodied, of course, by Leonardo Da Vinci. The idea is that he was, on the one hand, uniquely skilled in design, and on the other hand, he was also a very skilled artist who engineered everything. This duality is conveyed in our creativity through our men’s watches, obviously, with amazing watches and movements, but also in ladies’ watches as a jeweler – from the most familiar, such as LVCEA, to the most extraordinary and complicated watches, like Il Giardino Nocturni that are so much more than just a tourbillon. So we really want to express our duality in those fields in basically three blocks – the men’s watches, the ladies watches, and the jeweled watches. The men’s watches in particular, although now with many dimensions, going forward, will be more and more expressed by one major design which is the OCTO design. In the past few years, we have presented OCTOs with very complex movements (such as the Finissimo Tourbillon movement); this year we are adding a new bi-retrograde movement, and then as we move on, we will see more and more complications and grande complications nested within the amazing OCTO design. We believe the OCTO is really an icon in design, and we need to prove this. You cannot just pretend that something is iconic, you have to actually deserve it and work for it. We believe that it has all the roots to become iconic, and for that reason, a lot of new developments in complex watches will be born directly into OCTO cases. The details will, of course, vary and will have to be custom-fit to the movement shape and thickness, but the overall shape is something that is iconic. aBlogtoWatch: Speaking of ultra-thin, Bulgari is currently credited with pioneering a lot of the current achievements in the race for ultra-thin. Where do you see the next step in the development of this movement going? Perhaps smaller or designed for women?

Jean-Christophe Babin: Well, the movement is wider because of the platinum, but I don’t see this as a problem, with the trend of ladies now wearing bigger watches, and I can easily imagine that as a possibility. In fact, I even have some designs in mind for some OCTO-based Finissimo development for ladies watches or even BB-based, which can be very elegant but which, compared to Divina, for example, are wider by definition.

aBlogtoWatch:  Well, we are excited to see what is coming up next for Bulgari, and congratulations on the anniversary!