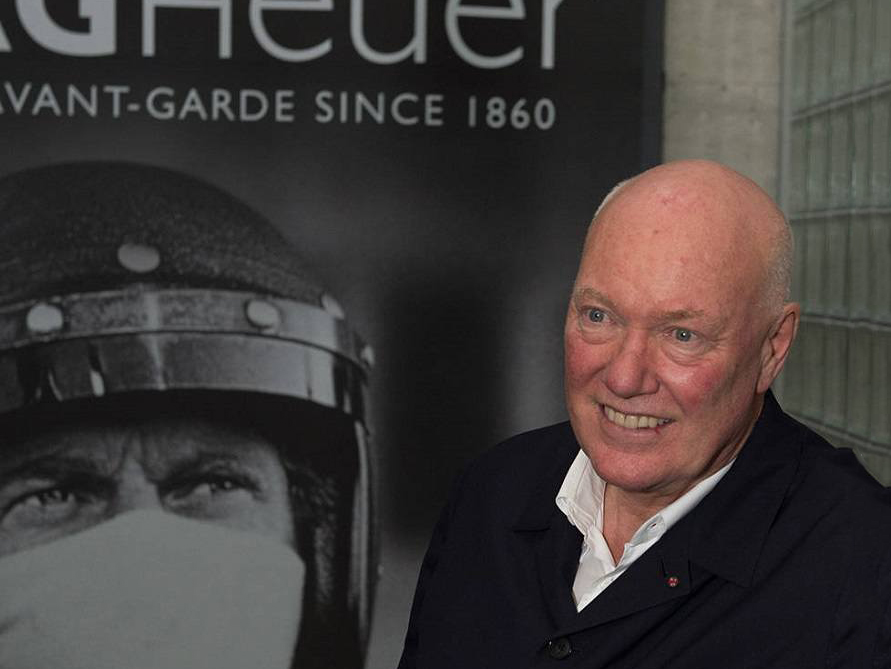 TAG Heuer will unveil their second smartwatch product next month. There has been some speculation about this, and I can now confirm it will happen on March 14, 2017. In anticipation of the upcoming launch of the TAG Heuer Connected Modular, or “2.0” as some are calling it, I spoke with TAG Heuer CEO Jean-Claude Biver about what he has learned about smartwatches in general as well as what to expect for the upcoming watch. The new product is being called the TAG Heuer Connected Modular, and among other things, it will offer a way to combat technology obsolescence. First, some background. In November 2015, TAG Heuer debuted the TAG Heuer Carrera Connected (aBlogtoWatch hands-on here), the brand’s first smartwatch product. At the time, it was probably my favorite smartwatch given its style, comfortable design, always-on screen state, and the fact that it was running a stable operating system with Google Android Wear. As a traditional Swiss watch maker, TAG Heuer was not only under some fire from its colleagues for releasing a product that (to some) seemed to represent a threat to traditional mechanical or at least analog watches, but it was also out of its comfort zone with an electronic product. Now, about a year and a half later, TAG Heuer builds on the lessons it learned from the original TAG Heuer Carrera Connected and will release its sequel, the TAG Heuer Connected Modular smartwatch product prior to the watch tradeshow Baselworld 2017. The Carrera Connected watch was one of – then still new “interim-CEO” – Jean-Claude Biver’s first major product releases at TAG Heuer – and no one really expected a smartwatch from him.

I recall several years ago when Apple released the Apple Watch asking Jean-Claude for his thoughts on it. This was at a time when he publicly claimed to mainstream news outlets that he did not think the Apple Watch represented a design traditional watch-wearers wanted. He also personally admitted that he was interested in such a technology, but would not wear the first generation Apple Watch, probably not the second, but possibly the third. Jean-Claude Biver is a good CEO for a watch brand because he loves watches. But given the novelty of smartwatches, he has little or no personal experience to draw from in helping him to decide what makes a good smartwatch. Traditional watch designers today benefit from the fact that the timepiece industry is well-matured with established lessons in aesthetics, ergonomics, and production techniques.

The same cannot be said for smartwatches that, even as TAG Heuer releases their second smartwatch product, Biver claims is a product category still “in the stone age.” Compared to the hundreds of years of experience the watch industry has in making traditional timepieces, he isn’t incorrect. With that said, even if Mr. Biver is new to a product, he understands the emotions that consumers must have in order to want them. Armed with these tools, he always seems to have a leg up on his colleagues. Despite being primitive in the scheme of watches, sales of the original TAG Heuer Carrera Connected watch exceeded expectations, forcing TAG Heuer to scramble and produce more units. Biver was outspoken in saying (at the time) that he didn’t necessarily have high hopes for the Connected and that he would not be surprised if it was not a sales success. This was Jean-Claude Biver in his most humble state, admitting that he simply didn’t have enough prior experience to draw from in predicting the success of a TAG Heuer smartwatch. Nevertheless, the original Connected product was a well-thought-out joint effort by TAG Heuer, Intel, and Google. Mr. Biver knew when TAG Heuer couldn’t go at it alone and enlisted the help of companies that he knew were important for the success of the product. He continues to offer enormous accolades to Intel for their help with the project. For the TAG Heuer Connected Modular, TAG Heuer will still rely on an Android Wear operating system (though a newer version of it), but Mr. Biver now claims that the watch was entirely designed and developed in-house. Of course, that means production will likely be aided by a range of important third-party suppliers. With that said, TAG Heuer now claims to have a dedicated assembly line in Switzerland to producing smartwatches. This shows that the Swiss watch industry is taking more charge over how their smartwatches will look and feel – which is likely a very good thing when it comes to the product design and wearing experience. The TAG Heuer Connected Modular adds the “Modular” part of the name to the smartwatch – with people now wondering what it means. Some have correctly wondered if the implication of “Modular” is that the strap and outer-case will be separate from a removable inner-case. The notion being that modules can be swapped out offering different functionality, and even offer a mechanical module in addition to smartwatch modules. If this is the case, then the TAG Heuer Connected Modular may be similar to something like the Halda Space Discovery watch (review here). A challenge for TAG Heuer as principally a traditional watch maker is that it has an obligation to release products which fit into the brand family, as well as promote the core values of the brand – which, like much of the Swiss watch industry, is celebrating the timeless nature of a traditional watch. This can be interpreted as contrary to the focus on technology products which have nothing to do with timelessness and encourage consumers to upgrade on a regular basis. So for TAG Heuer, combating the notion of predictable obsolesce is important.

This notion was not lost on them when they released the original TAG Heuer Carrera Connected which came with an interesting offer to its consumers. Owners of the original Connected watch could trade in their timepiece starting two years from the original purchase date and TAG Heuer would remove the then no longer state-of-the-art electronics hardware and replace it with a traditional mechanical watch core for about $1,500 – the idea being that your product of temporary relevance can be transformed into something more timeless. With the TAG Heuer Connected Modular, the company seems to be adopting the same concept, but in a potentially more refined form. It isn’t exactly clear how it will work, but my understanding is that the TAG Heuer Connected Modular will offer the ability to replace the entire core of the watch, as well as a core which can flip around with a traditional watch face on one side and a smartwatch electronic screen on the other. This approach would allow TAG Heuer to put more production detail into the outer-case while being able to suggest a more expensive initial purchase value proposition. What Jean-Claude seems to suggest in the below interview is that the TAG Heuer Connected Modular has a case which flips – with one side being a more traditional-style watch face, and the other side being a smartwatch. Thus, the watch has two modules in it already – and the wearer can flip it around to see the side they want to at the moment. Even at TAG Heuer this idea is not unprecedented. Back in 2003, the brand released the TAG Heuer Monaco Sixty Nine watch, which was a dual-sided watch that had a traditional analog dial on one side, and a digital dial on the other.