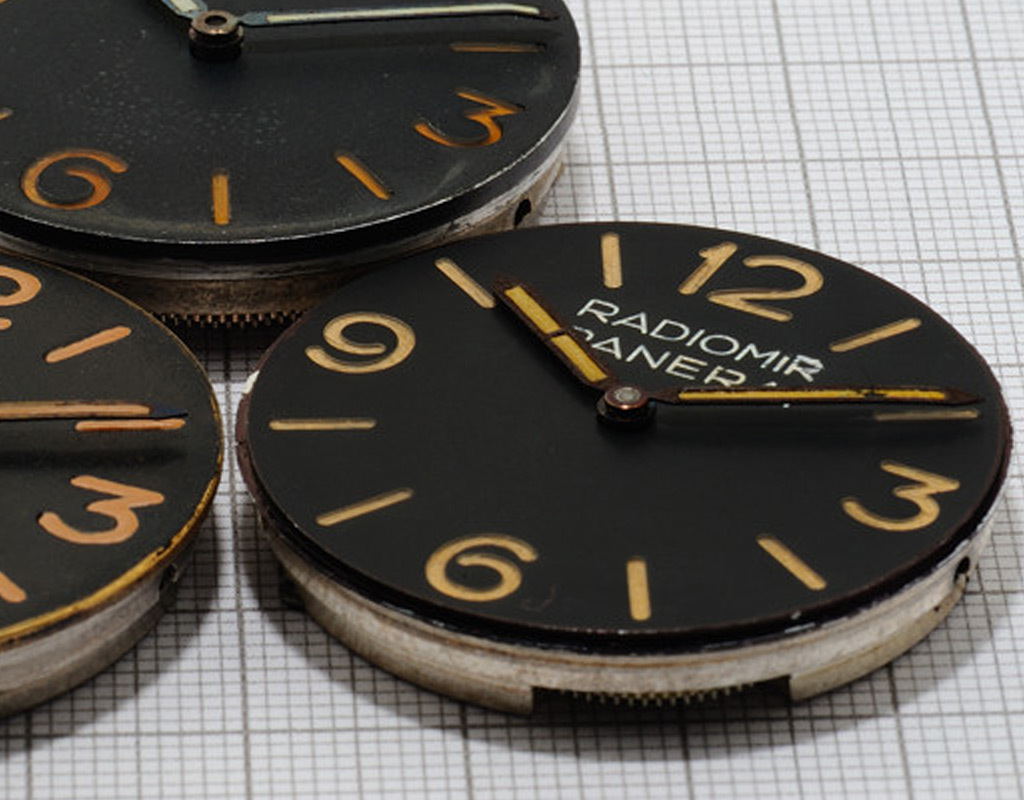 The majority of this article is an interview with the insightful Panerai lover Mr. Jose Pereztroika who, in addition to being an accomplished designer, is what you might call a “forensic watch historian.” His passion for Panerai, as well as vintage Panerai watches and the brand’s history, has led to some rather surprising discoveries which aren’t always flattering to the people involved. Pereztroika has been slowly chronicling his research on specific historic Panerai watches and the circumstances around them on his website Perezscope. The site is a more watch-focused tome of research that, in my opinion, sits nicely next to the more general people- and history-focused Jake’s Panerai World website written by Jake Ehrlich.

Delving deep into the history of a major watch brand – especially one that so focuses on its own history – can be tricky business. Watch brands rarely kept sufficient records, and over the years with natural loss (and through various business ownership changes), it is understandable why it really takes an expert to sort out the “truth.” This is particularly important in an era when so many luxury brands (watches or otherwise) use history and heritage as a vehicle to “legitimize” themselves. Such concepts are by nature easy to manipulate and often have only tenuous to tangential relationships with the current ownership, operation, and business structure of the brand’s modern analog. Since the late 1990s, when Panerai experienced a resurge of popularity (often and likely correctly attributed to actor Sylvester Stallone), the brand has become the darling of many collectors and was soon acquired by the Richemont Group (then known as Vendome). Today’s Panerai continues to produce timepieces in line with the theme of the brand’s historic pieces which benefit from combining that rare mixture of being both purposeful (utilitarian) and beautiful. Some might astutely argue that Panerai is also stuck in a sort of endless loop of design, being required to focus on the past, while not able to truly evolve into the future aside from using new materials, movements, and complications. With that said, Panerai undeniably produces some deeply appealing timepieces.

No single interview can extract the wealth of knowledge that Jose has acquired, and as a Panerai researcher, he continues to closely inspect watches, images, documents, and other historical materials in order to discover the truth about a brand he admires. Pereztroika is particularly interested in how specific Panerai watches changed over time. He identifies what he calls the three states of Panerai “watch manipulation” over history. This began with the brand’s actual relevance to Italian military operations, during which time watches needed to be repaired and thus had parts changed. Later, in the 1980s and 1990s, collectors made a series of additional cosmetic repairs or even enhancements. Pereztroika considers these two periods to be the most pure, being a “natural” part of Panerai’s history.

It is the third state of manipulation, in the post-1997 era, that Pereztroika “warns” of, when he claims that historic watches may have been fabricated and that history was “distorted” by a series of parties including collectors and vendors looking to benefit from the growing consumer enthusiasm for the brand. Pereztroika’s ongoing mission which he details on his website is to uncover the authentic history as he see it and to help safeguard the truth behind a brand that he is a serious fan of. His endeavors with Panerai are not unique. Other popular watch brands have similar glitches in their history and “odd” historic models whose provenance and creation are mysterious at best. In the auction world, where vintage timepieces are often sold, the concept of caveat emptor is very much alive and well, and it requires enormous amounts of information, intelligence, and education to know what is and isn’t truly authentic much of the time.

With that said, please enjoy the below interview with Jose Pereztroika of Perezscope, and keep in mind that watch history – like most history – continues to evolve…

Ariel Adams: Tell me about your website and why you write it?

Jose Pereztroika: Since my very first encounter with Panerai, I have been fascinated with these watches and their history. Over the years, as a hobby, I collected every single tidbit of information I could find. As a result, I slowly started putting together pieces of the vintage Panerai puzzle that most collectors don’t even know exists. All kinds of bizarre and fascinating anomalies started to unfold.

I have spent countless hours studying movements, dials, cases, etc. I gathered a lot of information from the research of companies like Cortebert, Angelus, and Montilier, renowned suppliers of movements to Rolex. I further took Rolex pocket watches and the Rolex history into consideration. Tons of data came together, and more than 400 well-documented Vintage Panerai watches have so far found their way into my database.

Current publications focus almost exclusively on vintage Panerai. Thus, all available information put forth to date about the movements is lacking and highly incomplete. I want to open up the field of vision and share a new and fresh perspective.

Perezcope.com – Vintage Panerai Watches Under the loupe – was launched in 2015 to publish and showcase all my findings on the legendary watches made by Rolex and G. Panerai e Figlio for the Italian Navy. JP: Vintage Panerai is a large field. There might be only a few references, but evaluating every single watch will take some time. I have documented over 400 vintage Panerai watches, so I feel over the course of the next years, I can accurately publish them by creating a highly visual online taxonomy on Perezcope.com. Once I feel the major work is done, I will certainly focus on other brands.

AA: You spend a lot of time analyzing watch lots at auctions. What goals do seek to accomplish by doing that? What are you looking for?

JP: The archives of auctions houses are amazing, and essentially, they allow me to time travel. The auction houses offer snapshots of a watch at a specific moment in time. I began to notice how certain watches changed appearance from one auction to the next, or how the dial of a watch suddenly reappeared in another reference a few years later. This made me think, and I started to dig deeper. In my opinion, there should be more transparency. Every alteration that occurred in the past 15 years is alarming, and should be documented and fully disclosed in the description. AA: How did you originally get interested in vintage Panerai watches and how did you gain expertise?

JP: I first stumbled upon Panerai in 1998. A fellow worker and friend at the advertising agency where I worked showed me a Panerai Luminor Marina on the internet. He explained to me that these watches had been top secret for decades as they were part of the equipment of Italian military frogmen during WW2. He also mentioned that there was some sort of connection to Rolex. My mind instantly started to create images of adventure, courage, and dangerous situations. As a kid I grew up with Italian folks, and I remember sitting on their window sill and looking at old comics of Italian frogmen.

I owned several Richemont Panerai watches over the past fifteen years, but have since sold most of them. In my opinion, they are only an approximation of Vintage Panerai watches made by Rolex. I started to research these watches as a preparation to ultimately acquire one. By the end of 2012, I stumbled upon a forum where people build similar watches from scratch using a combination of aftermarket and original parts. I was stunned to learn how much these astute enthusiasts knew about Panerai and about how to convert alarm clock movements. I was stupefied by their pursuit of perfection and by what is possible nowadays.

Aftermarket parts are getting better each day, and I see a lot of potential for causing harm in the future. I noticed that a few vendors don’t fully disclose converted movements when selling on eBay, and unfortunately, some of these parts have already entered the genuine vintage market.

However, to my total surprise, I discovered the same level of work and similarly converted movements in supposedly all-original pieces, which really freaked me out. Suddenly, I encountered a blurred line which I was not expecting to find.

Knowing how something is made is always an eye opener. It helps you to understand what you are looking at. There is a lot of insight gained through a deeper understanding of cause and effect. For instance, when you see an altered movement ring with recessed casing screws, you understand immediately that the movement inside this watch must be thinner than usual – since it is obviously sitting lower.

I studied architecture and industrial design in Switzerland. For more than 17 years, I have been working as an Art Director for digital communication. I am a very visual person with a good memory. This and my technical background are very helpful in this field.

Personally, the movement is the most interesting part of a watch. They were produced in batches and each batch has individual characteristics. Once you learn how to read a movement, it starts telling you a story.

All mechanisms used in vintage Panerai watches have their roots in the 1920s and 1930s. The companies which produced them, unfortunately, disappeared during the Quartz Crisis (Quartz Revolution) in the 1970s, and as a result, most information was lost. Retrieving all the necessary data is literally an archaeological act.

I cataloged hundreds of pocket watches and alarm clocks made by movement suppliers such as Cortebert, Angelus, and Montilier. I also purchased the most important pieces in order to carefully take them apart for an in-depth study and comparison. As a result, I created and shared visual timelines to show how these movements evolved over time.

Some movements used in vintage Panerai watches might be more elaborated and refined than their brothers found in pocket watches, but they are essentially the same and bear the same amount of Geneva stripes at the very same angle. This led me to believe that Rolex 618 calibers were completely manufactured by Cortebert without any contribution by Rolex Biel/Bienne (Ex Aegler).