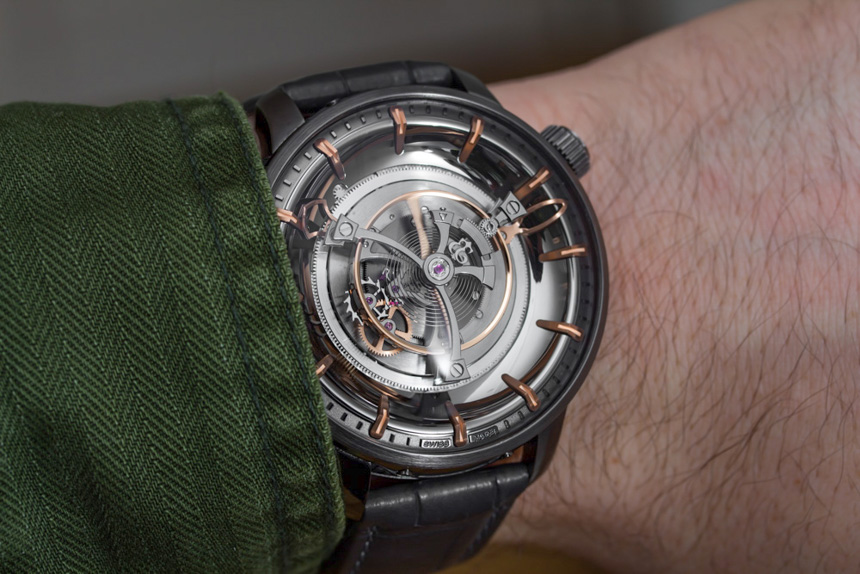 A chance encounter at Baselworld 2017 allowed me to discover the “biggest tourbillon watch” to date in the flesh, as someone walked up to me in order to share it seemingly at random. These images are not on my wrist, but I did have a chance to inspect this noteworthy “superlative” watch. By that latter statement I mean a timepiece, that for at least a moment, has a superlative rank in a particular category. For now, if you want a large-sized tourbillon in a wrist watch, then the Kerbedanz Maximus reference KRBTM49-054WL is for you. All images by Marko Koncina

A large tourbillon is sort of like having a large yacht. It isn’t just that you want to make it clear you have a yacht, but you also want to make it clear that you think size most certainly counts. Though, unlike on a yacht, extra size in a tourbillon will not grant you more guest quarters. Nothing other than the sheer ability to show off is in store for the buyer of the biggest tourbillon. “Maximus” is an apt name for such a product, where the goal is the promotion of size, even among otherwise exclusive products. I jest with the notion of size not only because Kerbedanz (I highly recommend making rapid pronunciation of this company’s name a staple at any round of drinking games) makes the size element of the concept forward in both the the name and design, but also because it is the single most emotional topic among watch collectors. Few people can agree on size. I personally say that people should just go with what they subjectively like, and ideally not throw that fact in the face of others. While the Maximus is an authentic piece of fine horology, it is also a watch that arguably ignores my preferred rule that in a polite society “ye shall not flaunt one’s size in another man’s face by means of wrist or otherwise.” Here’s a quote from the Kerbedanz website: “Maximus is a surname and superlative adjective, derived from the Latin Magnus, which means ‘great,’ and Maximus therefore means ‘the greatest.’ No other name could be better suited than ‘Maximus’ to designate this exceptional model of Kerbedanz. The precision of the mechanical movement is ensured by the largest tourbillon for wristwatch of the world.” Kerbedanz designed it to be a six minute tourbillon, and when combined with the modestly steady 2.5Hz (18,000bph) beat of the balance wheel – makes for a pleasantly mesmerizing mechanical viewing experience. Given the large size of the tourbillon assembly, the watch needs some heavy duty mainspring power. Manually wound, the four barrels together manage to offer 48 hours of power reserve. That is acceptable, but consider that the same number of barrels in movements which require less power can keep a watch going for over a week. While it isn’t easy to see, the caliber KRB-08 movement does have a power reserve indicator on the movement visible through the caseback – an important and appreciated detail. I should also mention that you don’t wind the watch as one might normally via the crown. No sir, the Maximus needs maximum torque when it comes to winding power. So in order to wind the watch, you need to take it off and place your fingers on the caseback and turn it. This isn’t quite the same system as the Ulysse Nardin Freak for winding the movement, but the same idea applies. Thus, in order to appreciate maximum tourbillon-age on your wrist, you’ll need to wind the Kerbedanz Maximus in a somewhat uncomfortable way about twice a week. That also translates into a water resistance of 30m for the case.

The tourbillon is produced from titanium, which is what I also recommend as the case material for customers purchasing this watch. It will allow it to wear more comfortably (because it is lighter), and fits the theme better. Then again, with a name like Maximus, you know at least a few of the potential clients will simply have no choice but to succumb to their whims and order the watch in gold. From a technical perspective, the watch movement has a lot of custom parts, but nothing ground-breaking in terms of technology. It appears, for the most part, to be an exercise in beefing up the size of parts to accommodate the size of the large, centrally-mounted tourbillon cage. The movement is made up of 415 parts in total, and offers just the time with the tourbillon. Time is indicated by two hands which extend from under the tourbillon onto the rehaut. This means of designing the hour and minute hands is practical, but doesn’t offer a ton of legibility. In fact, my biggest frustration with this style of hour and minute hands, is that it is difficult to actually distinguish between the two. Another plus is no logos on the dial. This is a watch which is all about that big ol’ tourbillon front and center. Over the dial is a dramatically domed sapphire crystal that is about as AR-coated as it can be. While watches like the Kerbedanz Maximus make for easy targets when wanting to joke around, items like this make for some of the best “watch toys.” The expressive focus on a particular theme (the largest tourbillon) and the dedication to that theme make this watch worth respecting. Yes, with the big focus on size Kerbedanz is asking for a bit of mockery, but I think it gets its message across. This is a real enthusiast product in the way we used to see from brands like Franck Muller (both Franck Muller and Kerbedanz are actually run by Armenians in Switzerland, which is an interesting bit of trivia). While I’m not the target demographic of the Kerbedanz Maxiumus because I don’t have a big yacht to show off, I do respect the watch and enjoy its unadulterated focus on the cause. It does have a place and there will be enough buyers to help the 99 pieces in the limited edition dwindle relatively quickly. Best of all is the price, that while certainly in serious high-luxury territory, feels like 150,000 Swiss Francs less than what a similar watch would have been priced at circa 2009. Price for the reference KRBTM49-054WL Kerbedanz Maximus watch is 165,000 CHF. kerbedanz.com