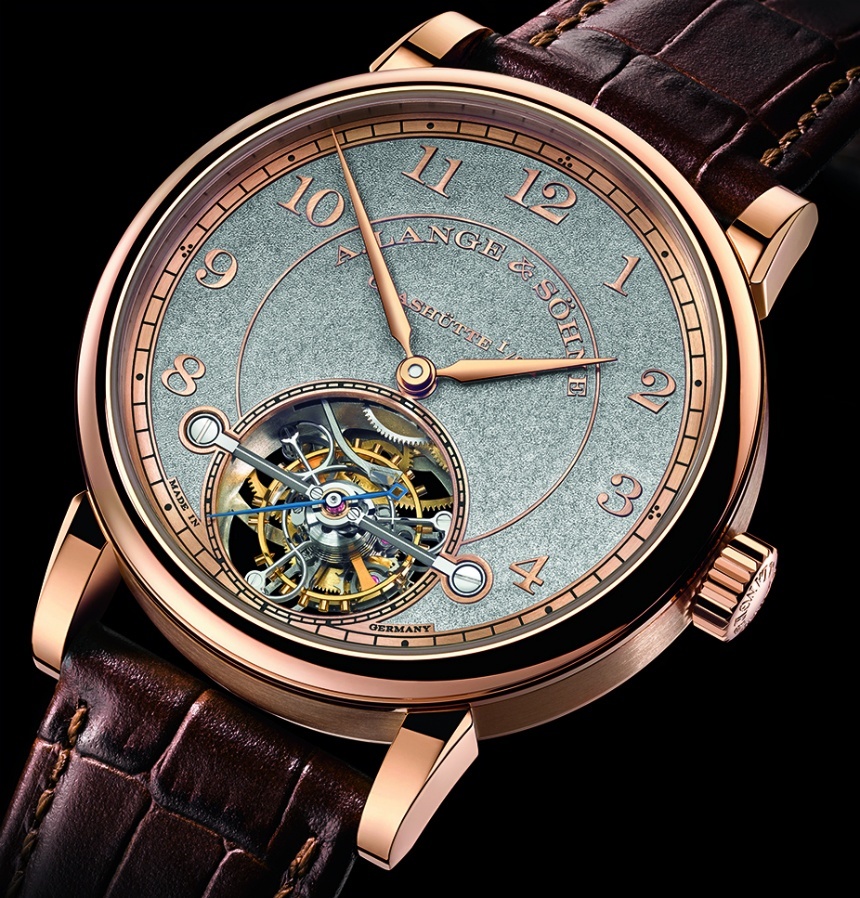 Just a few days ago, A. Lange & Söhne released the 1815 200th Anniversary F.A. Lange watch, celebrating the 200th anniversary of the birthday of Ferdinand Adolph Lange. The latest release in anticipation of SIHH 2016 is the new A. Lange & Söhne 1815 Tourbillon Handwerkskunst. Handwerkskunst is the german word for “artisanship,” and for a watch from Lange to earn that distinction likely isn’t an easy feat for the watch makers involved. What makes them special isn’t so much about what’s going on in the watch but, rather, the engraving and work put into the dial. In 2014, the A. Lange & Söhne 1815 Tourbillon was released, and it boasted some impressive features that were not apparent just from its name. Aside from having a tourbillon that shares a cutout with the seconds dial, the watch married two features in a way that had not been done before. Lange is known to be the first company to create a tourbillon with a stop-seconds device in 2008 with their Cabaret Tourbillon, meaning that when the wearer pulls out the crown, the tourbillon also stops, and this allows for increased precision when setting the time. With the 1815 Tourbillon, they took this innovation a step further, with the Zero-Reset complication in conjunction with the stop-second tourbillon. Upon pulling the crown to set the time, the Zero-Reset function has the seconds hand jump to zero – visually and mechanically in a very similar way to how the chronograph seconds hand resets to zero. According to Lange, having these two complications together allows the wearer to stop and set the time to within one-second accuracy. The case back of the 1815 Tourbillon

This A. Lange & Söhne 1815 Tourbillon Handwerkskunst version runs on the same L102.1 manual wind movement that features the aforementioned tourbillon with stop-seconds and Zero-Reset. There is 72 hours of reserve power for the watch. Additionally, the movement is made up of 21 jewels and 5 gold chatons. Altogether, you are looking at 262 parts that make up this movement. The tourbillon cutout is big, which is definitely a plus since the deep view of the inside of this watch is a treat, even in photos. The watch is discreetly sized at 39.5mm wide and 11.1mm thick. Getting back to that artisanship that makes this limited edition of 30 watches special, the dial of this version is made of a black-rhodiumed pink gold with tremblage engraving. To make the surface smooth, Lange uses a special lining burin which still allows the granular look that makes this dial unique – if you want to see a different, arguably more traditional kind of “out-of-this-world” engraving from Lange, check out our article of the Lange 1 Tourbillon Perpetual Handwerkskunst here. Of note, the reason behind the granular look is to harken back to the days of historic pocket watches. Moving on, the brand logo and numerals lend a beautiful contrast to the dial that really makes this reserved timepiece have a bit of flair. The picture of a stunning watch dial is made complete by the mirror polished tourbillon bridge and the high-polished upper part of the case.

This limited edition A. Lange & Söhne 1815 Tourbillon Handwerkskunst watch comes on the same brown crocodile strap as its non-limited sibling. The 18k pink gold 1815 Tourbillon was priced at $164,100 while the platinum version was $201,300. The price for this limited run of 30 pieces conveniently falls right in the middle, at $181,000. alange-soehne.com