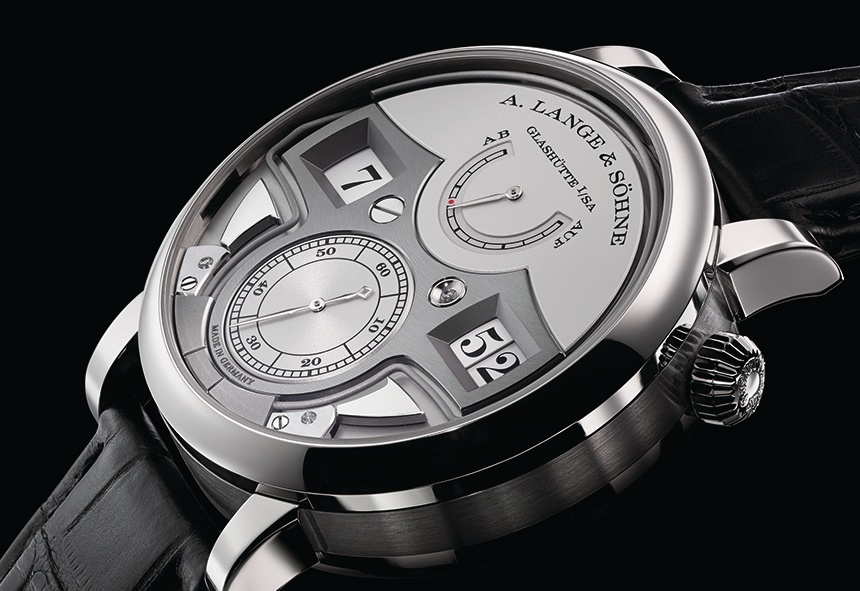 Every year, A. Lange & Söhne presents one mega important watch and this year’s hero piece is arguably the Zeitwerk Minute Repeater. The original Zeitwerk watch was first released in 2009 and is today still the brand’s most unique and distinctive piece. You see, most of A. Lange & Söhne watches, such as the Datograph, Saxonia, and Lange 1 are all arguably classically designed, and the A. Lange & Söhne Zeitwerk is unusual because it displays the time digitally. The only thing traditional about it is its case design, with the subsidiary seconds dial and the power reserve indicator at 6 and 12 o’clock respectively. Even the movement, though decorated classically, is a tour de force in haute horology, featuring many innovations including a patented jumping hour mechanism. On the surface, the Zeitwerk Striking Time and A. Lange & Söhne Zeitwerk Minute Repeater may be confused for being the same watch. It doesn’t help that both watches look similar to the untrained eye. But visual differences aside, the important thing is that the striking time complication and the minute repeater complication is not the same. The Zeitwerk Striking Time only sounds the full hours and quarter hours. Additionally and crucially, it cannot chime on the demand. The A. Lange & Söhne Zeitwerk Minute Repeater can chime the time on demand and more.

To begin, it is necessary to appreciate that most of the groundwork for this watch was laid both in the Zeitwerk Striking Time and also the mega $2.6 million Grand Complication piece from 2013. As A. Lange & Söhne’s Director of Product Development, Anthony de Haas said in an interview regarding the development of the Grand Complication, the goal was to also create the know-how to make striking mechanisms for future watches. Speaking of the striking mechanism, it is worth mentioning now that this is not just any minute repeater, but a decimal minute repeater. Such repeaters are rare and the only ones that comes to mind are Kari Voutilainen’s Decimal Minute Repeater watches (hands-on here). This means it sounds the number of hours, 10 minutes and minutes, which is easy to decipher as opposed to the traditional hours, quarter hours and minutes. A low-pitched tone marks each elapsed hour, while a double tone marks each elapsed ten-minute period, and finally, a high-pitched tone marks the elapsed minutes. The two gongs are black polished and flank the subsidiary seconds dial. They are also visible on the dial so owners can see all the action. The movement in the A. Lange & Söhne Zeitwerk Minute Repeater is called the caliber L043.5, and as you would expect, it is manufactured entirely in-house. Like all A. Lange & Söhne watches, the Zeitwerk Minute Repeater has a hand-engraved balance cock. It beats at a relaxed 2.5Hz, has a power reserve of 36 hours, a remontoir mechanism, and features a whopping 771 components. To protect the exquisite movement, A. Lange & Söhne has also introduced some safety mechanisms. For instance, the crown cannot be pulled out when the striking mechanism is active. Also, the digital display of the time will not jump when the watch is chiming and will only update itself once the chiming sequence is complete. However, should the time have advanced while the watch is chiming, it will chime the updated time. Additionally, to ensure that the watch has enough power to chime, the striking mechanism cannot be activated if there is less than 12 hours on the power reserve – this is marked by a red dot on the power reserve indicator.