As we have said many times here, dive watches are a popular style, whether it be for those looking to get a new watch, or a brand looking to launch a new model. Mix in the fact that many newer brands are relying on crowd-funding to get the ball rolling, and you can accurately surmise that there are a lot of dive watches available on sites like Kickstarter. Today, we have a hands-on look at one of the currently-funding models, the ManchesterWatchWorks TatoskoQ.

Before we get too far in to the review, I will tackle two questions that are likely on most everyone’s minds – what in the world inspired that name, and why are we talking to you about a quartz diver? First up, the name. Everyone these days is familiar with the Loch Ness Monster, right? Well, here in the States, we apparently had our own “Nessie” that predated the Scottish one. In Lake Champlain (in Vermont), the Abeenaki people believed there was a massive beastie in the water, one they named Tatoskok. Swap that last “k” for a “Q,” and you have a water-borne watch. That “Q” also conveniently identifies the watch as a quartz-driven model. We do not often feature quartz on these pages, so it is worthwhile to answer why we would discuss this particular one. When we bring a quartz piece to your attention, it is often because it is giving us something different, or of note, that we have not seen before. For the ManchesterWatchWorks TatoskoQ and its Swiss Ronda 715Li movement, it boils down to styling.

There are some subtle cues, such as indices that mimic a diver down flag, and a nice selection of customization options (more on that in a bit). The most interesting bit of styling, though, is courtesy of the dial. It has a texture unlike anything I have seen before. Taking a closer look at it, you can see that it very much imitates the look of wet sand (such as you would find underwater). This is, of course, a nod to the watery tendencies of the watch, but it also gives a nice bit of texture to the dial without obscuring legibility. Let us move on to the customization options. The prototype we were sent for the hands-on is what you could call the base model. The 42.5mm case is in high-polish, there is no date display, the strap is a simple rubber one, and the handset and bezel are the ones the project launched with. However, should you not like any of those options, you may have them modified to match your preferences.

First up: the case. You could instead opt for a PVD black finish, or go with a bead-blasted look (which I think is my favorite of the three for a tool watch like this). Next up, on the dial, you can have a date display (unfortunately, the date wheel is in white and not black). On to the strap, which you could swap out for a nylon strap that MWW did a custom “sharp” pattern on, which I feel is going to be quite popular. The last two options are something that have cropped up later in the the project: a choice of bezel and handset. Our prototype has the original bezel, which has the minutes scale up to 20 minutes, and then just gives you five minute increments after that. The other bezel instead has small marks for every minute around the dial (along with the major 5 minute hashes). You could pick one or the other, or, for simply $5 more, you could end up with both bezels.

Handsets, of course, you really can’t change out yourself (well, at least I cannot). The standard they started out with is what I’ll call a broad arrow sort of a design. I like this style for two reasons. First off, it is a rather uncommon style, especially for divers. Second, with their larger size, they make for rather excellent legibility. Should you not particularly care for the style, though, you can get a more common “stick” style of handset, with the seconds hand switching from a square to a triangular tip. All this customization aside, the fact still remains that this is a watch you would likely be living with on a semi-regular, if not daily, basis. In that aspect, the ManchesterWatchWorks TatoskoQ performed admirably. For a dive watch, it is remarkably light (only 102g), which certainly helps with the comfort factor. The rubber strap itself is not anything particularly special, but it does certainly help to keep the watch from sliding around your wrist, which is something that can sometimes happen with a bracelet.

I found the watch to be eminently readable at a glance, with some rather nice details to be found for those who actually are acquainted with diving. Oh, and yes, this can be used easily as a dive watch, as it carries a 200 meter water resistance rating, complete with the screw-down crown and AR-coated (on the underside) sapphire crystal. If, like me, you are limited to desk diving, this is still a solid daily watch. In the end, a dive watch is a tool watch, and these sorts of watches are built (or at least, should be designed) to stand up to the rigors and abuses of regular life, whether or not they are being put to their intended use. And if you know you will not take the watch any deeper than your local pool, then the date display variant may give you more flexibility.

To wrap things up, let us go back to one of the initial questions I answered – why are we talking about the ManchesterWatchWorks TatoskoQ, out of all the other crowd-funded watches that have come and gone, and are currently out there? First and foremost, it is because the styling, particularly on the dial, is offering something quite unlike anything I have seen before. An additional answer is that I believe most everyone has room in their collection for a quartz-driven tool watch, and divers are particularly popular in that category. There is something to be said for a watch you can leave sitting in the drawer for weeks on end, and pick up and have it be running (and accurate). In fact, with this watch, you can do that for a 10-year span before changing the battery.

The ManchesterWatchWorks TatoskoQ closes funding on November 7th (project page), with pricing starting at $198 as of the time of this writing. Once funded, the production will start (and this will be the first and only run for the ManchesterWatchWorks TatoskoQ), with delivery anticipated to be in February of 2015.  You can also jump in on a pre-order for a mechanical version of the TatoskoQ for $230. manchesterwatchworks.com

Necessary Data
>Brand:  ManchesterWatchWorks
>Model: TatoskoQ
>Price: $198 and up
>Would reviewer personally wear it: Probably not – it’s a nice diver, but it would compete for wrist time with the mechanicals
>Friend we’d recommend it to first:  This is for the person who is looking for a more subtly-styled diver with the long term accuracy of a quartz
>Worst characteristic of watch:   The wide bezel can make the dial seem small
>Best characteristic of watch:  It has to be the “wet sand” dial 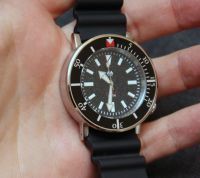 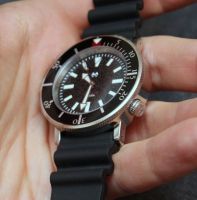 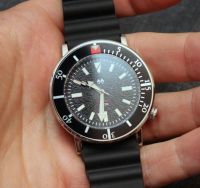 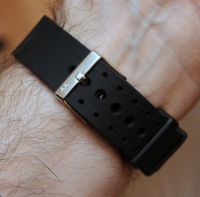 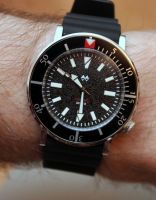 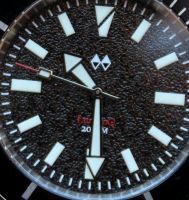 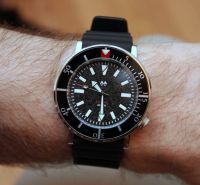 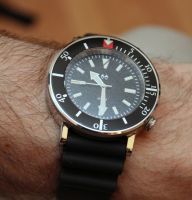 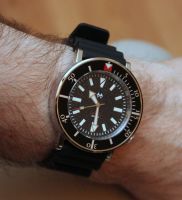 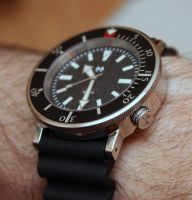 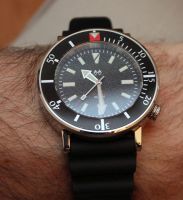 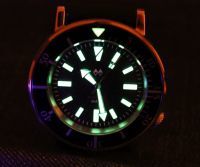 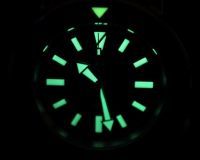