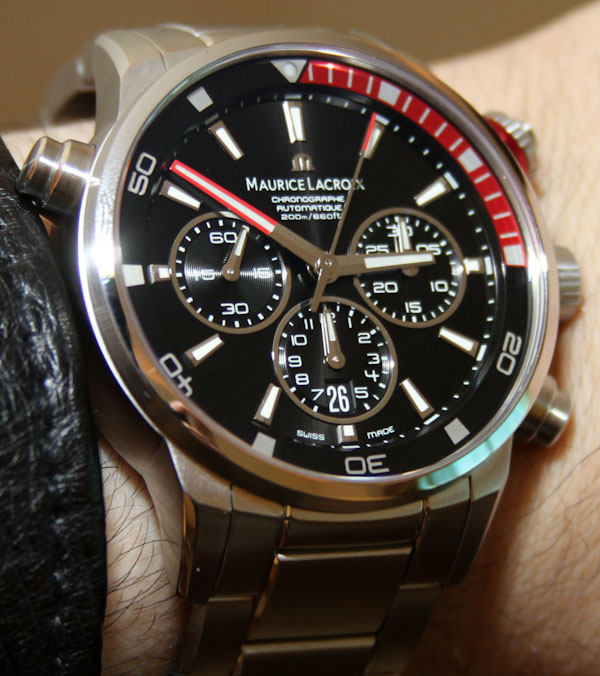 The most impressive new Maurice Lacriox watch this year is easily the Pontos S Diver. I think Maurice Lacriox eventually dropped the “Diver” part of the name. Who knows why – I am still going to call it the “Diver.” I first discussed the Pontos S when debuting it to the world here. Now with a hands-on look at the final versions I can once again say “I like it.”

It is interesting to understand why I like the Pontos S. There is nothing extremely innovative or fancy about this diver. It is a very unremarkable watch on paper given all the other watches that have the exact same features. What it does have is a clever design which mixes “familiar” with “I haven’t seen it done like that before.” It has the right mixture of colors for flair, options for choice, and legibility for daily wear. It is normal enough to be welcome to most people, with just enough excitement to fend off boredom. Wow, that is so super Swiss. Maurice Lacroix offers four versions of the Pontos S diver right off the bat. The highest-end version is the red-accented model which features a different movement. Why make one of the four models with a totally different movement? No idea. It is one of those mysteries that simply makes things interesting. Even Maurice Lacroix’s US distributor isn’t sure why that is. It is further possible that the red version will be limited in production.

At 43mm wide, with a thinner bezel, the Pontos S is a great size for most wrists. While the dial looks large, it won’t sit massively as some fear with pieces 44mm and above. Plus, the case is thick enough to allow it to feel “less than puny.” Dial design is downright elegant in its highly contemporary design approach. There is a dash of futurism in the design of the dial and pushers. How will the design age? Hard to say, you’ll need to strap it on your wrist for a few months or years to find out. The trick internal rotating bezel is a technical highlight of piece. Maurice Lacroix designed the inner bezel to be operated by a crown that is integrated with the top chronograph pusher. This eliminates the need for an additional crown – and sorta looks cool. However, the red version of the Pontos S does have an extra pusher on the left side of the case – that is for adjusting the date because it has an ETA Valjoux 7753. The other three models have ETA Valjoux 7750 automatic chronograph movements. The difference is really just the layout, but more and more I am liking the more symmetrical display of the 7753 and 2894 versus the lopsided 7750. Don’t get me wrong, I have much love for the stalwart workhorse that is the 7750, but it isn’t too often one thinks of it as a sexy beast.

Detailing on the Pontos S is good. You have things like faceting on the bracelet, and the right mixture of polished and brushed surfaces. For an over $4,000 diver without an in-house movement, Maurice Lacroix pushes to give you as much bang for your buck as possible. The affordability (relatively speaking) of the brand is aided by their use of Hong Kong suppliers for a lot of components, mixed of course with Swiss parts. This is the case with many Swiss brands of course. The trick is military like oversight of those suppliers to ensure the stuff they make is good. It is easy to miss the date window on the dial – but it is there as part of the lower chronograph subdial. See it now? I am enthused by the dial design overall, as well as the feature set of the Pontos S. That little hint of extra modernity sells it for me. As a diver you have a healthy 200 meters of water resistance that will be suitable for all but actual professional dive use. Though you need to choose if you are a red, white, orange, or blue type of person. You no doubt are irritated (well you should be if you aren’t) that I didn’t picture the pieces with the colorful NATO style straps. I was going to, but the pieces I had available to me were all on bracelets! Though if you’ve seen one or two NATO style straps, you’ve sort of seen them all right? Prices for the handsome and slightly edgy (just enough) Maurice Lacroix Pontos S (diver) watches range from $4,100 – $4,600.