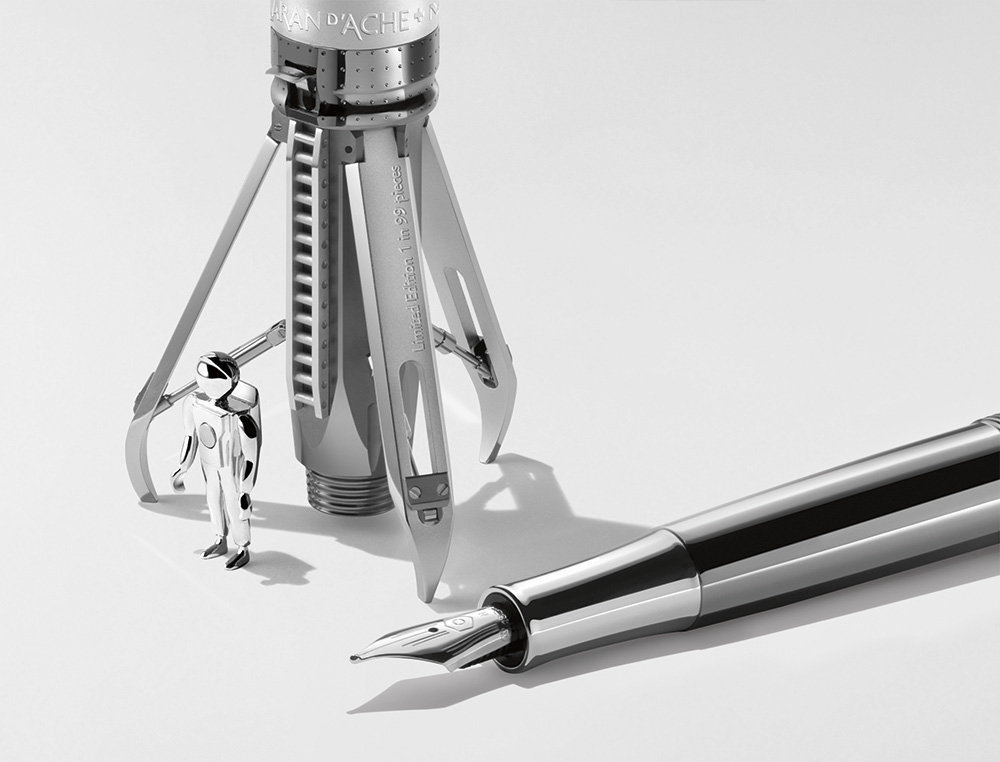 Imagination incarnate. That’s the modus operandi of MB&F, who manages to make the unexpected something of a routine with every wild new release. As though set in some alternate universe from an H. G. Wells novel, MB&F brings a distinct science fiction twist to everyday objects, like a sentient robot clock, a music box built like an intergalactic starfighter, and a watch that… well, just look at this crazy thing. But the latest genre-defying release – the MB&F Astrograph pen made in collaboration with pen maker Caran d’Ache comes some four years in the making, and while a truly unique piece, the design restraint may leave some people desiring something a little bit more elaborate. However, it is delivered as an appropriately out-there set and will fit in perfectly on the desk of an MB&F collector.

Richard Mille released their $105,000 RMS05 pen earlier this year, and while MB&F went in a different direction with this piece, they also decided to keep it well below the six-figure mark at about a fifth the price. Despite the wild categorical expanses between each release (clocks, music boxes… now pens?), there’s a distinct pattern to the madness – a re-occurring theme wherein MB&F collaborates with the most capable Swiss manufacturers and artisans across various fields to bring founder Maximilian Büsser’s ideas to life. Similarly to the past instances where MB&F partnered with renowned clockmaker L’Epée for various robot clocks, the vision of the Astrograph and Büsser’s childhood dream of space travel is realized by Caran d’Ache – and was one that would be the luxury writing instrument workshop’s most complex project ever undertaken. An ordinary fountain pen could have as few as five individual components, or as many as twenty for those on the more technical end of the spectrum. But MB&F looks down on the “technical end of the spectrum” from a telescope in the stratosphere – as the MB&F Astrograph is an *ahem* “working” rocket ship comprised of nearly 100 expertly machined, lacquered, and hand-finished components, complete with thruster engines, and landing fins that can be lowered at the flip of a switch. Granted, not all of those components are part of the pen itself – which deploys from the fuselage along with the nose of the ship, as a perfectly proportioned, ultra high-precision writing instrument. Oh, and lest we forget, the whole package also includes a rhodium-plated, magnetized astronaut figurine that can hitch a ride anywhere on the rocket where the physics of space travel would permit. When not joyriding across the cosmos, the MB&F Astrograph can be stored vertically atop, or safely inside its launch pad-inspired display, which comes fitted with its own three articulated legs for launch day. The MB&F Astrograph will be available as either a fountain pen or a roller pen in three distinct finishes: high gloss rhodium (fountain only), sandblasted matte rhodium (fountain or roller), or ruthenium anthracite (fountain only), with each finish limited to 99 pieces only. Collectors looking to blast off with the MB&F and Caran d’Ache Astrograph may do so for a price of $19,900. Not inexpensive by any means, but for the collector with a sense of whimsy who might still be a child at heart? It can certainly add a sense of fun on the desk that’s likely already populated by the various clocks and other creations dreamed up by MB&F. mbandf.com