The MB&F HMX watch celebrates the 10th anniversary of the landscape-changing Geneva-based Swiss watch maker founded by Max Busser. “HMX” means “Horological Machine 10,” but that should not be confused with its numerical order in the collection because it would really be the HM7 after last year’s MB&F HM6 (hands-on here). With that said, the MB&F HMX is most closely related to MB&F HM5 watch – that shares a similar concept and visual form. Though compared to the HM5, the MB&F HMX is about half the price.

A special motto engraved on the rear of the MB&F HMX watch on the rotor really sums up what MB&F is all about – at least in the eyes of Max Busser. “A Creative Adult is a Child who Survived” spells out the emotion behind developing a brand which began not to sell “watches,” but “horological art.” Over its 10 years, MB&F has remained impressively true to its original mandate set forth by Mr. Busser – and that is to release time-telling art inspired by the things he and the MB&F team held important during their youth. What we’ve learned since 2005 is that Max Busser loves planes, cars, and space ships.

MB&F added a shiny coat of professionalism and refinement to the independent watch company landscape. They were one of the first “strange” and non-traditional super luxury watch brands to earn the respect of the larger, more conservative industry. Max Busser really began his mission while heading the watch division at Harry Winston (where he started the Opus project) and continued it at MB&F, building on the concept of creating amazing things by working with others.

MB&F has done so much for putting the watchmaker at the forefront of haute horology. The mega brands are often most interested the promotion of their brand names above the effort of the human talent involved in creating their products. What really separates the independents, in my opinion, is their tendency and preference to promote the individual. Independent brands are also free to make risks. Often times, their entire businesses are risks, and in order to differentiate themselves, they must take chances with watch designs – gambles that don’t always pay off. With that said, Max Busser succeeded with his risky venture, and in my opinion, has been instrumental in changing the face of modern timepieces whether or not you are a fan of the brand’s work. At $30,000, the MB&F HMX is the least expensive wrist watch MB&F has ever released. Of course, some of their other items such as the MB&F MusicMachine cost less, but they neither tell the time or are wearable. So consider the MB&F HMX to be the “most affordable” MB&F watch ever. Consider that the MB&F HM6 Space Pirate watch cost $230,000. Of course, the MB&F HMX will be part of a limited edition, which from the start is segmented into four color variations, each produced as a set of 20 pieces. This is also the first time MB&F appears to be focused on introducing a product of this nature with a series of available bright colors.

According to MB&F, these colors are racing inspired – well so is the MB&F HMX overall. The MB&F HMX, like the HM5 watch is a “wedge-style” driver’s watch, where the time is indicated not on the “top” of the watch but to the side. The idea is that when your hands on on a steering wheel or some other type of control, you don’t need to remove or turn your hands in order to read the time. Like the HM5, the MB&F HMX uses a sapphire crystal prism to shift the view of the discs which tell the time to the side, yet the execution is a bit different. While the HM5 was inspired by 1970s and 1980s era sports cars, the MB&F HMX actually looks like automobiles from the 1960s and earlier – specifically, Italian race cars. Apparently, MB&F went through many designs for the MB&F HMX until they found one that they were happy with. I see this as the MB&F HM5 meets the HM4. Can you see that? Driver’s watch mixed with swoopy lines. The race car inspiration continues into the color options available. These include Lotus black, British racing green, Bugatti blue, and of course, Ferrari red (which is really just Rosso Corsa).

From a materials perspective, the MB&F HMX case is on the most simple side with titanium and steel. There are sapphire crystals on the top to see the “engine bay” for the movement, the front, where you view the time, and under the watch, where the 22k gold rotor is placed. Is it just me, or does the dial look like upside down lips? MB&F isn’t the only watch maker to be inspired by car engine bays – and the way the movement is displayed in the HM5 feels very much inspired in particular by Ferrari. An interesting twist compared to the HM5, at least, is that with the MB&F HMX you can view the movement through the sapphire crystal where you see the time. In terms of dimensions, the MB&F HMX case is 46.8mm (tall I believe) x 44.3mm wide, and 20.7mm thick. That should make it more or less like the HM5, but I have a feeling it will wear smaller thanks to the curvy nature of the case. The various color options add a new flavor which has been more or less absent from MB&F until this point. I think there was a perception that offering bright colors to luxury watches sort of cheapened the experience because it was such a simple way to add “wow,” but thanks to a series of brands (such as Richard Mille), colors are now not only tolerated, but often promoted. In terms of reading the time, this is done via two separate discs, one that indicates the hours, and the other is for the minutes. The system that MB&F developed likely borrows heavily from the HM5, and features jumping hours and “dragging” minutes. This works rather well, but reading the time down to the precise minute might be a challenge. Given the “budget” nature of the watch, MB&F decided to use a base Swiss Sellita automatic movement that is modified with their disc module system. While that does lessen the exclusivity of the watch just a bit, I don’t think it will negatively effect the movement’s reliability. You end up with a 4Hz movement with 42 hours of power reserve and automatic winding – along with that custom rotor. When you look through the “top” of the watch into the “engine,” all you see are the engine-inspired plates and the discs. Unless someone told you there was a base Sellita gear train in the MB&F HMX, you wouldn’t know it.

Each of the four MB&F HMX watches will be limited to just 20 pieces and attached to a two-tone calfskin strap with perforation to offer a view to the fabric which matches the color of the movement. The strap buckle is in titanium. That means only 80 pieces total of what is going to be a really desirable watch, given the design and the price. MB&F has not only produced a special anniversary timepiece that their existing fans will gobble up, but also a watch that should help even more car enthusiasts pay attention to the interesting work that they are doing. Once again, the price of the limited edition MB&F HMX watch is $30,000. mbandf.com 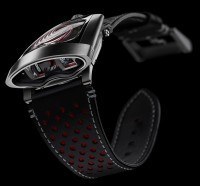 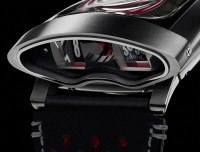 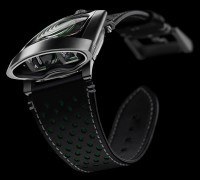 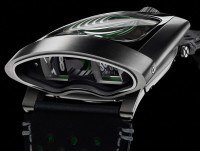 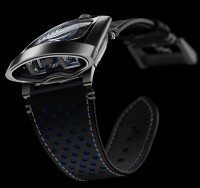 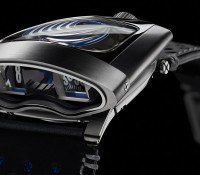 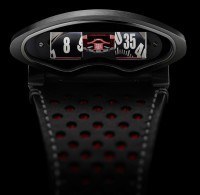 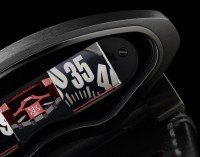 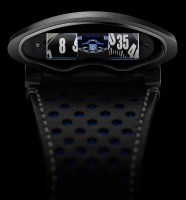 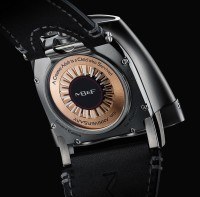 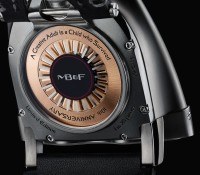