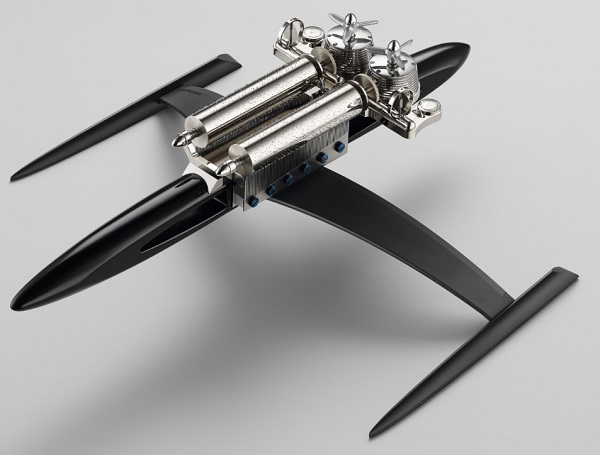 MB&F releases their first non time-telling creation with the MusicMachine music box style desk piece. Produced in partnership with Reuge, the last high-end music box maker in Switzerland, the MusicMachine is an auditory journey through the inspirations that MB&F founder Max Busser uses when conceiving MB&F watches. It isn’t a watch, but rather an item for the desk. The MusicMachine looks a lot like Romain Jerome’s Moon Dust DNA Spaceship pen with its “winged stand,” but this is something totally different.

A few years ago Busser would have no doubt been hesitant to release a non-watch item. However, with the success of the MB&F MAD Gallery and the sale of other types of mechanical art (in addition to horological machines), I think the limited edition MusicMachine will do quite well. It is much more fun than useful, but then again so are a lot of watches. MB&F quite meaningfully meant for the MusicMachine to look like a space ship, and the music box itself to look like an engine. The main body of the MusicMachine is in either white or black piano lacquered walnut wood. Why? For sound amplification purposes of course. Propellers on each of the mainspring barrels serve as winding crowns for the music box, also powered by a spring, like a watch. Air regulators to each side spin as the box is activated. The movement’s main focal point are the music rollers with pins sitting over the combs which produce the sound. Each MusicMachine will come with pins for six melodies specifically select by Busser himself and are less than ironically selected segments from notable scores in Star Wars and Star Trek, as well as classic rock from John Lennon and Pink Floyd. Just what I always wanted, a totally music box version of Dark Side of the Moon.

Try turning this baby on when someone enters your office and playing a snippet of The Empire Strikes back. Even Darth Vader would be proud. In all its cheesiness, the aesthetic is totally MB&F, and the choice of music makes a lot more sense than Mozart and lullaby tunes on a device such as this. MB&F and Reuge will produce just 66 pieces total of the MusicMachine with 33 pieces in white and 33 pieces in black. Price is about 12,000 Swiss Francs mbandf.com reuge.com