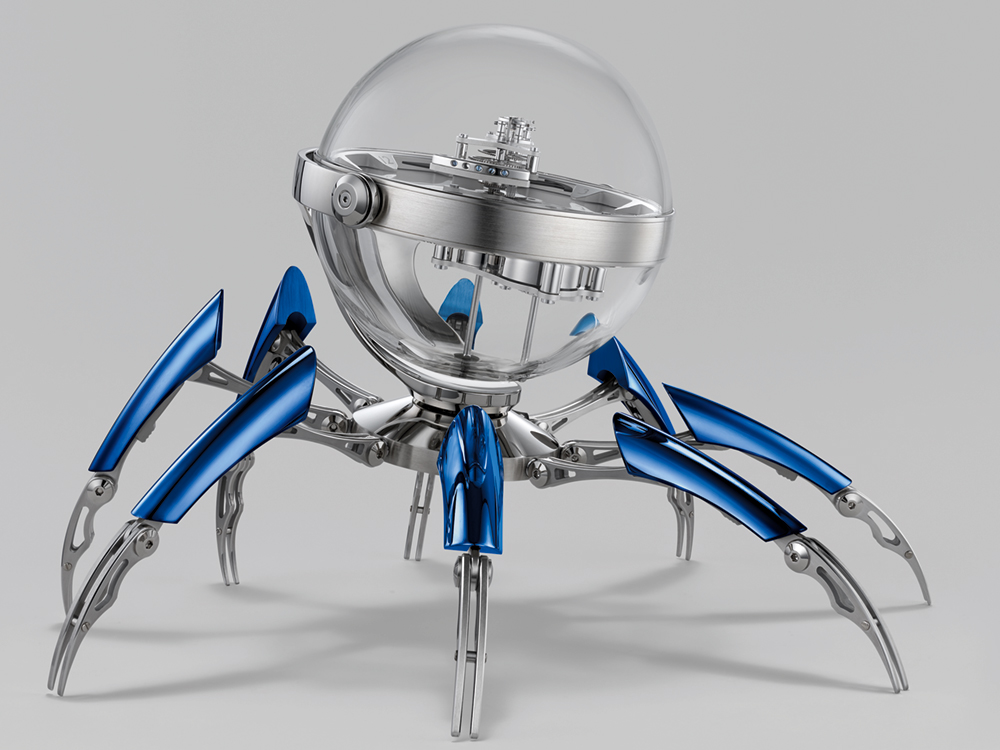 The latest weird clock-art creation from MB&F in collaboration with Swiss clockmaker L’Epée is the MB&F Octopod. Supported on eight spindly posable legs, it is a bubble-like sphere with exposed clockwork displaying the hours and minutes. But MB&F never stops at just abstract visual concepts and must also get mechanically daring in execution. Let’s take a look at both the concept that gets your attention as well as the details and engineering that hold it. MB&F has done a number of imaginative projects with L’Epée, and this is not even the first eight-legged one – see the MB&F Arachnophobia that is a giant time-telling spider here. Okay, MB&F reminds us that octopuses (not octopi), clearly the inspiration, technically have two legs and six arms – but this thing does have eight legs, as its name acknowledges. There have also been various MB&F+L’Epée robot and spaceship clocks, any of them completely fitting for the home or office of an eccentric billionaire genius or Bond villain. Whereas a great number of watch designers seem to be limited in design inspiration to a choice between cars, planes, or diving, MB&F has been into cephalopods lately. The MB&F HM7 Aquapod (hands-on here), whose name even sounds like Octopod, might be more like a jellyfish but it also seems to be a tribute to the freaky and fantastical world of sea creatures. The brand further says that the Octopod references the glass bathysphere from the 1989 James Cameron film The Abyss. No word on the MB&F Octopod’s water-resistance rating, however. The MB&F Octopod was created as a concept by MB&F, but engineered and produced by L’Epée. As noted, it is a glass sphere suspended by eight “legs.” The articulating legs are each made of 31 pieces with different color options of black PVD, blue PVD, or palladium (silver). They can each be released via a button and locked in a standing or extended (“crouched”) position. The legs meet at a circular steel body from which extends a gimbal arm supporting the central glass sphere. The gimbal is on an axis so that the display can be articulated for better viewing – the brand says the gimbal is a nod to marine chronometers that used two-axis gimbals to remain level on boats. In the glass sphere are all the mechanical guts, like the fascinating innards of a translucent jellyfish or alien – but not at all slimy. The entire movement is held in place by a mineral crystal baseplate treated with anti-reflective coating on both sides to create the effect, the brand tells us, of invisibility so that the movement appears to be somehow suspended. It’s kind of similar to the “floating” hands or other parts in “Mysterieuse” clocks and watches by brands such as Cartier, or even the Zodiac Astrographic. The floating effect is kind of hard to appreciate in these brand images, but easy to imagine. Then there is the hand-wound movement itself that MB&F tells us was designed from the ground up by L’Epée. It displays the hours and minutes with the regulator mounted on the minute hand itself. It would be nice to think that this helps average out positional errors, kind of like a tourbillon is supposed to, even as you tilt the dial to different angles – though tourbillons haven’t been proven to improve accuracy. MB&F notes that the counterweight to the heavy minute hand was a particular engineering challenge that was eventually solved with the use of five adjusters. The movement operates at 2.5Hz with eight days of power reserve, and it is wound and set by “double-depth square socket key sets.” All together, the MB&F Octopod is made of 309 parts, weighs 4.2kg, and measures a square 28cm high by 28cm long when in “standing” position. In “crouching” position it will be 22cm high and 45cm long. The “glass sphere” is actually two Polycarbonate semi-spheres joined at the satin-finished three-piece center band. There are even twelve hour markers with 12, 3, 6, and 9 helpfully indicated in Arabic numerals meaning that it should also be able to serve its purpose as a reasonably legible clock – once you get used to it, I suppose – if you choose to actually use it to read the time. What makes MB&F consistently captivating, in my opinion, is not that they merely come up with wild ideas, but that their final products are executed with great care. Part toy, part art, part geeky engineering experiment, the Octopod fits in well among the magical MB&F freak show, if nowhere else. The MB&F Octopod is limited to 50 pieces in each of the three different color versions with a pre-tax price of CHF 35,000. mbandf.com