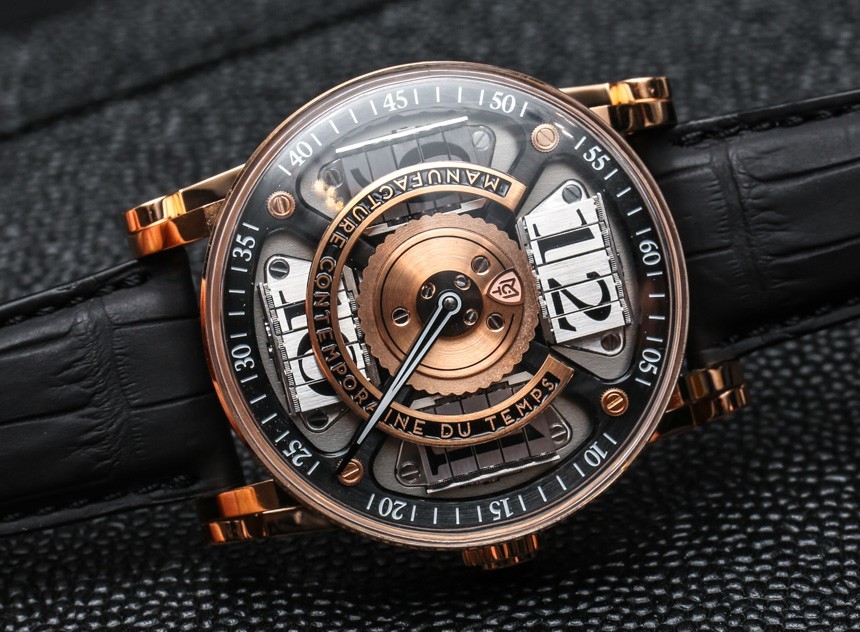 In March of 2014 we debuted the new MCT Sequential TWO S200 watch that built on the legacy of the several year old MCT Sequential One. As one of our favorite new watches for Baselworld 2014, it is a pleasure to offer a hands-on look at this new, highly wearable, exotic luxury watch.

I remember the time when the first mechanical billboards appeared in my city and how much they amazed me with their ingenious triangle-shaped louvers, allowing for the displaying of three different ads in an extremely limited space. And while this idea probably amused me more than I should admit, I remember saying to myself: “Why didn’t I think of this?”

Many years later, I found myself asking the same question again, as in 2010 MCT (or Manufacture Contemporaine du Temps) elevated the idea of louvers to a completely different level, by placing four extremely intricate and fully mechanical sets of them into their Sequential One S100 in an effort to display the time in a way we never saw before in a wristwatch. At Baselworld 2014, we went hands-on with the Sequential Two, the latest and most wearable reinterpretation of MCT’s trademark time-telling device, and saw that it offered a number of much welcomed improvements over its predecessors. The Sequential Two S200 operates on basically the same principle as its predecessors. It comprises a minute hand that does exactly what we would expect it to do: point to the indexes on the periphery of the dial. However, right at the moment when an hour passes the “C” shaped platform (shown on the image above bearing the company’s name) quickly rotates 90 degrees in the counterclockwise direction, hence revealing the next set of louvers, displaying the correct number of the upcoming hour. What we have then is a minute hand that rotates clockwise, as per normal, while the following hour will be displayed on what we would normally call the previous louver.

To give an even more tangible example, on the image above the time is 12:23. As the minute hand reaches 60, the three-quarters arch will snap to the left. Note, that louvers are still showing “9”, and will rotate to “1” as the minute hand advances towards the end of the hour. Altogether there are four sets of louvers in the movement and they carry three figures each. As straight-forward as that sounds, it is just as challenging to realize all this at a level of micro-mechanics where every part operates reliably within in the limited space that a wristwatch offers. It is when so many pieces are to be animated throughout the day that the power reserve of the mainspring turns from an important aspect into a primary source of problems. The friction that is present everywhere where components are set into motion requires a considerably greater amount of power than does the usual going train, give or take some complications.

The efforts of MCT were nonetheless worth it, as throughout the 40 hours of power reserve, the clever louver-system, coupled with the large minute hand, ultimately create a dial that is extremely legible even after a quick glance at the dial. With that said, however, it is difficult to understand why they chose to not have any indexes at the four positions where the screws are set to hold the plate. It makes telling the exact time at those four “corners” rather difficult while carrying little to no aesthetic advantages.