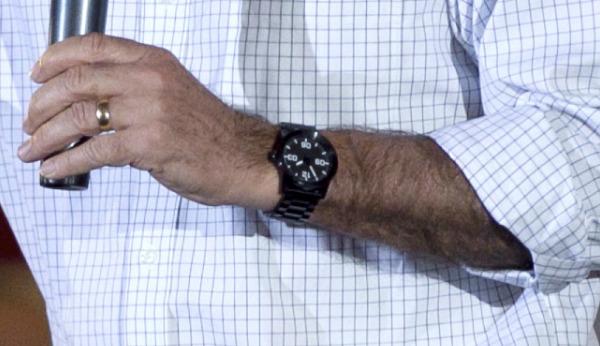 In November of 2012 the United States will hold another presidential election and if you are like me you are wondering, “what watches are the candidates wearing!?” Fortunately I don’t vote based on watch preferences – which would be silly in this country because the watches our candidates wear are actually political signals these days. And by the way, my interest in the watches politicians wear is purely… not political.

President Obama has been wearing the same watches for several years – being the Jorg Gray JG 6500 watch that I reviewed here. Obama is fiercely loyal to the watch having worn it since he was campaigning back in 2008. It was a gift from the secret service, which in turn ended up being a gift for Jorg Gray… from a business perspective. Click on the link above for the full story on what happened with Barack and his Jorg Gray timepiece. It has become Obama’s distinctive watch, and he is seen wearing it most all the time when he is in a suit.

I don’t know when it started but I will once again comment on Bill Clinton’s choice to wear a Timex Triathlon when he was campaigning to be president. Clinton was then and still is today a serious high-end watch collector. Though he chose to wear a very inexpensive and utilitarian timepiece as the US President as a political message that he connects with common people. I always enjoyed that irony since his personal watch collection is extremely valuable. Since then the “everyman watch” practice has become de rigueur for political candidates in the United States. What I also find interesting is that every single politician I have ever paid attention to does in fact wear a watch. Not that I am complaining, but it is certainly part of their “uniform.” A few days ago I realized that I was not aware of the watch that Republican presidential candidate Mitt Romney was wearing and figured I’d investigate purely out of curiosity. Of course “the guys” at WatchUSeek (the world’s biggest watch forum website) had already pegged it doing the hard work for me. I swear, I can always rely on them to discover this stuff before I even get to it. It wasn’t easy though because the brand logo is very difficult to see being black on black on the dial. It took some clever sleuthing to identify the right watch. You can see the entire thread here.

Some investigation found that Mitt Romney was never really much of a watch guy. For the last few years his typical beater watch has been an early generation Seiko Kinetic – an extremely “practical” choice. But it does go along with the mostly sub $400 watches politicians can get away with. You tend to see a lot of analog Japanese stuff from Seiko and Citizen on the wrists of these guys. For the 2012 Presidential election season he started to show up wearing something quite different with a sporty all black watch on his wrist. The watch model is called The Private and it is from San Diego area based Nixon in California. Nixon made it big with trendy fashion watches for skaters and surfers, later entering the zeitgeist of the greater “youth” demographic. Nixon watches are usually rather affordable and not half bad looking if I may say so myself. Given the clothing that most politicians wear, I find it rather unlikely that Mitt shops where Nixon watches are sold. That however is a silly line of questioning to go down because I am almost certain he did not choose the watch for himself. The specific model he is wearing is a Nixon The Private SS reference A276-001 “all black” in a 42mm wide black steel case and matching bracelet. The high contrast black and white dial is militaristic in style as well as youthful. Someone on his team probably feels that on his wrist it conveys a message of “Mitt is a many of action.” The watch is water resistant to 100 meters and contains a Japanese quartz movement. It retails for $200 and can be found for a bit cheaper online. It doesn’t actually have that much Nixon brand DNA, and all in all is incredibly difficult to identify if you don’t know what you are looking for. I have a feeling that the piece’s youthful aura, price, American brand name, and almost nameless dial are what made it a good choice in the buyer’s opinion for Romney as a timepiece that satisfies the “American politician watch rule.”

What is interesting is that the same rules don’t necessarily apply in other countries. In much of Europe, politicians are supposed to be tasteful and a bit successful. They are supposed to carry themselves in a way that conveys personal as well as nationalistic pride. They are held by much the same standards are European business people when it comes to attire and wrist wear – which is often “nice, but not flamboyant.”

UPDATE: So Nixon reached out to us with some new information that might be interesting regarding the story of Mitt Romney wearing/buying The Private watch.

“Some info to add to the story; although one would surmise that Romney would not buy Nixon for himself, the story goes that he did, in fact, purchase the watch himself. Romney owns a home in La Jolla, CA (a beach and surfing community) and we were told that he bought the watch at Mitch’s. Mitch’s is a surf shop in La Jolla. It’s a small but highly popular shop and an essential retailer for the area. Mitch’s has been in business since the 60’s. We were told that Romney himself was in the shop and bough the watch; as it’s located nearby to his home.”