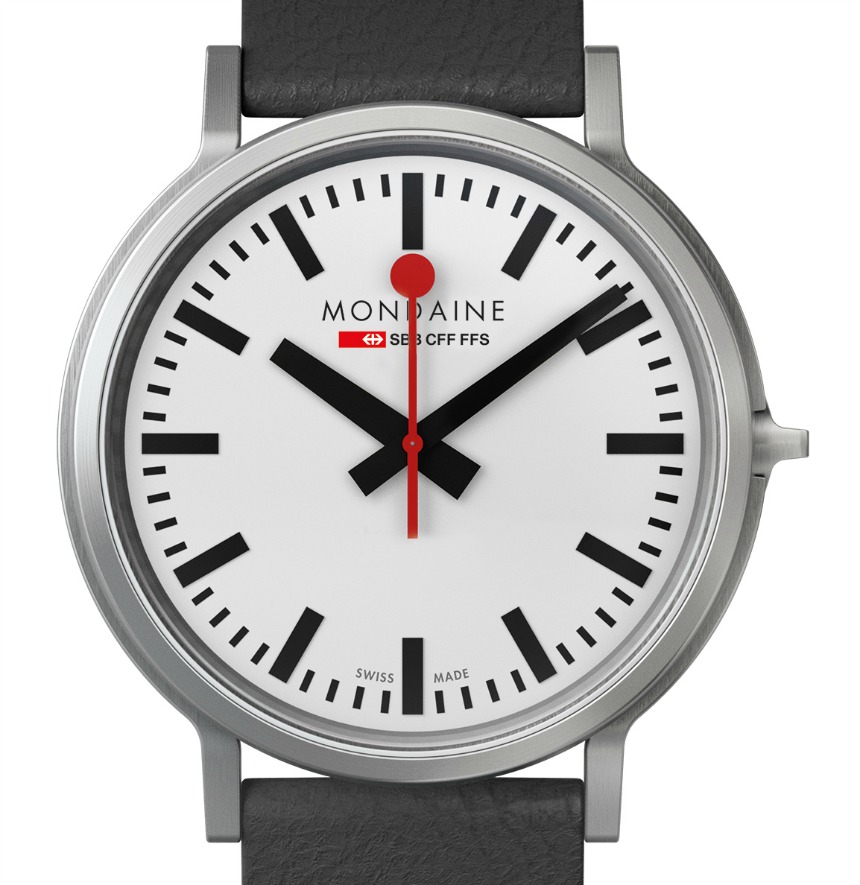 I was probably standing at a train station in Switzerland for a half dozen times before I first realized a peculiar thing about the clocks. The design of the clocks has been memorialized in Mondaine watches, and later in Apple devices, as they’ve “borrowed” the design in some versions of iOS. On a white background, the incredibly legible clocks have black hand hour and minute indicators along with a red seconds hand tipped with a large circle. The strange part is that when the seconds hand reaches “O,” it just stops for a full two seconds, and then jumps ahead to keep telling the time.

This doesn’t mean the clocks run slow. The seconds hand quickly moves to catch up with correct time. So the logical question is why? According to Mondaine, the Swiss SBB Railwaya clocks have been doing this for about 70 years. The story starts with a Swiss desire for accuracy – naturally. In the 1940s Switzerland wanted the clocks in each of their train stations to be synchronized. If you are a train historian then you know the pivotal role that the railroad industry had in precision timepieces. Trains not only needed to be on time, but train stations each needed to know the same time. During the era of mechanical timekeeping, this was a very manual process that required regular synchronization. In 1944 a Swiss engineer named Hans Hilfiker designed a new system that would synchronize clocks at each station using signals that traveled via telephone cables. The system would re-sync the clock at several thousand stations every single minute. We believe the two second pause allows for each clock to be synchronized and the delay gives the clock the ability to neutralize any perceived error. Thus, the iconic two second pause each minute as seen on Swiss Railways clocks was borne. It is a unique and telling aspect of Swiss culture, and very much in line with the personality of their watch industry today. In the mid 1980s watch brand Mondaine licensed the right to use the iconic clock face designs in wristwatches. In 2013 Mondaine finally captures the two second delay in a new watch called the Stop2Go. In many ways this is very much the same Mondaine Swiss Railways watch that people have become accustomed to and enjoy around the world. I personally have a few of these watches, and feel that they are both affordable, legible, and attractive. The Stop2Go doesn’t just have a special quartz movement with the two second delay, but it also features a slightly redesigned case. Oh, and if you like the new case but aren’t too keen on the Stop2Go complication, Mondaine is likely to offer other versions in this same case in the future.

For me this is the best part of the Stop2Go timepieces. The movement is interesting, but the new case design is very nice. In steel, the brushed case is 41mm wide and features a more modern, industrial design compared to the typical Mondaine look that people tend to think of. A unique feature is the crown, which is designed to look like a rocker switch. Hopefully it isn’t too difficult to pull out, but it does look good. This is probably my favorite new Mondaine watch in quite some time. Inside the watch is a caliber 58-02 Swiss quartz movement, which is actually more complicated than you may expect. Mondaine needed to use two separate motors to make the watch work properly. That means the hour and minute hands operate on a different gear train than the seconds hands. In a sense the movement is almost like two movements in one. This actually drains a lot more power, so the watch needs a lithium ion battery. With it the battery life is more than three years.

Other benefits include uses of an AR coated sapphire crystal, but the case water resistance is rather limited at just 30 meters. Attached to the case is a black leather strap with a sort of distressed texture. If you aren’t typically interested in quartz watches this is one of the few exceptions we would recommend to those who normally want only mechanical watches. It is a cool concept and clever interpretation of the real world SBB Railways clocks. Retail price for the Mondaine Stop2Go ref. A512.30358.16SBB is $675 and they are available now. mondaine.com