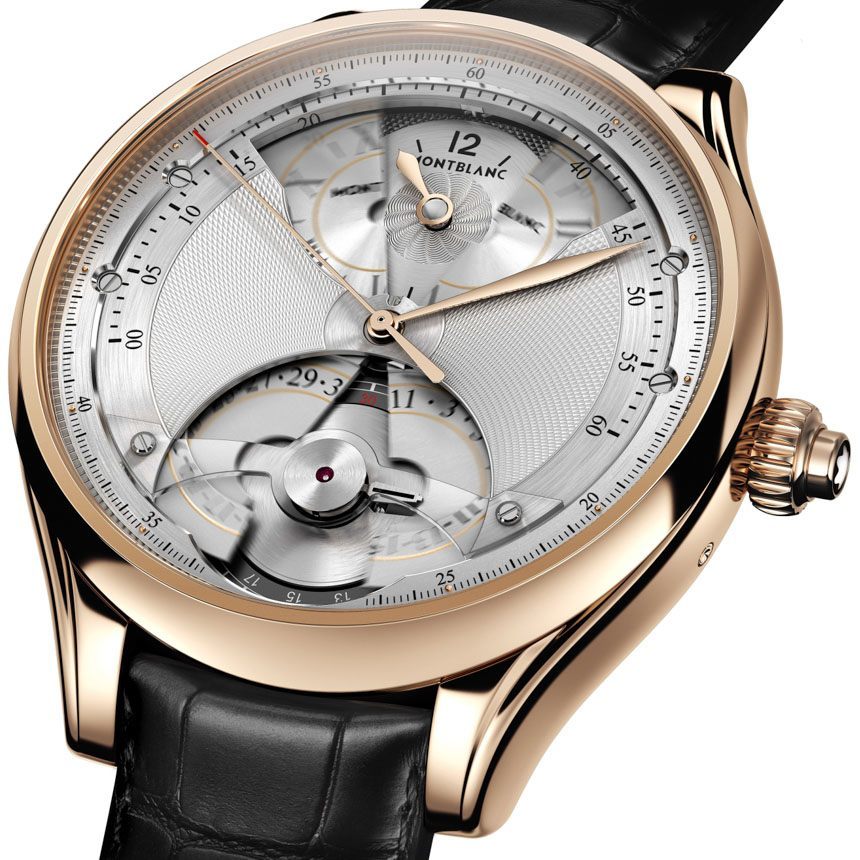 In consideration of those who may not be familiar with the original Montblanc Metamorphosis, and hence, the concept behind this wild model, allow us to add a brief introduction. The Metamorphosis, as its name suggests, is all about a transforming watch that undergoes massive changes upon the request of its owner. More specifically, Montblanc – and their high-end watchmaking workshop called Minerva, in Villeret, Switzerland – created a watch that is capable of changing its two subdials based on the desired functionality of the piece, which varies between “normal” timekeeping and a chronograph. What you see above is the lower subdial (well, subdials, I should say) set into motion, after the actuating lever on the left side of the case has been pulled. The way this system works should be rather similar to how a minute repeater functions: as you may well be aware, a minute repeater begins its chime once a small lever on the side of the case has been pulled. The reason the lever is necessary, in the cases of both the minute repeater and the Montblanc Metamorphosis, is that both of these highly complicated mechanical movements require a lot of energy to work – in fact, the transforming complication comprises a mind-boggling 494 components alone! Therefore, as the lever is moved, it winds an auxiliary mainspring, which in turn, supplies power exclusively to the main complication of the watch. Once the lever had been actuated, the pirouette of the subdials commences. The Montblanc Metamorphosis II offers the same functions as its predecessor: in normal state (which is what you can see pictured above), the watch indicates the hours on a dedicated subdial at the 12 o’clock position, minutes are displayed on a retrograde scale by a centrally mounted hand (along with a seconds hand that runs full-circle, as one would expect), while the date is displayed on a subdial at the 6 o’clock position. Over the latter subdial, is a sapphire bridge, which keeps the date’s hand firmly in place, without obscuring the view on the gold subdials. Seen above, is the other state of the dial, all set to serve the secondary function of the watch: the monopusher chronograph. Once the swift, 5-seconds process of transformation is over, the Montblanc Metamorphosis II shows a greatly different face: a sportier, more modern design that is meant to go with the perceived sporty nature of the chronograph. Roman numerals on the hours sub-dial are swapped for Arabic ones, while the one at six o’clock is new as well: the date dial has been replaced with a 30-minute counter for the elapsed minutes of the chronograph. Furthermore, the areas surrounding the two sub-dials are now in dark grey, making for a more easily recognizable aesthetic. The chronograph can be started, stopped, and reset via the single pusher set into the crown of the watch. It relies on a more sophisticated column-wheel setup – in line with what one would expect from such a highly acclaimed chronograph-manufacturer as Minerva – and it uses a more traditional horizontal clutch for the starting and stopping of the mechanism. Classic watchmaking treats don’t just stop there, however: the movement runs at the rather ancient rate of 2.5 Hz (18,000 vibrations per hour), and the balance wheel features tiny screws individually set and adjusted in its periphery, for perfect balance and isochronism. This unique hand-wound movement unquestionably is a hybrid of traditional and modern watchmaking. A more subtle, albeit important, improvement seen in the second generation Montblanc Metamorphosis, is that the case is now perfectly round, as opposed to the teardrop shape of the first version, where the lower half of the case extended considerably at the 6 o’clock position. That, today, is gone, and the Montblanc Metamorphosis II comes in a 52 millimeter wide and 15.8 mm thick watch – a very large watch indeed, despite the rather slim bezels and the relatively short, flared lugs.

Despite its substantial size, what the Montblanc Metamorphosis achieves is truly amazing: it brought the fascinating (and seemingly impossible) idea of transforming mechanics to the level of wristwatches, where space, and hence, the supply of much required power, is extremely limited. To say that the Montblanc Metamorphosis II is a niche product, would be a massive understatement – but Montblanc knows that, and they are making only 18 pieces in 18k red gold, with the price being €270,000, or about $342,000. montblanc.com