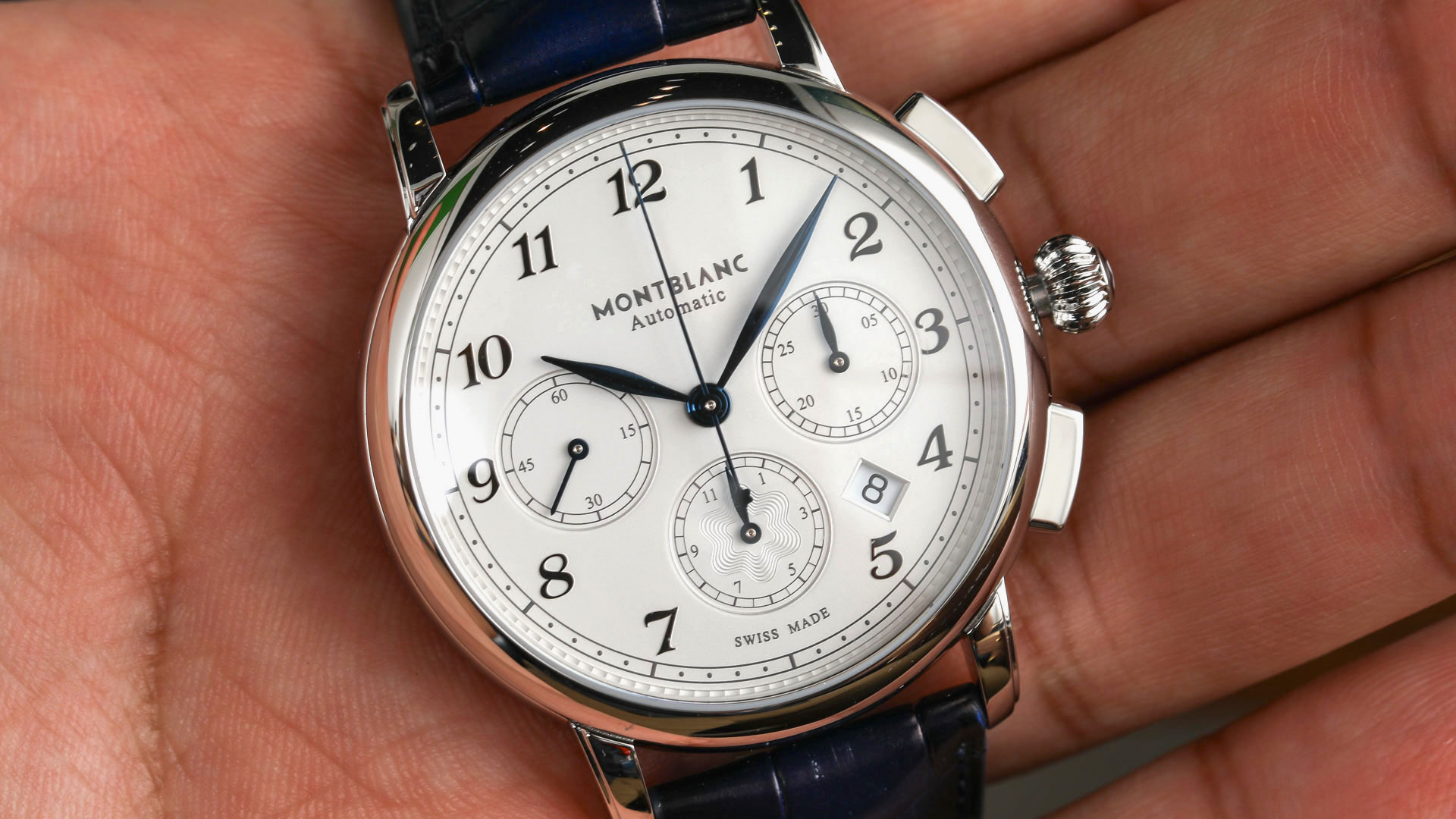 To celebrate the 20th Anniversary of the Star Legacy Collection, Montblanc released two new chronographs earlier this year. As a precursor to SIHH 2018, the Montblanc Star Legacy Automatic Chronograph and the Montblanc Star Legacy Nicolas Rieussec Chronograph proved to be nice additions to the collection and formidable 20th Anniversary releases, even though they reside in wildly different price brackets. Today, we are going hands-on with the former: a reasonably affordable, classic, “Montblanc-ian” chronograph with a lot of charm.

It’s been interesting watching Montblanc progress from a luxury men’s accessory company into a more notable name in the watch industry – although in more recent years we have seen a few highs and lows from the brand, the effects of parent company Richemont’s acquisition of historical movement maker Minerva and a greater focus on the brand’s watchmaking division remain appreciable. Some would argue that it’s harder to break the mold of “fashion brand” in the eyes of enthusiasts when one isn’t exclusively selling watches, but Montblanc has done that rather successfully – and I attribute that to how well they are able to fit watches into the brand’s overall product DNA. It’s a mixture of sporty and dressy, competitively priced, with an interesting quirk here and there. I mention this brief opinion because I feel the Star Legacy Automatic Chronograph is a quintessential example of all that. The stainless steel case measures in at a moderate 42mm x 14.23mm and features a sapphire crystal. I feel that the rounded “pebble-esque” case shape will help the watch slide under a cuff easily enough. Although that 14+ millimeter thickness in a 42mm-wide watch, as well as your typical 3-6-9-4:30 dial layout will make it obvious to any seasoned watch enthusiast that we are working with a Valjoux-based caliber inside. That often means a noisy rotor, short power reserve, and always means a thick case. Thankfully, it also entails a relatively competitive price to try and put all that right. When paired with the polished finishing over the entire case and lugs, easy-to-adjust onion crown (with that cool Montblanc logo), and extended chronograph pushers, the watch offers a mixture of modern as well as classical chronograph design elements – it looks and feels dressed up, despite being a chronograph. Nevertheless, it isn’t hard for me to envision the Star Legacy Automatic Chronograph in a less formal environment – getting this sort of versatility right is what we have come to expect and love from Montblanc. The dial, according to Montblanc, was inspired by some Minerva pocket watches of old, and a quick Google search shows that they nailed it. Montblanc re-worked the applied Arabic numerals this time around which, set against the silver-white dial, means contrast and legibility couldn’t be better. Well, maybe the numerals could be just a tad larger for some added character. The monochromatic color scheme makes even the sub-registers all easy to read at a glance. The only splash of color on the dial comes from the blued leaf hands, which, thanks to their length and substantial width, stand out beautifully and don’t get lost in the overall design. I could do without the 4:30 date window, though I don’t think it’s as bad as it’s been made out to be.

What I appreciate most about the dial, is the subtlety that brings touches of perceived luxury and attention to detail that’s rarely seen in a watch at this price point. Let’s start with my favorite – the 6 o’ clock sub-register. In lieu of cutting off the 6 o’ clock index, they’ve left it off entirely and instead have included “Swiss Made” in its stead. I’m often distracted by partial indices (looking at you 9 o’ clock) so I appreciate omitting it altogether instead of the alternative of trying to make it fit or cutting it off. Additionally, within the index itself, keeping in line with the rest of the Star Legacy Collection is a subtle but clever guilloche Montblanc logo that adds a charming element without being ostentatious or gaudy – something Montblanc hasn’t always been good about in the past. Another subtlety that’s asking for a lot of attention, and another one of my favorite parts of the watch is the chapter ring, which features two unusual, but classically cool elements. First, the minute track outside of the hour markers features a dotted “railway” pattern instead of lines – reasonably rare for a chronograph and a “dressy” touch. I can’t help but be reminded of Breguet and the many watches they produce using dots instead of lines to mark the minutes. The second is around the perimeter of the dial, that features a unique filet saute guilloche that I feel isn’t nearly as capitalized on in the press images, and needs to be seen in the flesh to appreciate. For over $4,000, I’d love to see a reasonably more extensive use of such neat “horological jewelry” – adding this guilloche to the periphery of the sub-dials at a smaller scale would have really set this watch apart. Inside the Montblanc Star Legacy Chronograph is the MB 25.02. The movement is based on a Valjoux 7753 and is visible through the sapphire caseback. The rotor is decorated with some Geneva striping, blue screws, and 27 jewels – though the plates below remain rather bare and basic. The watch operates with basic Valjoux specs at 4Hz, features 46 hours of power reserve, while the case has a water resistance rating of 30m. Personally, considering this watch is sub-$5,000, I find the movement a decent value considering many un-decorated off the shelf movements costing considerably more in this space. Tying the watch together is a “Sfumato” blue Alligator strap. Sfumato is a technique involving layering paint on the leather to provide an almost sunburst-like effect. This is done by Montblanc Pelleteria (Montblanc’s leather atelier) in their Florence manufacture. To be honest, when I first saw the press images, I didn’t think I would like the strap, but it photographs extremely well and compliments the watch nicely. It’s soft, well made, and provides a nice contrast to the overall design. The bright center and darker edges are bolder than the rest of the watch, but aren’t distracting, and succeeds in giving the watch a more avant-garde look. To have one’s own leather atelier is a nice touch and certainly a strongpoint Montblanc should capitalize on much more frequently and openly. I believe that Montblanc has long been a brand that knows how to create a proper marriage of luxury goods. Until recently, I would have argued that Montblanc specializes mostly in leather goods and writing instruments who’ve long paired their everyday watches, sometimes successfully, sometimes not, with other “looks” featuring a union of different goods. That is to say that Montblanc has long been a brand for people who are attracted to the perceived lifestyle Montblanc is selling as a whole – whether that be the enthused adventurer, the urban dwelling artist, or the classic Manhattan businessman. The Montblanc Star Legacy Chronograph joins the ever-growing list of watches coming out of the brand lately that fit into the brand’s traditional collections, while still standing on its own in the industry. It’s simply a nice-looking watch, that wears well, and isn’t astronomically priced. It encompasses a lot of what Montblanc is good at, and produces a lovely timepiece that will appeal even to those who wouldn’t necessarily be interested in the Montblanc lifestyle – and I hope to see this trend continue in Montblanc’s future.

Price for the Montblanc Star Legacy is a modest $4,300. montblanc.com