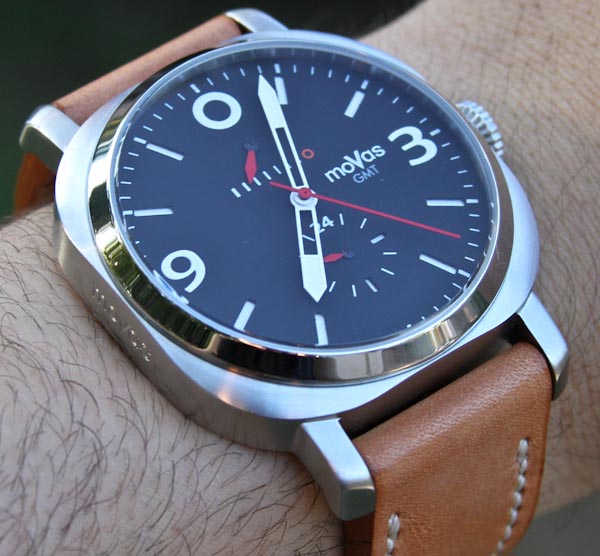 MoVas is a unique brand for a couple of reasons. In a sense it is a sandbox for Singapore based designer Sean Wai. Not just a watch designer, Sean is a watch fan and enjoys designing timepieces. He isn’t half bad either, and the look of MoVas watches are highly unexpected for an Asian brand (sorry if that sounds bad to anyone, but it is true in many instances) – which are often derivatives of European styles. There is a lightness and modernity to the design that makes it feel anything but something that is “living in the past.” This is his first watch, simply called the GMT.

MoVas stands for “movements of Asia.” Currently, all MoVas watches use Chinese movements. there is a very specific reason for this. Sean has no interest in making simple three-handed watches. He likes complications and prefers the less cost intensive route of Chinese movements to experiment with his designs. The movement in this watch has a subsidiary GMT hand, power reserve indicator, and the time. Using a Swiss movement with these complications would raise the price of the watch more than substantially. Thus, to play around with designs and offers a good value, MoVas uses Chinese movements that are less than boring. The movement here is made by Seagull – probably the most famous mechanical watch movement maker in China. They have some decent stuff, and in here is the ST2858 automatic movement. The movement is machine decorated and viewable through the watch’s caseback window. While you can get a lot for your money with Chinese movements, they come with draw backs. There is a reason that Japanese and European movements are held in higher regard. Chinese movements are often more… primitive that movements you are used to. Having a watch with a movement from China takes some re-education in some instances. Swiss movements for example are easier to live with. Meaning that you don’t often need to worry about breaking them just by operating them. They have winding limiters that make it impossible to overwind them. Not exactly true with many Chinese movements.  If you overwind them too much, they can break. A novice without an education in this can easily break a watch with just a few turns of the wrist. But if you know how to operate a movement – you should be safe. Unlike many other Chinese GMT movements, the one here has a pusher on the side of the case that moves the GMT hand in one hour increments – this is good. Plus, watches with GMT subdials are really rare. This one looks great, but unfortunately doesn’t have markers for each of the 24 hour periods. So it is hard to read with precision. The rest of the dial is nicely made, and quality is good. Like watches such as a Panerai, there are cut out sections that are recessed a bit and filled with lume. This adds some depth to the dial. The hands are easy to see, and the placement of a “0” at the 12 o’clock indicator is cool. The linear power reserve scale has a clean straight forward look to it, and the touch of red on the dial is welcome. I think you’ll agree that MoVas is good at design. The case is also interesting. Which the dial is round with sloped, polished bezel, the case is a square with rounded edges. It is 45mm wide in steel. The crystal is mineral glass with AR coating on the inside. Apparently there are a few special (more expensive) Versions of the GMT watch with sapphire crystals. Water resistance is 100 meters, and it has a aviator style crown. While the watch is large and more or less flat, it looks neat on the wrist and is comfy with its thick leather strap. MoVas throws in two straps. The brown one you see here as well as a black leather strap. Price for the MoVas GMT is $380. Really a nice price for a watch with a design like this. I like the designs of most all their pieces, and if you learn how to take care of the movement, this isn’t a bad addition to the collection.

Thanks for MoVas for the review unit. Opinions are 100% independent.