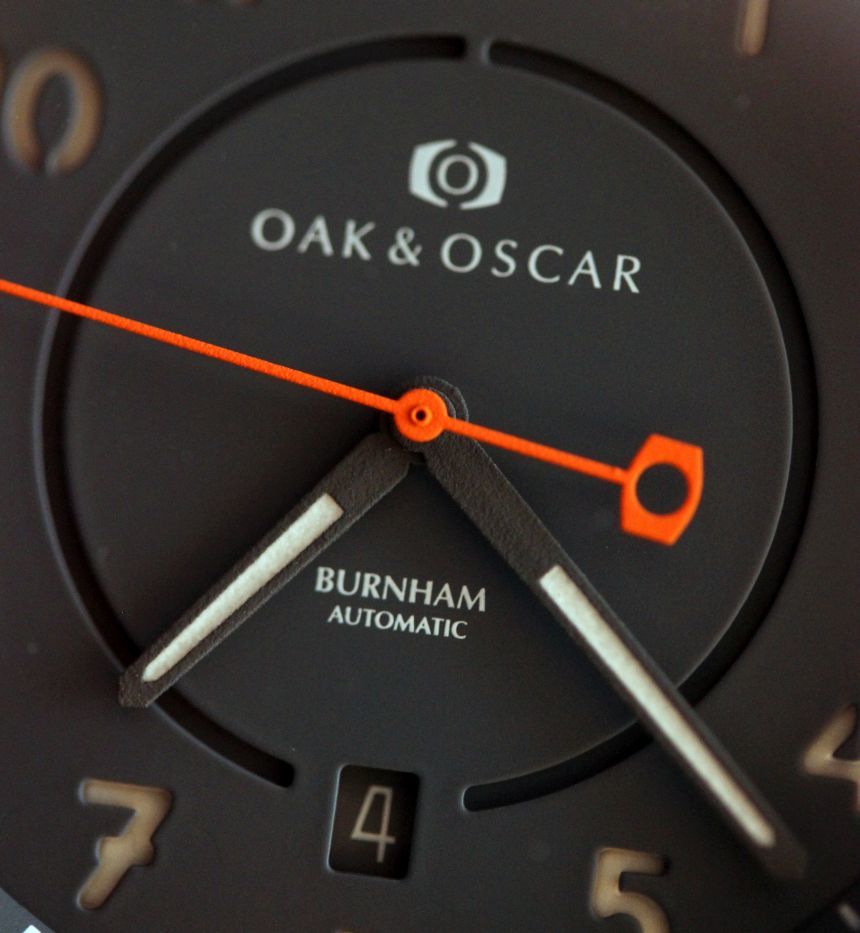 Being a former Detroit-area resident who now calls Chicagoland home, it has been an interesting time when it comes to watches. Both my former and adopted hometowns have had brands cropping up (Shinola, Detroit Watch Co, Smith & Bradley, and Astor + Banks), and they have been watches that appealed not just to me (and residents of those areas), but also to people all over the world. Ensuring that Chicago is not outshined by Detroit, we have a new brand that is on the scene – Oak & Oscar.

If you are familiar with any of the Redbar activities (of which Chicago Commonwealth Crew is a part), then that brand is familiar, as it was started up by one of the Chicago chapter founders, Chase Fancher. We’ll talk a bit about Fancher, what drove him in the creation of this watch, and then, of course, give you our hands on impressions from our time spent with one of the prototypes of the Oak & Oscar Burnham. When it comes to the founder, you need to understand that Fancher is most definitely a “watch guy.” Yeah, he’s likable and a great guy to grab a drink with, but that is really only of note to those of us who can actually meet up with the guy. For everyone else, you want to understand what drives the guy at the helm (and who also happens to have designed the watch). From our first meetings, I could tell this guy was someone who knew his stuff. He talked intelligently about watches (and not just those he owned), and had been traveling to BaselWorld even before the Oak & Oscar Burnham existed in any form. As to his “watch guy” cred, aside from, you know, his watch brand and founding Commonwealth, he’s the sort of guy who notices watches in the world around him. As a point of reference, in our last meetup over coffee, he was stopped in conversation because he thought he glanced a fairly rare watch on someone’s wrist (in this case, a Sarpaneva), but it turned out to be a false positive. Regardless, that is something that resonates for me, and I imagine others as well – being drawn to checking out random watches out there in public, because there might be something rare we run across. I paint that story as a background to explain this next point. When we were talking about the Oak & Oscar Burnham, I asked why he made some of the choices he did, and Fancher’s response was that he wanted to create a watch that he, as a watch guy, would actually want to wear. Even aside from the design, this means that the quality of the components going into the Oak & Oscar Burnham are top notch. You start with obvious things like the movement (a Soprod A10 with a custom rotor, in this case), and go from there to the details. Like the Horween leather strap made by Woodnsteel (out of Indiana), complete with a buckle that has a relief on the backside so it sits more flush with the strap. Or how about the watch wallet that comes with the Oak & Oscar Burnham, made of that same Horween leather by Chicago-based Defy, and lined with German wool felt. Why the wool? As it turns out, that is the material used to protect expensive (and delicate) equipment in shipment. Aside from absorbing shock and water, it also is an abrasive-free surface. Which means the 4-spot watch wallet also becomes an excellent work surface to change straps out on your watches. While it is difficult to condense a series of conversations down, I think that manages to provide a sort of Cliff’s Notes for the passion that was behind the creation of the Oak & Oscar Burnham. With that set in mind, let us move on to talking about what it is like to have the watch in hand (and on wrist). One of the first things that caught my eye was the color palette. Grey dials are not something you see all that often, especially paired with orange and brown. When I asked Fancher about that, it was a simple answer – those are the colors that he finds most in his own personal style, so it was easy to go with that. You cannot fault logic like that – if you are designing a watch, especially your first time out, it should be something that appeals to your tastes. Fortunately for Fancher, those tastes also appeal to a lot of other people. The next thing I noticed about the Oak & Oscar Burnham was its size. In the photos I had seen previously, I had a mental image built up that made for a bigger watch. Yes, it is a 42mm watch, but it feels smaller than that seeing it in person. I think this is in large part due to the fact that the bezel on the stainless steel case is pretty minimal, meaning you see mostly dial. Then, paired as it is to a 22mm strap, you just have proportions that give it a more compact feel while retaining a good presence on the wrist. Oh, speaking of that strap, that is something that is still being fine tuned (which underscores Fancher’s attention to detail). In the tour he did around the various Red Bar groups, he noticed that a lot of people were ending up at the smallest notch on the strap – so they’re adding another one to it, which should help for smaller wrists. There is also a good chance the tail of the strap may be docked, which should prevent you seeing that angular end sticking up above the keeper. Frankly, attention to detail shows up throughout the Oak & Oscar Burnham. For instance, the counter balance on the seconds hand actually aligns with the logo printed on the dial (a nice touch). Flip the watch over, and you see that the placement of the stars on the rotor (taken from the Chicago flag) is such that you can see the jewels in the movement through them. Back on the front of the dial, that attention extends even to the numerals used on the sandwich dial. For starters, the 7 has the slash across it, which is something I have never seen before (that same 7 appears on the color-matched date wheel as well). Now, take a look at the 8. Again, this is unlike anything I have seen on a sandwich dial and, per Fancher, went through many, many revisions until they came up with the final idea. That last idea got sent over to Lum-Tec as the deadline for the prototypes was approaching to see if it could be done, and now here we are. The other cutout on the dial, which basically marks out the hours track, was something I asked about as well. It was added to provide some additional depth to the dial. Since it is not lume-filled, it’s providing some shadowing on the dial, as well as ensuring that there was not just a flat expanse. While I was unsure about this detail at first, I have really come to like it.

I also really appreciate the fact that the handset was done in a way that they all reach to their respective tracks, with the second hand actually hovering slightly over the chapter ring. Also a nice surprise was how readable the watch was, specifically those hands. Given that they are finished in grey as well, there was the distinct possibility of losing them in the dial, and having to rely solely on the lume strips. That, thankfully, was not the case for me, and I had zero problems being able to read the time at a glance. There was one detail that did feel a little off on the Oak & Oscar Burnham, and it is that aforementioned chapter ring. With the dial, you have some great dimensionality there, and of course the luminous paint. When you come to the chapter ring, things are just flat, and none of the printing itself is luminous. Not that the chapter ring is itself bad, which it certainly is not. It provides utility for the watch, and of course provides the transition from the dial to the case. When I asked Fancher about it, he said that he had considered cutouts at the compass points, but felt it seemed over-designed. Additionally, LumTec said to accomplish that, the chapter ring would have had to be plastic rather than metal, and Fancher felt the plastic had no place on the dial of a watch at this price point, so it was scrapped. As to the lume, that turns out to be a simple matter of gravity. Basically, unless the lume can dry flat, it ends up looking pretty bad – so, the lume went by the wayside as well. For my splitting of hairs here, I do like the fact that the chapter ring gives you an angle from the case to the dial, rather than being a right-angle sort of affair, as it seems more thoughtfully put together. Something like the chapter ring might seem nit-picky, and, well, it is. The Oak & Oscar Burnham is such a well-done and well-sorted watch, you can get down into the details of what has been created. When you do that, you realize that most of them are just plain spot-on (oh, and there is one more surprise hiding in the watch for future owners, but no spoilers from me!), and that is when you notice if anything feels off – and for me, it was just the one item, the chapter ring. When you get back up out of the weeds, and get the 84g watch strapped on for the day, all of those details blend together to create a cohesive watch that looks and feels good on the wrist, and is ready to head with you into anything short of a black tie affair. I wore the watch to the office, around the house, and even with a suit a time or two, and it just plain worked. The Oak & Oscar Burnham is a great everyday sort of watch. While the steel case is compact, it still feels robust, and the grey of the dial means that it’s a bit of a chameleon, so you could end up putting just about any strap on you want (though the included Horween leather is a great one), including the nylon strap it comes with. It is safe to say that the Oak & Oscar Burnham is a watch I liked, and am glad I got to spend time with it. You can pre-order your own at a price of $1,450; after the pre-order period closes, the full retail will be $1,650, with delivery expected in early fall. Combine the well-sorted design, quality materials, the wool-and-leather wallet, and the fact the watch is a serialized 300-piece edition, the pricing feels very much appropriate for what you are getting – especially at that pre-order discount. Here’s to hoping that this is the start of a long run of watches from the brand that exhibit the same level of commitment, quality, and passion. oakandoscar.com

>Brand: Oak & Oscar
>Model: Burnham
>Price: $1,650
>Would reviewer personally wear it: Without a doubt.
>Friend we’d recommend it to first: This is a solid choice for the person who wants “just” a three-hander with the attention to detail that we normally see reserved for much higher-end watches.
>Best characteristic of watch: All the tiny details that you can find. If I were to pick one, it would be the different numeral shapes used on the dial and date wheel.
>Worst characteristic of watch: It’s going way down in the weeds, but the flatness of the chapter ring was what got stuck in my teeth.