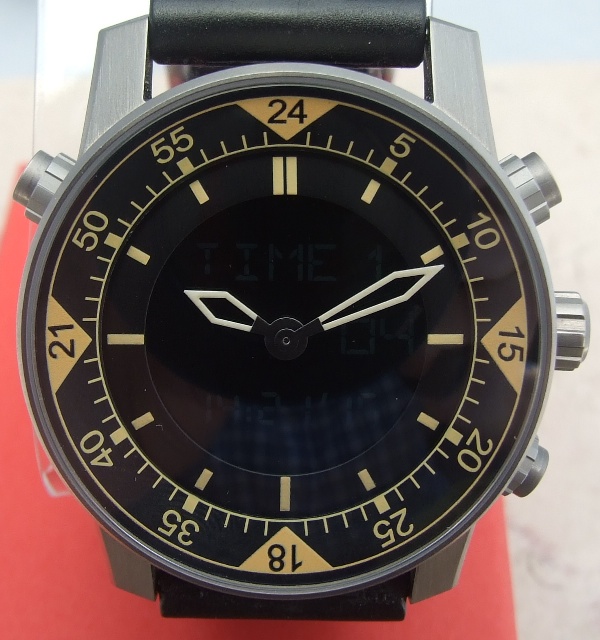 New analog-digital watches are few and far between, so when we heard that Ocean7 had one we contacted them for a review. It’s called the LM2-AD and I think you’re going to like it. Well, some will – analog-digital is definitely not to everyone’s taste.

The LM2-AD uses the same case as the LM2 predecessor, which was an internal-bezel diver with an ETA 2824. The Fricker-style case is titanium, coming in at a mere 67g for the watch itself despite its 44mm by 15.8mm size. At 52.6mm lug-to-lug, this is a modern sports-watch size, with a spectacularly clear domed sapphire crystal that spans 42.4mm all by itself. The double dome and inner anti-reflective coating combine for some of the best off-axis visibility I’ve ever seen on a watch: That’s unusual for its clarity and lack of distortion. The analog dial is much to my liking, very uncluttered and a snap to read. Underneath the analog hands is a reverse LCD display for the ISA 9011 movement. Since the LCD is reversed (light on dark) the digital nature of the watch is almost invisible to others unless you point it out. There’s less contrast on the LCD, so the downside is that its harder to read. It’s super difficult to capture in a picture, so my apologies. In person it’s quite readable. The upper left button is the backlight, which is wonderful and also causes the hands to move to 10:11 for unimpeded reading: So the ISA movement gives you two time zones, the second of which is digital-only, a stopwatch and alarm. Nothing exotic here, though I’d love it if they added a countdown timer. The analog portion is synchronized to the digital, and there are separate bidirectional motors for each hand, so when the hands move out of the way it only takes 2-3 seconds. Quite fun to watch.

Nighttime legibility is excellent, as the hands and dial have excellent lume applied without being too busy: I’ve yet to need the backlight at night, actually. Note the unusual numbering on the inner bezel – the reverse triangles have 24-hour numbering, but the other numbers are minutes: There are a couple of things I’ve seen on Swiss analog-digital movements that puzzle me. One is the crown and how it’s used: Here, as with the Omega X-33, the rotation of the (non-screwdown) crown does nothing; it’s a button that is also pulled for setting. It just looks like a conventional crown. The second is the lack of a second hand. The ETA E20.321 does the same thing and I don’t know why. Less busy dial perhaps? Some Casios do this too, to be fair.

The LM2-AD comes with a ridged rubber strap and stainless steel buckle. While the watch is rated to 100m, the strap encourages you to not worry about getting it wet. An option when ordering is a replacement buckle made of matching titanium. Buckle options: steel on left and titanium on right

I like the titanium more. The weight and finish are immaterial, but the Ti version is thinner and thus more comfortable when resting on a desk. Here’s the steel buckle on the wrist, protruding just a bit. With 24mm lugs, there are lots of strap options due to the Panerai influence. I’d been meaning to check out the new segmented-plastic bracelets made popular by the JLC Navy Seals, so I bought one from Panatime to try here. At a super-light 33g for the bracelet, it’s an excellent complement to a titanium watch: On all of the options, the watch feels almost weightless. The light weight and 44mm equals low density, and the lower specific heat capacity of titanium is really nice in hot spells like we’ve all had this summer. The height is noticeable. Despite that, the angled lugs and beveled bezel keep it very wearable. It’s 13.8mm high at the bezel, and tops out at 15.8mm at the center. Other small notes from wearing it: The stopwatch measures 0.01 second fractions until one hour, after which it switches to 1 second increments. If you enable 12h mode, then the display of ‘AM’ or ‘PM’ replaces the seconds readout and you have no way to see seconds. There’s also no way to display the month or day, which I miss at times. The alarm is of average quartz volume, and with normal usage the battery life is rated for just under four years.

The watch is also available in sandblasted-finish black DLC for an additional $50, which would give it a seriously stealthy look. I like plain titanium myself, but DLC should have excellent durability if you like black.

I’ve a special fondness for analog-digital watches, and this one is excellent. At $549, it has competition from Casio and Seiko, but it’s a heck of lot less than an MR-G and way way under Swiss models like the Chopard or new Omega Z-33. It’s not cheap, but it is an excellent value. I’ve bought this one myself, and have worn it non-stop for several weeks now. Just a lot of fun to wear, and light enough to double as an exercise watch. There aren’t many 44mm watches I can wear during a volleyball match, but on the rubber strap this one is just fine.