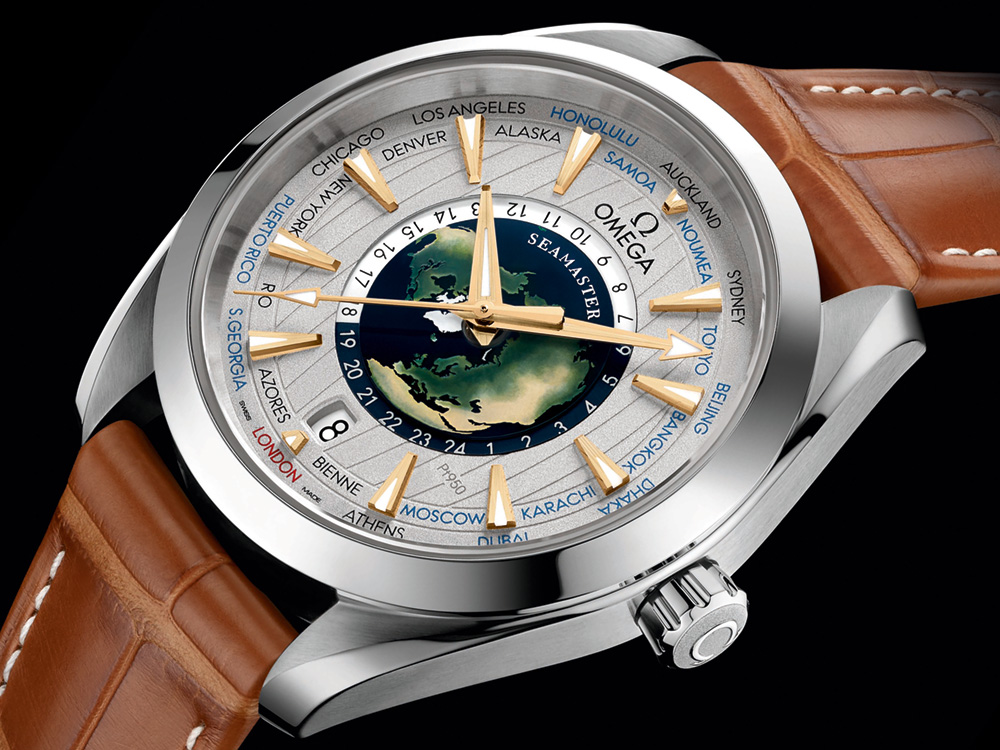 Starting with the dial, Omega has combined high-end materials like platinum, 18k gold, and of course the elegant hand-enameled world map to produce something striking. The dial’s outermost portion is produced from “sand-blasted platinum-gold” and is printed with 24 world cities. Color choice for the world destinations is coded, with red representing GMT, black to mean these locations are plus one hour in the summer, and blue to demonstrate locales which do not observe daylight savings. Inside the outer ring of world destinations, there are 18k yellow gold applied hour markers filled with Super-LumiNova. The inner dial is sapphire crystal with an enameled map of the Northern Hemisphere as seen from the North Pole. Surrounding the world map is a 24-hour register which is also color-coded black and white for day and night. Note that the time zone often represented on worldtimer watches by Paris or Geneva is here represented as Bienne, Switzerland, where Omega is based. Worldtimer dials can be a cluttered mess, and while the Aqua Terra Master Chronometer has a lot going on, the wealth of information is carefully organized and spread out over enough dial real estate to make the functions actually useful and easy to read. The contrast provided by the gold hands and indices also makes the main time very legible. Upsizing the case to 43mm from the 41mm width of most men’s Omega Seamaster Aqua Terra helped create dial space for all that information but also called for more of that sweet, sweet platinum. The Omega Seamaster Aqua Terra Worldtimer Master Chronometer’s case is stylistically much the same as its other Aqua Terra relatives with turned lugs, a symmetrical design, and a conical crown, but the larger size and use of platinum elevates the piece overall in both presence and, of course, cost. This being still an Aqua Terra, which is at its core a water-capable sport watch, the Omega Seamaster Aqua Terra Worldtimer Master Chronometer also has a very respectable 150m of water resistance. While not a professional dive watch number, this should be more than enough for the occasional spilled gin and tonic which can occur whilst pushing millions of dollars worth of chips across the table at your favorite Macau casino, as one might do wearing this watch. At the rear of the platinum case is an obligatory exhibition caseback, allowing visual access to the caliber 8939 within. With the Omega Seamaster Aqua Terra Worldtimer Master Chronometer Limited Edition (whew) being Omega’s first worldtimer watch, the caliber 8939 is of course purpose-built and is a visual treat with a fully decorated baseplate, rotor, and balance wheel bridge. But we can’t overlook that this caliber is certified as a Master Chronometer from METAS (learn more about the standards here), the Swiss Federal Institute of Metrology. This means the movement is not only highly accurate, but also meets rigorous standards for robustness and magnetic resistance. Magnetic resistance is also much enhanced by the platinum case and red gold movement components like the rotor and balance bridge. In fact, the Caliber 8939 has recorded a magnetic resistance of over 15,000 gauss which Omega claims is the highest in the industry. Along with this piece, most of the new-for-2017 Aqua Terra series also have METAS-certified movements and this is good evidence of Omega’s intended direction with the Aqua Terra collection. As you’d expect, the Caliber 8939 also utilizes Omega’s much loved co-axial escapement, as both the caseback and the rotor indicate. The price of $48,600 and limited availability of 87 pieces will keep the Omega Seamaster Aqua Terra Worldtimer Master Chronometer Limited Edition out of reach for many. But it is safe to say that the future could bring a Worldtimer in more mass-produced versions and affordable materials, whether it is in the Aqua Terra sub-collection or otherwise. The Omega Aqua Terra Worldtimer Master Chronometer Limited Edition (ref. 220.93.43.22.99.001) will come on a brown alligator strap with a platinum-gold deployant clasp and will be available from Omega boutiques from December 2017. omegawatches.com