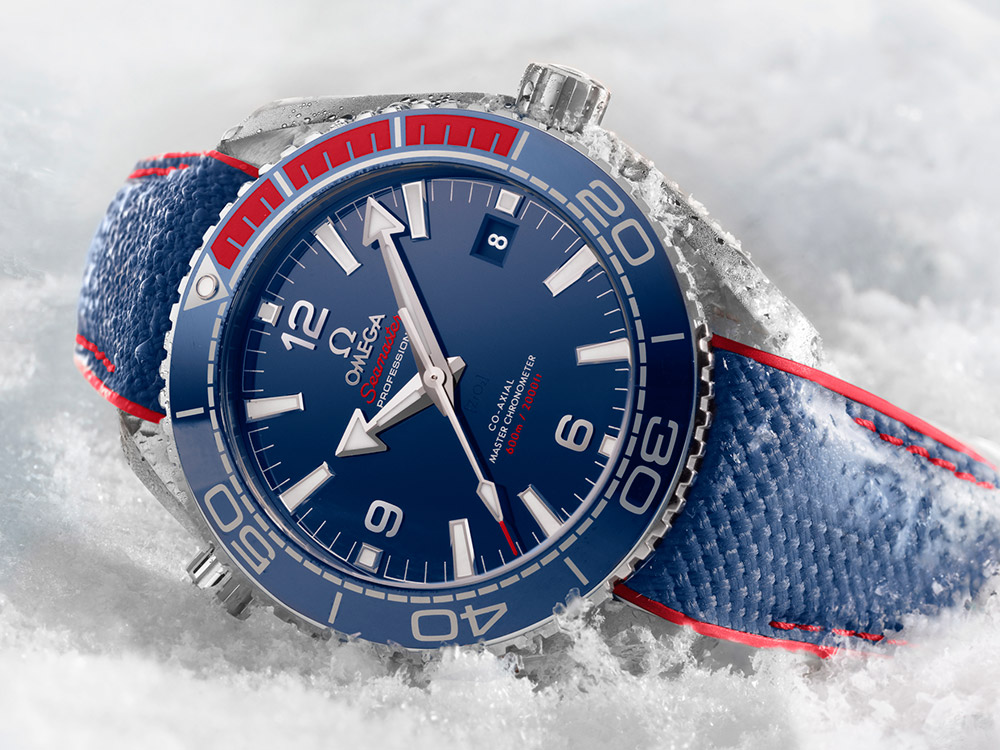 The Planet Ocean line of watches from Omega comprises some visually striking and technically innovative dive watches, and the Omega Seamaster Planet Ocean PyeongChang 2018 Olympics feels right at home in this respect. To start with, the watch comes in a familiar 43.5mm stainless steel case which is water-resistant to a healthy 600 meters and also features a manually operated helium escape valve at 10 o’clock. Although the helium escape valve is not a function which watch wearers would use often, this vestige remains. The dial on the Omega Seamaster Planet Ocean PyeongChang 2018 Olympics watch has been rendered beautifully in polished blue ceramic (that’s what the “ZrO2” on the dial refers to), which together with subtle hints of red in a few instances resonates with the Olympic theme of this watch, and representing the colors of the host country’s flag. The hour markers are presented in the form of applied rhodium-plated indexes with Arabic numerals at 12, 9, and 6, and being a serious dive watch, the indexes along with the entire handset have been applied generously with Super-LumiNova. In theory, it’ll look as cool as the lume on the Ploprof that our David Bredan reviewed here. The unidirectional rotating bezel features a blend of ceramic and rubber, and the entire diving scale including the lume dot at 12 have been presented in Omega’s Liquidmetal. Powering the Omega Seamaster Planet Ocean PyeongChang 2018 Olympics watch is Omega’s METAS-certified Co-axial Master Chronometer Calibre 8900. This movement operates at a frequency of 3.5Hz, offers a power reserve of 60 hours, and is the same movement which made its debut in the Omega Globemaster. The movement is well finished, and can be admired through the sapphire crystal case back, which has the words “PLANET OCEAN” and “LIMITED EDITION” engraved in blue along with the words “PyeongChang 2018” and the Olympic Winter Games logo embossed on the crystal itself. Omega is going to produce 2,018 pieces, with each delivered in a special presentation box. The watch will be on a blue structured rubber strap with blue-red rubber lining but also include an extra stainless steel bracelet. The Omega Seamaster Planet Ocean “PyeongChang 2018” Olympics watch will be priced at CHF 6,400, about a CHF 1,000 premium over the standard model. omegawatches.com