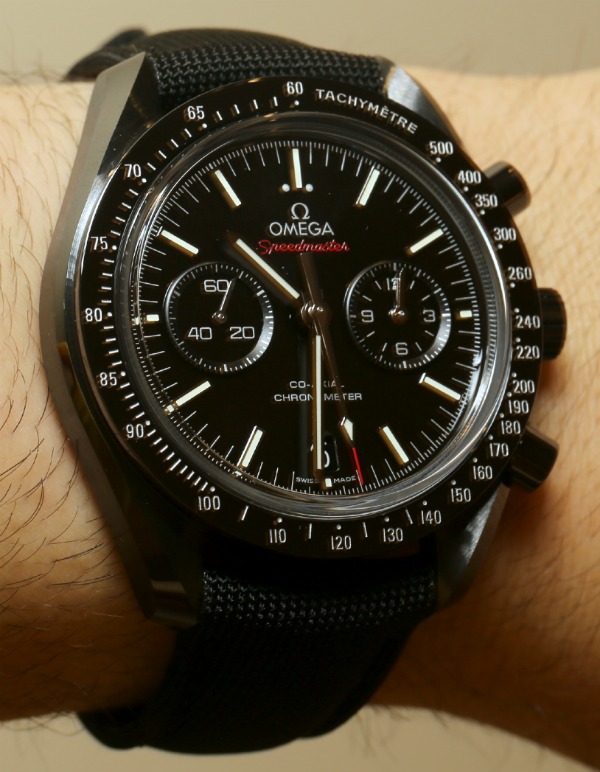 A simple evolution, the Omega Speedmaster Co-Axial Chronograph Dark Side Of the Moon (debuted here) proves remarkably lovable on the wrist. In a glossy black ceramic case with matching black ceramic dial, the “Moonwatch” naturally borrowed the name “Dark Side Of The Moon” from such things as the actual dark side of earth’s moon, and Pink Floyd’s famous album. Chronophiles will no doubt be interested to learn that 2013 is the 40th anniversary of the classic rock masterpiece.

I sat with Omega CEO Stephan Urquhart to discuss, among other things, the future of ceramic at Omega. It is certainly a major go. Ceramic stopped being a plaything years ago, and is now slated to sit between steel and precious metals as a mass produced luxury watch material for bezels, dials, and cases. At least at Omega, that is more or less confirmed for the future. Omega actually admitted that the Omega Speedmaster Dark Side Of The Moon watch was ready a couple of years ago. Omega just wanted to wait until the right moment to release it. It is already selling like mad to eager retailers. If the new upgraded Speedmaster was a fast hit, this is a speed boost. I am going to play some Dark Side Of The Moon Music and write about this puppy. The 44.25mm wide case is a cherry size on the wrist fitting oh so comfortably. Something about the design further makes it feel flatter than it is – which is a good thing. The rear of the case is one large sapphire crystal which domes over the movement giving you a hell of a nice view into the in-house made caliber. Omega didn’t just slap together a ceramic case. Careful detailing went into the precise textures and tone making sure that it was the proper shade of black and shined in just the right way. Areas of the case are brushed, but it certainly grabs your attention with some notable sheen.

Black watches are a mysteriously popular type of timepiece. Why they look so cool much of the time is something to perhaps ponder on another time (see Exploring the science behind black watches in our bi-weekly round-up). Nevertheless, black is both sporty and masculine in a rebellious way that no naked steel or titanium watch can seem to match. Ceramic has the added bragging point of being near impossible to scratch or tarnish. Sure a hefty blow might crack the case, but such a blow would probably damage the movement of watches with metal cases anyway. It is just a stunning execution for the typically conservative family of Speedmaster watches. Omega didn’t need to actually engrave “Dark Side Of The Moon” onto the rear of the watch, but they did. It isn’t a limited edition either. Thankfully, this is a standard model in the Speedmaster collection for now, and I promise you that given its success at the show, will be built upon in the future. Despite the black tones of the case and dial, legibility is fully intact as it would be on any other Speedmaster Co-Axial Chronograph. The baton hour markers and hands are properly sized and easy to read, maintaining the DNA of the original Speedmaster Moonwatch.

For years now, Omega has wanted to be eye-to-eye with Rolex. Unfortunately, with the amount of new pieces Omega releases they will never be able to maintain the same level of staunch conservatism as their rival who tends to release experiments such as this maybe a handful of times each decade (if that). You have got to give Omega kudos for supplementing its major product pillars with pieces like this. Omega knows how to equally cater to novice watch lovers as well as enthusiasts who can get behind the concept of a watch like this with haste. Inside all of the new 44.25mm wide Speedmaster Co-Axial Chronograph watches is the in-house made Omega caliber 9300 automatic chronograph movement. Silicon parts for accuracy (COSC Chronometer certified) and resistance as well as a long power reserve along with a Co-Axial escapement. Inherent to the movement’s design, are two hands in the right subdial to measure both the chronograph hours and minutes (it can also be used as a second time zone). This gives the Speedmaster Co-Axial Chronograph the flattering appearance of having only two subdials.

For a watch with such thin strips of lume, it is remarkably bright in the dark. Sporty touches of red complete the look along with the engraved tachymeter scale on the ceramic bezel. Instead of a leather or rubber strap, Omega decided to outfit the Omega Speedmaster Dark Side Of The Moon watch with a black cordura textile strap with a black ceramic buckle. Just a killer watch and one of my top picks from the Baselworld 2013 watch show. Omega will commercially release the Omega Speedmaster Co-Axial Chronograph Dark Side Of The Moon watch in the fall of 2013 and it will be priced at about 10,000 Swiss Francs ($12,000 USD). Worth the premium over the steel model? I think your heart answered that for you. omegawatches.com