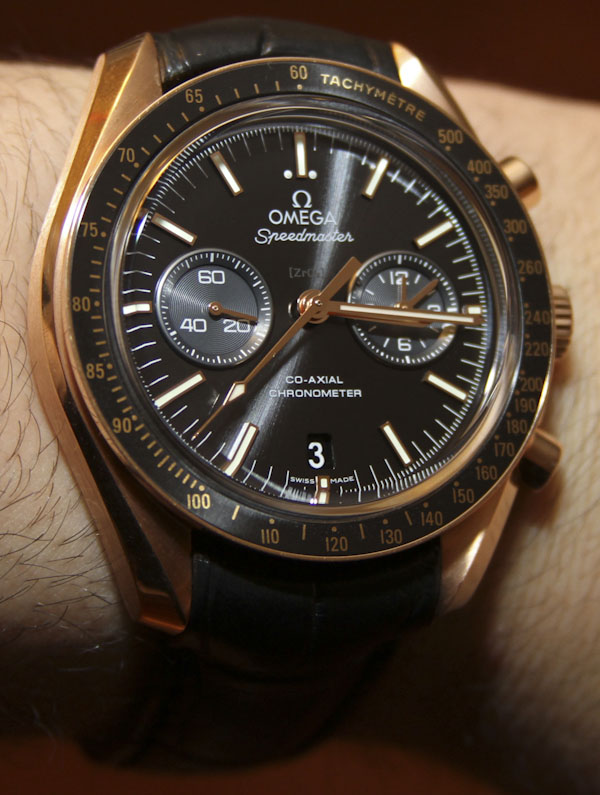 More than an icon, more than a legend, the Omega Speedmaster is one of the most popular and desired watches around the world. For over 40 years the sport watch that has been on the moon and on our minds, has also had a place on countless wrists. It has represented quality, durability, and adventure to many people. Omega has maintained and grown the collection over the years with all manners of variations, limited editions, and unique versions. All in all, the Omega Speedmaster for many people is the quintessential sport chronograph.

Purists love the Omega Speedmaster Professional Moonwatch. Like the originals from 1969, these pieces replicate today those watches worn on the moon years ago. Of course they are cool, but much of the time I lust for more modern timepieces. The new for 2011 Speedmaster Co-Axial Chronograph is the most modern Speedmaster to-date (and I first covered it here). Up to 44.25mm wide, it features a slick design, improved legibility, and a fantastic movement made in-house by Omega. Even with all that, it still retains the charm and timeless design of the original. For review, I have one of the high-end models offered in Omega’s special “orange gold ” (ref. 311.63.44.51.01.001). Similar to 18k rose gold, this gold alloy is a bit more orange in tone. I love the warmth of it. For more images of the steel Omega Speedmaster Co-Axial Chronograph watches you can check out this previous post here. I actually discuss the movement in more detail than I do in this review – so check out that article if you haven’t already in the past. By the way, this watch is also known as the Omega Speedmaster Moonwatch Co-Axial Chronograph. I am not sure whether to include the “Moonwatch” part when discussing it, but you will see that part of the name a lot when searching for the watch.

Something very unique happened in the course my reviewing this Omega watch. Omega decided that they wanted to change the dial on the gold version of the Speedmaster Co-Axial Chronograph watch. This caused a very long delay in my release of the review, because I wanted to show the retail version. The original dial choice for the 18k orange gold version was a ceramic dial. Omega then – and probably properly so – decided to go with a black enamel dial. I believe that the black enamel dial is standard on the platinum cased version of the Speedmaster Co-Axial Chronograph and Omega decided it was a good choice for the gold version as well. The bezel is also different on the enamelled dial version. After having had both watches to review, I decided to give you images of both mixed into this article. The ceramic dial version isn’t every going to be commercially available as far as I know – but it is good for you to see what “might have been”. Once again, note that only the black enamel dial is on retail versions of this Speedmaster Co-Axial Chronograph watch. For the most part, the gold and steel Speedmaster Co-Axial Chronograph watches are the same, but let me just identify the differences. Of course the gold model comes in the 18k orange gold case. It also used the caliber 9301 versus 9300 movement. These are identical save for the gold rotor and bridge over the escapement. Last, the gold version of the watch is a different dial. The standard Speedmaster Co-Axial Chronograph (and remember, Omega Speedmaster watches have delicately different names, so make sure you know which ones you are talking about) has a matte black dial, while the gold version has a baked black enamel dial. The other prototype version has a ceramic dial. Look closely right over where the hour and minute hands connect in the middle and you’ll see a light engraving in the dial that says “Zr02.” That stands for Zirconium Dioxide – which is the principle material most industrial ceramics are made of if I understand correctly.

The enamel dial on the gold model is lovely with its shine and deep black color. While the standard model is more utilitarian and true to the Speedmaster theme, Omega wanted to dress up the gold and platinum versions a bit. Other than those minor differences, a review of this model should apply to any of the new Omega Speedmaster Co-Axial Chronograph watches. This new bi-compax layout for the Speedmaster dial is really nice, and it allows for a centrally mounted date window at 6 o’clock. I like how the date is on a matching black disc with raised off-white numerals. Overall the dial is balanced and attractive. For me, this is the first Omega Speedmaster watch with genuine applied hour markers. Brushed and applied with luminant, these are not only attractive but considerably aid in making the watch legible in a lot of light conditions. They also create wonderful dial contrasts to make the watch as easy to read as possible. This also applied to the hour and minute hands. Lume application is fantastic. This actually surprised me given how thin the lume strips are. Nevertheless, the application of SuperLumiNova is consistent and thick making for a good watch to read in low light conditions. Needle hands and hour markers are a thing of visual and functional beauty in my opinion.

Over the dial is a curved sapphire crystal with a lot of AR coating. The top of it is mostly flat, but the sides are curved to replicate the look of acrylic crystals used for the original Speedmaster watches. A similar crystal is used on the rear of the watch to offer a wonderfully impressive view of the movement. Like a bowl, the rear sapphire crustal allows for a stunning view of the large-sized, in-house made caliber. It just wouldn’t be a Speedmaster without a tachymeter (tachymetre) scale bezel. Not that I would ever use it, but it is good to know that some things don’t change. The bezel does help frame the design of the watch well, and offers a little piece of utility that people might have once used “back in the day”. A little retro love never hurt anyone.

Omega has always designed really nice watch cases. The new Speedmaster is no exception. Fit and finishing are good of course, and the overall design offers a grand look where the lugs work right into the side of the case. From the side, it looks like a layered sandwich. The crown is large, but not too big and sits into the case to help protect it. Chronograph pushers are simple and traditional in style. At its heart, the Speedmaster has always been the “nice conservative sports watch”. It still is, and that is a really good thing in this context. In addition to having Omega’s Co-Axial escapement that helps the watch maintain good time over the long run, the 9300 (9301) calibers are also COSC Chronometer rated. I found it to be reliable and it kept good time. There are a few tricks to the movement. First (like the caliber 8500 movement) you can adjust the hour hand in one hour increments to make it easy to switch to local time while travelling. Though this is also how you change the date (by rapidly advancing or going back in time). Technically, you can also track a second time zone. This is done by using the chronograph subdial that has two hands. You start the chronograph exactly at midnight or noon for that second timezone, and the hour and minute hands for the chrono will double as the time for that other time zone. It is a nice little function to have available. Further details about the movement include that it has a silicon hairspring and double mainspring barrels with a power reserve of 60 hours. Overall, I am very impressed by the Omega caliber 9300 family movements because they really are something special above and beyond most basic movements from ETA’s regular stock.

The case is water resistant to 100 meters – which is fine. Omega doesn’t need to start mixing their Speedmaster and Seamaster watches too much. I really liked the case on my wrist. It felt like the right size and was very comfortable. The steel version of the Speedmaster Co-Axial Chronograph comes with a strap or fine steel bracelet. I believe that the orange gold version only comes with the black alligator strap (for now). The strap is supple and padded and designed to fit flush with the case. That tight fit makes it looks extra impressive. The strap is matched to a push-button folding clasp – here again in 18k orange gold. Perhaps Omega will offer a full gold bracelet down the line, though it would make for an extremely expensive watch given all the gold.

I think it is clear that this new model of Omega Speedmaster with the caliber 9300 (9301) movement isn’t going to end other Speedmaster watches. It is however, part of Omega’s larger push to assert their in-house movement technology and further modernize the collection. For me, this is my new favorite Speedmaster watch and a great offering by the brand. It is a superlative product with a great personality, history, and sense of utility. Choosing to wear it for both formal and casual occasions is common and overall, this piece is a delight to wear.

Much of the time when I discuss Omega watches people’s only complaint (if any) is about the price. It is true that over the last few years Omega prices have sometimes increased surprisingly. These are reasons for this and it does seem confusing for people who were once used to a lower entry fee for Omega goodness. Omega still feels like a good value though and the quality is all there. It is tough not to want one of these. Price for the steel Omega Speedmaster Moonwatch Co-Axial Chronograph is $8,700 and for this 18k orange gold version it is $25,700.