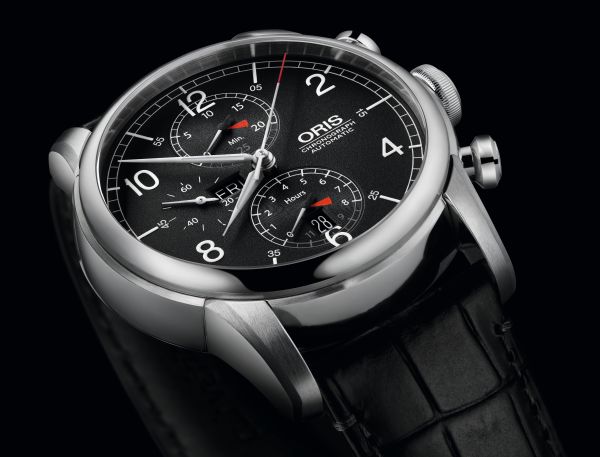 Oris Rallies Up A New Limited Edition RAID Watch For 2013 When it comes to auto racing, you don’t find much of it on TV outside of standard NASCAR and drag racing (at least not here in the States). Many years ago though, I discovered the sport of rally racing, and I was hooked. There’s just something fun about watching cars racing against the clock, sliding through (generally) unpaved surfaces. And that’s the sport that this Oris model is commemorating – rally racing.

But it’s not just any rally, it’s the RAID Suisse-Paris, which features classic cars taking a 600-mile route starting in Basel, and finishing in Paris. Oris has been the official timekeeper of the race since 2009, and has released a new watch for the race each year since. This year’s model is honoring the winner of last year, a Jaguar 420. The Oris RAID 2013 Limited Edition honors that car by virtue of styling on the dial which is inspired by the dashboard of the Jaguar. It also incorporates other elements of the 420, such as the red triangle and the fonts. To me, it’s a clean layout, with the chronograph sub dials balancing each other top and bottom. The small seconds (over at 9 o’clock) isn’t as pronounced, and blends in a bit. The other interesting bit to this dial is the placement of the day and date displays. The date shows up at 6 o’clock (fairly standard) and blends nicely into the 12-hour register. The day display, on the other hand, is in a location I don’t recall seeing before – at the 9 o’clock position, very close to the center of the dial. While intriguing, it’s hard to say (just from pictures) if this is something you’d get used to, or if it would become an annoyance not having it over at the more common position of 3 o’clock. These elements are driven by the Oris 775 automatic movement, which is based on the SW 500. The movement is housed in a 44mm stainless steel case (23mm lug width) , which itself is topped by a double-domed sapphire crystal, which has an AR coating applied to the underside. The caseback is solid and engraved, and the whole package is on a black leather strap with deployant clasp. Water resistance, for those curious, is rated at 50 meters. All told, this is a very cleanly executed chronograph, and one that tends towards the dressier end of the style spectrum. Which, while it might seem an odd choice to pair as an homage to a race through the elements, I think it’s fitting given the caliber of vintage iron that runs the race. If you’d like to pick one up, the 500-piece limited edition is available at a price of $3,950. oris.ch