Despite the fact that bronze seemed to be one of the #watchfam’s favorite subjects on social media in 2016, the rise of the “modern bronze age” of watches dates back much earlier to 2011 when Panerai acknowledged a small, but growing demand in the micro community for rugged divers cased in bronze. Their answer? One thousand pieces of the green-dialed PAM 382, which disappeared fast, and remains one of the Italian watchmaker’s most memorable (and collectible) special editions. Panerai appears to be looking to replicate that success with the newly announced Panerai Luminor Submersible 1950 3 Days Automatic Bronzo PAM 671, or “Blue Bronzo” – a beautiful and worthy successor to the watch that put bronze into the luxury spotlight and ultimately helped make patina great again. In case you haven’t been keeping score, SIHH 2017 has been the year of the Submersible for Panerai, where we’ve seen no fewer than six new special editions, each utilizing dramatically different case materials – from titanium and platinum-infused rose gold, to the introduction of BMG-TECH on this PAM 692. It’s a fitting backdrop to grant a shot at Bronzo redemption to anyone who missed out six years ago, and opportune timing for Panerai, as the bronze diver flood is still showing no apparent sign of abating. Some basics for non-bronzeheads, here. Part of the allure of bronze is that it’ll never look the same way twice. The cheerful, copper-colored CuSn8 bronze (an alloy of copper and tin) we handled under the show’s lighting will soon oxidize and lose its luster with the more contact the watch has with seawater or oxygen. This eventually yields a flat, dark brown appearance that tends to vary depending on the wearing habits and environment of its wearer. The oxidization process is a natural characteristic of bronze itself, which forms over the surface of the metal, and protects the metal beneath from corrosion. So, while the watch looks “aged,” that patina is actually an elemental shield of sorts, whose novelty of being “unique to its wearer” is almost a cliche at this point. That said, the allure is still impossible to deny, and likely the main driver still fueling the bronze trend itself. Dive with your watch, and it’ll show characteristics more in-line with the nautical equipment that inspired its casing. Sweat from exercise, humidity from tropical regions, etc. are all catalysts in the oxidization process – which can be reversed, but never fully erased. One detail that we appreciate with the new Panerai Luminor Submersible 1950 3 Days Automatic Bronzo PAM 671 is how all the luminous plots use a creamy “aged” Super-LumiNova – a slight mismatch against the brushed bronze case in its current virgin state, but a pairing that we think will look pretty amazing after a few months of continuous wear. All of the dial text, and even the date window (which uses a blue date wheel!) – utilize the same beige Pantone as the indices, yielding much more cohesive visual than the original Bronzo which used green SuperLuminova and gray text. While we’re on the subject, Panerai’s choice to bring the PAM 671 to market with a blue dial is likely to invite comparison to the Carl Brashear Bronze from Oris, but can you really blame ’em? Blue and bronze look amazing together, and this Panerai Luminor Submersible 1950 3 Days Automatic Bronzo PAM 671 is no exception. Its matte hue springs to life under the bright show lights, but is considerably more subdued in glances from indirect light – again, a dynamic contrasting effect that should look excellent once the case starts to develop some warmer brown tones. Several key details persist from the original Bronzo – including the 47mm case dimensions (it is a Submersible, after all), and the Panerai-manufactured 9000-series automatic caliber which is visible beneath the titanium caseback’s sapphire window. This time around, though, the PAM 671 gets the 9010 Caliber, which is a slightly thinner (by only 1.9mm) movement with three more jewels than the 9000 Caliber found in the original PAM 382. Timekeeping-wise, the same 4Hz amplitude and generous 3-day power reserve can be expected. I believe that this newer 9010 Caliber loses the bi-directional winding capability of the 9000, but gains the benefit of an independently adjustable hour hand. Not a bad trade-off when it comes to real-world practicality demanded by frequent travelers. The highly limited nature of the original PAM 382, and the relative scarcity of high-end bronze divers at the time is likely what drove its demand. Though Panerai is looking to replicate that success with an identical production run of 1000 pieces of the PAM 671, whether or not there’s still enough novelty remaining in the trend to drive similar demand for an ultra high-end bronze diver remains to be seen – especially when the Panerai Luminor Submersible 1950 3 Days Automatic Bronzo PAM 671 has a price of US $14,400. panerai.com 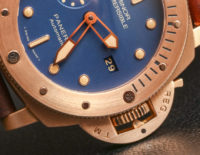 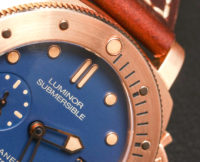 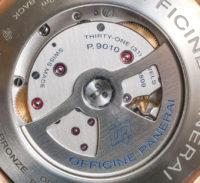 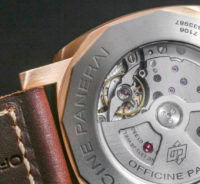 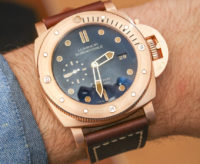 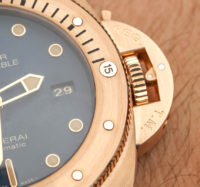