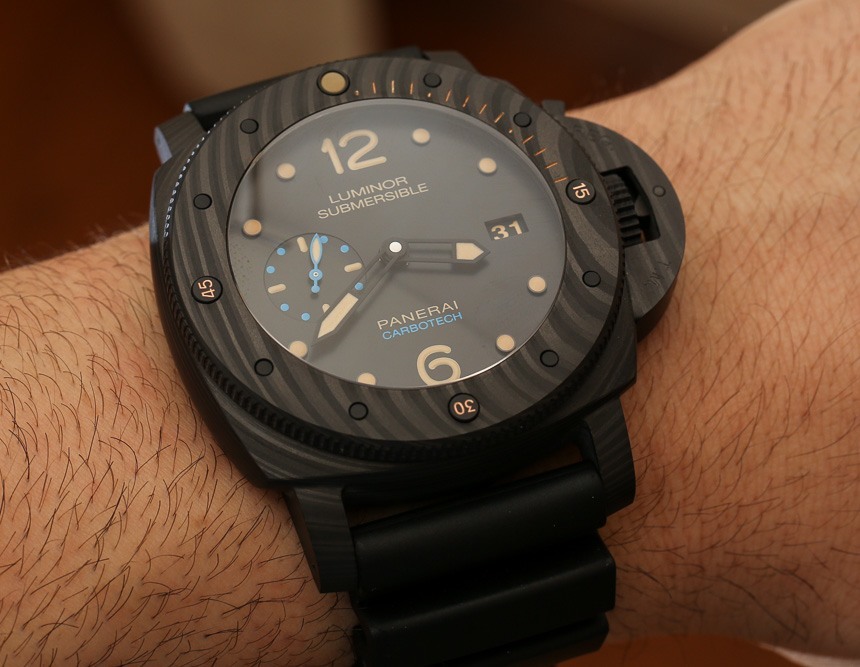 Oh metal, where art thou metal? One of the more interesting new-for-SIHH-2015 watches from Panerai is a timepiece produced from a material originally design for automobile brakes – which certainly isn’t metal. The Panerai Luminor Submersible 1950 Carbotech 3 Days Automatic (ref PAM00616, aka PAM616) takes the popular yet niche-loved Luminor Submersible 1950 watch and dresses it in a material that helps frame what part of the contemporary high-end timepiece market it all about; material innovation.

Before I talk about Carbotech, I would like to discuss the context within which traditionally metal watches are now cased in new, and often exotic materials. For decades, watch makers have attempted to replace common metals such as steel and gold with a range of other materials. Sometimes, this mission was to improve performance, but most of the time, it was intended to help timepieces cost less. The most important material was plastic, given its quick ability to be molded, light weight, and ability to be colored. The hallmark of a cheap watch for many years (and still today) is a plastic case. With that said, plastic was an amazing material able to democratize the timepiece and, of course, helped invent the modern sport watch. There would be no Casio G-Shock if it weren’t for plastic. For the high-end watch industry, experimenting with novel materials had an extremely small role in luxury culture until the last few years. The first major non-traditional material to become fully embraced by the luxury watch industry was titanium. A decade or so ago, carbon fiber became hot, and then ceramic invaded the luxury watch industry with speed so quick, I don’t think steel knew what hit it (or bent it). With non-metallic materials such as ceramic (mostly zirconium oxide) becoming popular with consumers, the trend at the top of the ladder was to begin seeking out increasingly obscure and hopefully aesthetically pleasing materials.

Brands like Panerai are actually only relatively recently adopting more exotic metals such as bronze, as well as ceramic – owing credit for some of the more assertive and bold experimentation to brands like Richard Mille. Inspired by the high-end automotive and car racing industries, Richard Mille more-or-less defied traditional notions of an ultra high-end mechanical watch by incorporating materials with no inherent precious nature. What was “expensive” about them was that they were not design to be used for watch parts and often machining them with the necessary tolerance for a watch case proved difficult and highly time consuming. The new era of luxury materials aren’t about inherent value like gold or platinum, but are rather about exclusivity and complexity in their production. Carbon fiber and ceramic are perfect examples of materials that themselves have almost zero inherent value. You cannot sell your ceramic-cased watch to anyone for the value of the material. This represents a major shift in how some consumers value their high-end watches, where the “coolness” of borrowing materials and aesthetics from other high-end pursuits such as exotic car collecting marries into the notion of what a luxury watch should be. Suddenly, brands like Richard Mille (among a few select others) made it important to migrate industrial materials to watch making in order to help separate yourself from the pack.

In one sense, this trend might be a predictable outcome of how mechanical watches inherently need to adapt and conform with modern tastes, interests, and technology. On the other hand, some collectors complain that a focus on materials 1) doesn’t actually make watches better or more durable in many instances, and 2) is a way of distracting from the fact that too many watch makers (not all) aren’t innovating where they believe it counts – in the mechanical mechanisms which the movements contain within the watches. Debates among watch collectors are nothing new (and help impassion this colorful industry), and most agree that adding new things to the watch industry (whether welcome or not) is a good thing. Trickle-down horology dictates that what is popular at the very top will eventually make its way down the ladder a bit. Not that Panerai is a “down ladder” brand, but compared to the typically $500,000 and up price of a Richard Mille, most might consider the mostly $20,000-and-under price of a Panerai to be much more accessible. Suddenly, we have a lot of traditional brands (and to be fair, Panerai is a brand obsessed with its own traditions) have investigated how they too can integrate exotic materials into their timepiece families.

What is the most interesting thing for me is the origin of the materials they choose, as well as how they like to discuss those materials. Over the last few years, it has become more and more faux pas to “merely” use carbon fiber. Instead, the most reputable watch makers need to go out there and find exotic or branded forms of carbon fiber and its many derivatives. This actually isn’t too difficult, because so many companies around the world produce various forms of carbon fiber, ceramics, plastic, polymers, etc… as well as hybrids thereof. Carbotech as a company produces a range of materials which are often based much on carbon or carbon fibers, and also ceramics. Their products are mostly related to brakes, such as brake pads, rotors, and other related components. And now Carbotech can be found in your very own wearable watch – which, hopefully, will not stop on a dime. At 47mm wide, the base Panerai Luminor Submersible 1950 case wears better than you’d expect with its short, stubby lugs which prevent it from extending too far past your wrist. I like the style of the rotating diver’s bezel, and the case is water resistant to 300 meters (even in Carbotech). The rear of the watch is in black-colored titanium, and compared to most other materials, such as steel, Carbotech is much lighter in weight – adding to the PAM616’s wearability. New for 2015 is an updated rubber strap that is in essence a really high-quality traditional diver’s strap with “springy” ends for comfort. It’s got a cool blue-colored Panerai logo on it, and is the diver’s strap you always wished Seiko made. Inside the Panerai Luminor Submersible 1950 Carbotech 3 Days Automatic PAM616 is the Panerai in-house made Calibre P.9000 automatic movement with three days of power reserve operating at 4Hz. On the dial, you have the time with subsidiary seconds dial and the date. In addition to the aged lume color on the hands and hour markers, you get a new blue color on the dial meant to highlight the “modern” look of the Luminor Submersible Carbotech – and in a lot of ways, it succeeds. While I still personally find it difficult to take some of these modern construction compounds as bona fide luxury materials, I am intrigued by the stories behind them as well as the wearable conversation piece waiting for someone to ask about what your watch is made out of, allowing you to joyously explain.

The PAM00616 isn’t cheap either – demanding a hefty premium for the privilege of wearing a watch with a case made out of a trademarked carbon cocktail. I mentioned earlier that the Panerai Luminor Submersible 1950 Left-Handed PAM569 in titanium (limited to 1000 pieces) was one of my favorites, and it came with a price of $11,600. The Panerai Luminor Submersible 1950 Carbotech 3 Days Automatic PAM00616 (not a limited edition) is priced at $18,400. panerai.com