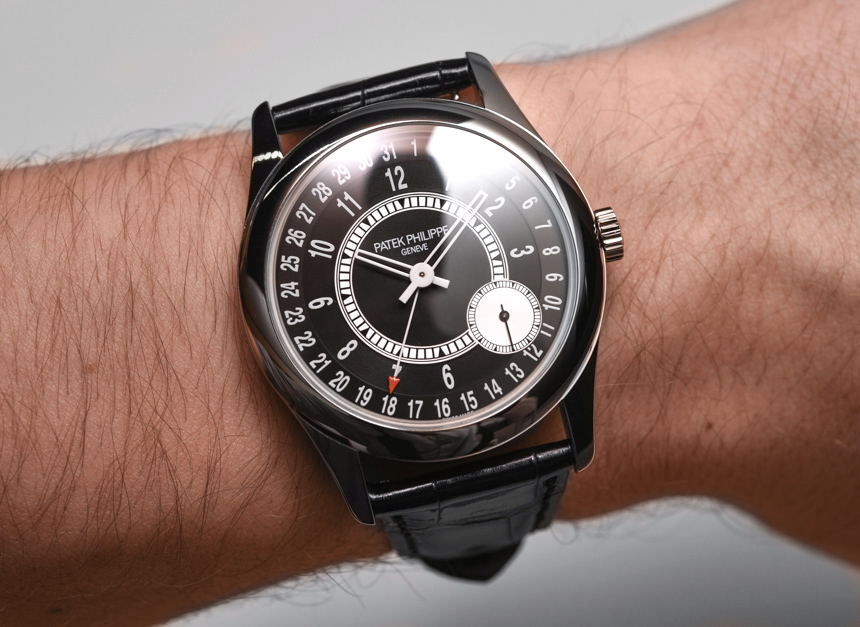 The Patek Philippe Calatrava line of time-only watches has often been unfortunately relegated to live in the shadow cast by the brand’s more complicated pieces like their perpetual calendars or their instantly recognizable sport watch models in the Nautilus and Aquanaut. Honestly, it’s understandable since demure 3-hand time only watches have been a cornerstone of the line, but every now and then there are standouts that do something a little different. At this year’s Baselworld we saw the release of the Patek Philippe Calatrava Ref. 6006G, which gets about as close to whimsical as a simple time and date watch from the brand can really get. The Calatrava Ref. 6006G is the successor to the outgoing Ref. 6000 which was introduced back in 2005. Aesthetically similar to the outgoing 6000 series, the major change in the 6006 is the much-needed size update to 39mm from 37mm. I think even those people who prefer a more classic sized watch would agree that 39mm is a good compromise for a contemporary dress watch. Besides, if you’re not a fan of 39mm, I’m sure you can find an old 6000 out there. Now, onto the dial, which has four unique surfaces. The black, almost-grainy outermost ring indicates the date in white Arabic numerals and you’ll note the date hand pointing to the 18th in the image above. The red-lacquered arrow tipped hand replaces the old lunar crescent, which I think is a good move here as the arrow matches the aesthetic design of the watch much more here. Moving inward from the date ring is the circular brushed hour ring using a larger number font in Arabic numerals to indicate the hours. Moving further inward is the minutes scale, which is white (almost silvery) with a circular guilloché pattern. This same design extends to the seconds subdial which shares the ring pattern of the minutes scale. You can also see the circular guilloché pattern extending out from the center of the seconds subdial. This all results in a richly textured and vibrant dial that would otherwise fall flat considering the two-tone color scheme here. You’ll notice the off-centered seconds subdial between 4 and 5 o’clock and this was one of the primary identifying features of the Patek Philippe Calatrava Ref. 5000, which was the watch that preceded the now-outgoing Ref. 6000. First introduced in 1991, the Ref. 5000 utilized the 240 PS movement, which was characterized by this off-center seconds sub-dial. One of the most welcome refreshes in the Ref. 6006 is the use of new broad, skeletonized hour and minute hands. Set against the mostly black dial, they are legible without being too disruptive or blocky due to their open-worked nature. Overall, it’s an aesthetically pleasing and thoughtfully done dial. It’s not like other Patek Philippe watches and I suspect that reason will help justify why some people will like it and why some people won’t. Turning the Patek Philippe Calatrava Ref. 6006G around, you’ll see the 240 PS C movement. The automatic movement is as attractive and immaculately done as you’d expect a standard Patek Philippe to be. While nothing exemplary from the brand, I do believe that the Calatrava Ref. 6006G will be the only watch utilizing this movement, at least for the time being. Made of 191 parts and operating at 21,600 vph (3Hz), the 240 PS C has a minimum 38 hour power reserve and maximum 48 hour power reserve. The part of the movement obviously intended to catch the eye is the 22k gold rotor with the Patek Philippe Calatrava cross engraving. As I mentioned, the case is 39mm wide and a slim 8.84mm thick and with 22mm wide lugs, it has a good, substantial wrist presence. The case is done in 18k white gold, which has always been one of my least preferred materials. When I want gold, I prefer yellow or rose gold. Otherwise, it’s Platinum when considering pieces that look more subdued but are obvious to anyone with a somewhat trained eye to spot as being that pinnacle precious metal. White gold just leaves me uninspired, but that’s a personal preference. What I do imagine here for the Calatrava Ref. 6006 is a model in steel, but I’ll hold my breath for now. The Calatrava Ref. 6006G comes on an alligator strap with an 18k clasp. It’s standard, though I have to say it feels just a little too formal considering the “whimsical” dial of the watch. Still, it matches the general aesthetic of the watch and isn’t something I spent too much time thinking about for good or bad. A fun, unusual offering from Patek Philippe, the new Calatrava Ref. 6006G will be available later in the year. It’s going to take a particular kind of buyer who likes the Patek heritage and wants a simple dress watch but has also seen their share of watches that look like heirlooms straight out of the boutique. Again, I think Patek Philippe would do well to make a steel option but for now it will only be available in white gold. Priced at just around $30,000, it’s about what you’d expect for a gold Patek Philippe time-only watch. I’m tenuously positive about the watch but it’s a substantial sticker price for the quirky cousin in the Calatrava family. patek.com