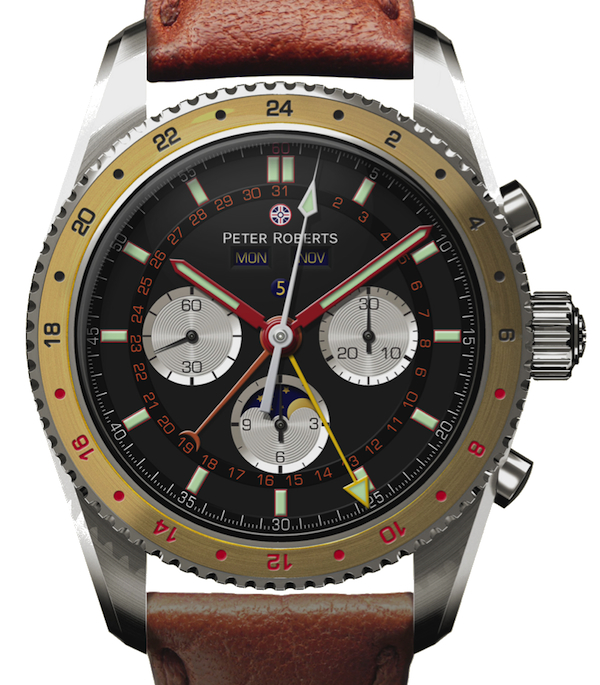 Here is a watch that we unfortunately didn’t see at Baselworld this past April, the new Peter Roberts Grand Complication 5. “New” is used softly here as this watch is actually based on a design and concept from 1972. Peter Roberts is a renowned British watchmaker, lecturer and consultant that created a watch, called the “Concentrique,” as his graduation project from the famous WOSTEP (Watches of Switzerland Technical and Educational Program) watchmaking school. It is a timepiece he still wears all the time, and has been asked for quite sometime to produce and sell.

Forty years ago, the Concentrique was ground-breaking as it was the first wristwatch with five centrally mounted hands, offering the time, chronograph seconds, pointer date, and a GMT hand all spanning from the center of the dial. Roberts was only 20 years old when he developed the mechanism that allowed for the Concentrique, and the watch was never commercially available or put into production, until now. Using new-old-stock movements, Peter Roberts has announced a limited run of 44 total examples of the Concentrique Grand Complication 5. Based on the original model from 1972, the limited edition model is limited by the available supply of suitable movements. While the original base movement was the Valjoux 726, the commercially available models will be powered by the similar Valjoux 88. Peter Roberts will be personally working on all examples to integrate the Concentrique mechanism into these NOS movements. The Valjoux 88 is a mechanical hand-wound column wheel chronograph with 19 jewels and a power reserve of 46 hours which will be completely hand decorated and visible via a sapphire display back. With the Concentrique mechanism in place, the new Grand Complications 5 will offer time, a chronograph, a second timezone, a full calendar, and even a moon phase display (more than the original watch). Since graduating from WOSTEP, Peter Roberts has worked with many notable Swiss and English brands, including Rolex and Bremont, where he helped to develop Bremont’s Roto-Click bezel and the antimagnetic floating movement mount exemplified in the MB and Supermarine series. He also taught for over a decade at Hackney College and can proudly list Peter Speake-Marin and Stephen Forsey (of Greubel Forsey) among his many pupils. Today, Peter Roberts works as a consultant within the watch industry in addition to finally producing watches under his own name. Production will be limited to 40 steel and bronze examples and just four 18k white and yellow gold models, costing £18,000 and £28,000, respectively. The Concentrique Grand Complication 5 will measure 42mm across with 22mm lugs, sapphire crystals front and back, and 100 meters water resistance. While I’ve never been much for a two tone watch, the dial of the Grand Complication 5 looks great and despite its many features, still manages a chronograph with hours and a classic full calendar display with two small windows just above center dial. This is a true watch lover’s watch, by one of the most respected living watch makers we know.

I rather like the fun use of color and the addition of the moon phase display, but wish the limited edition models also had the cool screw down chronograph pushers that were seen on the original model. With such a limited run on a design with an interesting history, the Concentrique Grand Complication 5 makes for one rather interesting and very rare watch. To say these are collectible would be an understatement. Look out for some hands-on time with these goodies from Mr. Roberts soon. Don’t forget he is personally making each of these by hand so we need to wait until one is available. peterrobertswatches.com