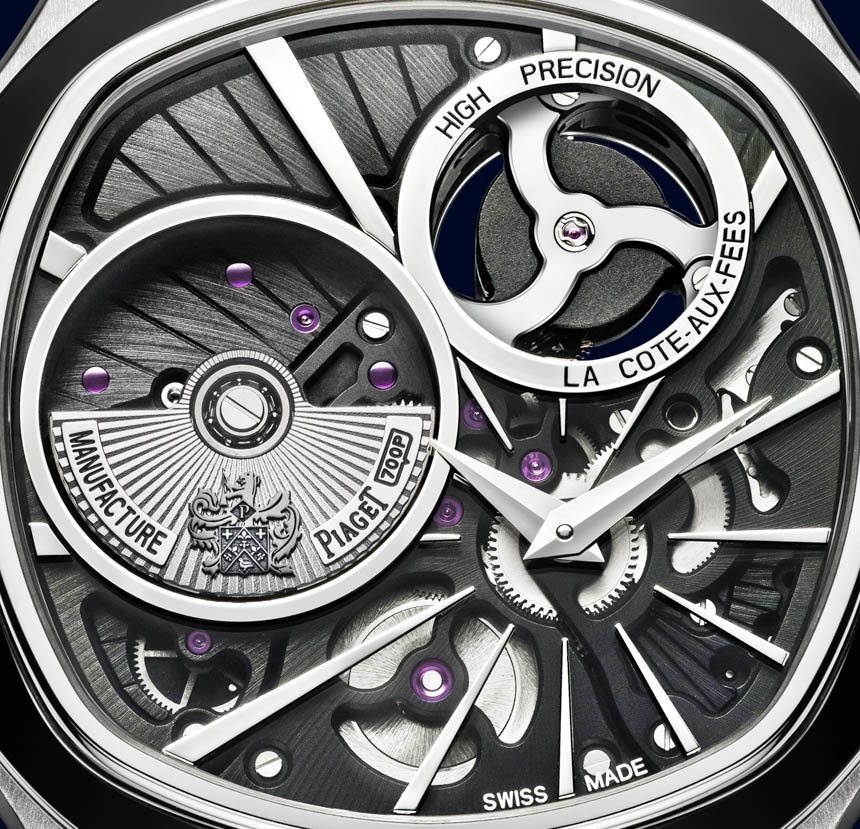 Well, this Piaget limited edition watch for SIHH 2016 wasn’t expected, but it is certainly interesting. People will definitely be talking about Piaget’s $70,000+ mechanical/quartz hybrid that, in design, borrows from the previously released Piaget Emperador Coussin Tourbillon (hands-on here). Visually, just by looking at the watch, you’d have no real way of knowing that it contains a piece of more-modern technology in addition to its “mechanical backbone.”

According to Piaget, this limited edition Emperador Coussin XL 700P is dedicated to the 40th anniversary of the first quartz watch movement that Piaget developed in-house back in 1976-  the caliber 7P. Piaget continues to offer quartz movements for most of its women’s watches, and it isn’t alone in doing so, as many high-end women’s watches from brands such as Cartier, Patek Philippe, and Audemars Piguet all contain quartz movements. This is, however, exceedingly rare when it comes to the same for high-end men’s watches from these brands. Inside the Piaget Emperador Coussin XL 700P is the in-house produced 700P movement which is new for 2016. In essence, it is probably similar to something between a Seiko Kinetic and Seiko Spring Drive from a technological standpoint. Though at this price level, you are going to see a lot more high-quality finishing and attention to “luxury” detail. The 700P movement is mostly mechanical, especially when it comes to the fact that it is powered by a spinning automatic rotor. Piaget hasn’t mentioned a mainspring in their documentation, so I assume that the spinning of the automatic rotor directly charges a capacitor which then feeds energy to a quartz crystal-based regulation system, this is why the concept is so similar to that of a Seiko Kinetic. The 700P doesn’t have a “battery” in the sense that the power reserve is only 42 hours when fully “charged.” Piaget designed the 700P to replace the traditional mechanical balance wheel and escapement with an electronic quartz regulator that is hidden from view when looking at the movement. Like I said, when viewing the movement, a trained eye can easily tell it isn’t a traditional mechanical caliber, but it obviously isn’t a quartz movement either. I believe Piaget’s goal was to once again introduce the concept of a fine Swiss quartz movement similar to those that existed in the 1970s starting with the famed Beta 21. Aesthetically, the 700P looks beautiful with its hand-finished parts and combination of light and dark elements. The movement is produced from 298 parts and operates at the typical quartz frequency of 32,768 Hz. The funny thing is how the Piaget documentation discusses the benefits of quartz versus mechanical timekeeping as though it was new. Actually, for some people it may be. The bias against quartz watches among luxury watch lovers is so deep that I am pretty sure many mechanical watch lovers don’t even know many of the specifics of how quartz movements work, or why there were so preferred to mechanical movements from a performance perspective when they first started to become popular in the late 1960s and especially during the 1970s.

The 700P is 5.5mm thick as a movement, and the entire watch case is probably twice that thickness with a case diameter of 46.5mm. The Emperador Coussin XL retains its hip cushion-shape in 18k white gold with a black ADLC-coated bezel giving it a bit more of a sporty look. On the dial is a solid gold and engraved micro-rotor that connects directly the “quartz generator” and also a subsidiary dial for the time. I am not totally sure, but I believe there is further visual movement from the element on the dial to the upper right – which is supposed to spin at a rate of 5.33 turns per second. On the back of the watch is a visible power reserve indicator which is very interesting for this type of watch, and helps echo the functionality of the all-mechanical versions of the Emperador Coussin XL. Attached to the case is a black alligator strap.

I personally appreciate that Piaget is doing this as a true movement maker with true history in this area. Smartwatches have made electronic watches cool again and the traditional Swiss watch industry now has new reason to become reacquainted with its own history working with electronic movements. There is a sort of amusing irony to a watch like the Emperador Coussin XL 700P that I am sure is not lost to Piaget, but at the end of the day you get a very nice looking, very accurate, and probably very reliable luxury conversation piece. We will continue to see how the luxury watch industry plays with unique concepts like this, which are strictly for the dedicated collectors who can appreciate the interesting things done here, and who can use the irony of the watch as an affirming reason to choose a watch like this. Of course, the 700P will be easy to criticize given the larger trend the luxury watch industry has had with its position toward men’s quartz watches, but then again that just makes the conversation around what Piaget is doing all that more interesting.