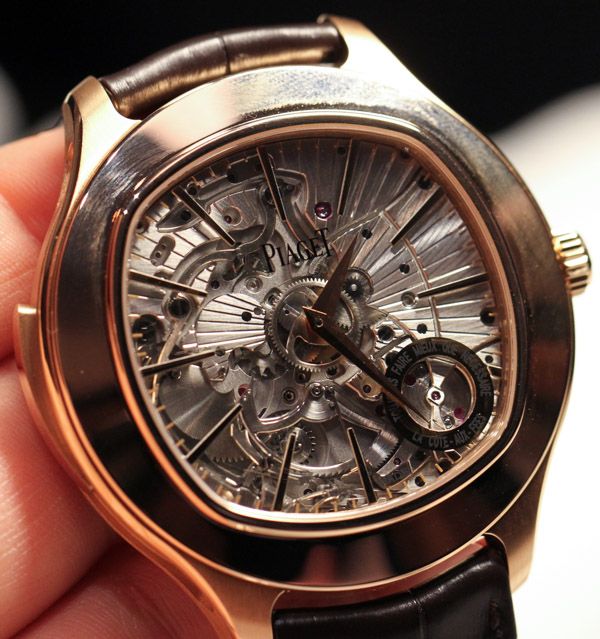 The stand-out collector’s (wealthy collector) Piaget watch for 2013 is the Emperador Coussin XL Ultra-Thin Minute Repeater (that we debuted here). In our previous article on the watch we discussed most of the technical specs and we won’t repeat all of those here. This post is about hands-on with the slim and formal minute repeater – a continuation of Piaget’s quest to offer as complete a family of ultra-thin watches as possible.

At 48mm wide the cushion-style case isn’t for everyone. It isn’t for all Piaget fans either. Many of Piaget’s most excellent watches are thin dress watches at about 40mm wide or even less. A 48mm wide minute repeater is a big (literally) departure from those simple classic. However, Piaget doesn’t intend for exclusive models like the Emperador Coussin XL Ultra-Thin Minute Repeater to compete with its other models in any significant way. Stuff like this lives in a relatively thinly populated world of quarter million dollar plus timepieces. Quarter million for the “simple” 18k rose gold model. Then you have the decadent, yes somehow not too blingy 18k white gold model with full pave diamonds. Piaget kept it classy by using baguette cut stones for the bezel, which are arranged fantastically. Brands like Piaget often like to throw a lot of diamonds at watches, and it is easy to disregard these watches are fodder for unwise spenders, but the skill and techniques used to produce then are quite  intensive. They don’t just dip the cases in a bath of loose diamonds and let super glue do its magic. No, stones must be carefully selected, cut, and set. The side of the case uses smaller round-cut stones for an interesting effect.

When we debuted this Ultra-Thin Minute Repeater back in December before SIHH 2013, we mentioned that Piaget broke a new slimness record for producing the world’s thinnest automatic minute repeater movement. At 4.8mm thick the mechanical movement is probably twice as thick as Piaget’s thinnest movement, but given the complications 4.8mm is really slim. The entire watch is just a bit under 10mm thick. Again, slim, but not “ultra-slim” compared to watches in general. Again, one must consider the complications and features. On the wrist the wide and relatively flat Emperador Coussin XL case is mostly flat and comfortable on the wrist. Its unique shape looks like some fancy dinner plate, serving up a healthy portion of metal and gears.