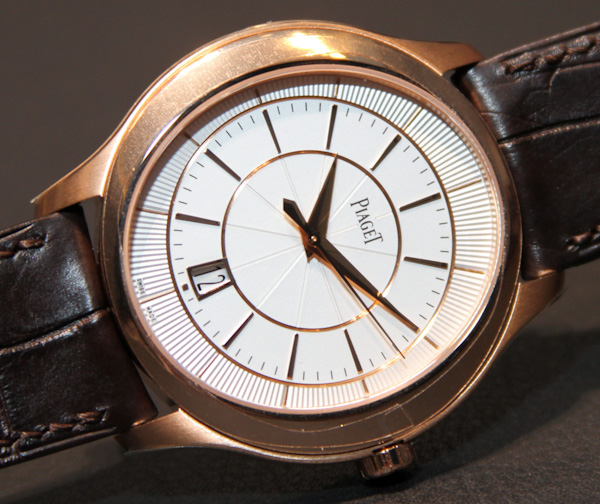 Say friend, are you looking for a fancy formal watch that isn’t quite like anything else but won’t make your friends do a double take? Well then Piaget might just have something for you. This new collection for 2012 is a sort of amalgamation watch taking into consideration design cues from many different Piaget timepieces including the Polo, Emperador, and Altiplano. It isn’t round, it isn’t a cushion, it isn’t minimalistic, it isn’t sporty. It is somewhere in between all these things and feels like Piaget’s best stab at recreating the magic which is the durable design of Patek Philippe’s Calatrava family.

What do they call it? Francophiles will love the “Gouverneur” name which is merely “Governor” in French. I wonder if there is a French equivalent of the English “eh governeh?” Though for us English speakers, spelling “Gou-ver-neur” is a bit of a drag. That won’t stop me from liking the watch though… right goveneh’? The major design idea in the watch is the use of multiple ellipses. The vertically aligned ellipses of the dial window are opposite to the horizontally aligned ellipses on the face. The case makes a few uses of ellipses as well. It is like a melting pot of imperfect circles, strangely satisfying as though it was a touch of successful abstract art in the middle of a black tie affair. Which leads me to mention that Piaget places the Gouverneur in its Black Tie watch collection right there with friends such as Emperador and Emperador Coussin. Being no pedestrian timepiece means a few high-end choices in cases made from 18k rose or white gold. In fact, each version of the watch comes only in either rose or white gold. For example, my favorite piece is the ref. G0A37110 Gouverneur three-hander that only comes in 18k rose gold. If you wish for white gold then you have two options and they only come with diamond decorated bezels. That’s right, Piaget gives you the white gold case for free if you buy the diamonds. That said, the 18k white gold versions are the three-hand ref. G0A37111, the Gouverneur chronograph (ref. G0A37113 ), and the tourbillon (G0A37115). A rose gold Piaget Gouverneur chronograph is also available as the ref. G0A37112, as well as a rose gold version of the tourbillon (ref. G0A37114).

On the wrist, the size of the roundish Gouverneur felt quite good. The case is 43mm wide and pretty thin. Each of the versions has a slightly different case thickness, with the three-hand being the thinnest at just 9mm thick. The tourbillon is actually only a hair thicker at 9.2mm, while the chronograph is 10.4mm thick. All in all, this is certainly in line with Piaget’s mission to produce elegant, very thin timepieces. Note that the Gouverneur watches I shot still had some protective plastic on them (because Piaget doesn’t like our oily phalanges), so excuse the covers on the couches and be aware that these pieces are much shinier and better finished in real life. In contrast to the often minimalist look of other Piaget Black Tie watches, the Gouverneur is more busy in its approach. While it is not a 1950’s era design, it does seem to have that era’s hallmark fascination for sunburst displays and dauphine hands. It is actually a very retro design without feeling at all retro. You saw elements of this sunburst design in a more complex form in something like the Piaget Emperador Coussin Tourbillon (which was a rather spectacular thing from a mechanical standpoint), as well as many other Emperador and Emperador Coussin models. While the Gouverneur has redundant markers on the dial, they are all there in the name of style, and I think they work best on the three-hand models. Those models seem to have the right mix of complexity and breathing room. By the way, the three-hand models contain Piaget’s well regarded in-house made 800P automatic movement that is visible through the sapphire caseback window. Finishing on the movement is as always, pretty sexy and is has a power reserve of 80 hours (pretty good for a 4mm thick movement).

The chronograph versions of the Gouverneur contain the Piaget in-house made caliber 882P automatic, which has that cool looking black PVD coated automatic rotor. It is essentially a reworked version of the caliber 880P movements that are contained in the Polo Chronograph watches. Though, the 882P has a bi-compax chronograph (flyback), and the date at 6 o’clock. I like the concept of the Gouverneur chronograph but feel that the design suffers a bit from the chronograph subdials which are too thick, looking like golden donuts, on the otherwise thin element appointed dial. The most technically complex of the Piaget Gouverneur watches are the tourbillon models. These guys actually contain movements designed for the rectangular Emperador models so the movements are not round but rather rectangular in shape. Inside the Gouverneur tourbillon timepieces are the in-house made Piaget caliber 642P manually wound movements, which are reworked Piaget caliber 640P movements (found in some Emperador models with the same tourbillon and moonphase indicator combo). Rather than a disc based moon phase indicator, these models feature a dial with a hand. It is a nice alternative, though I find myself more drawn to the traditional moon phase indicator with the hiding and reappearing moon pictures. The Piaget caliber 642P is nice looking and is also very thin at just 4mm thick – certainly in the “ultra-thin” department of movements.

With almost a rectangular case and almost a cushion case, the Piaget Black Tie collection is complete having almost a round case. The Gouverneur is a fine timepiece family with a unique style and all that Piaget pedigree (that I know I like). You can even wear it during non-hoighty-toighty tuxedo affairs, and with Piaget being a serious maker of movements, you never have to feel like you are wearing something from a high-end fashion brand. I last want to applaud Piaget for updating their website with prices. Admittedly I don’t frequent brand websites enough (given my work), but when I was researching this article and found the watch prices (save for the pricier tourbillons) on the Piaget website – I almost shed a tear of joy. “We’ve come so far people!” Good of the industry to start sharing a bit more of these – you know – little details. Price for the Piaget Gouverneur starts at $26,000 for the rose gold three-hand model, $37,000 for the rose gold chronograph, going up to $45,000 and $56,000 for the white gold with diamonds versions of those pieces respectively.