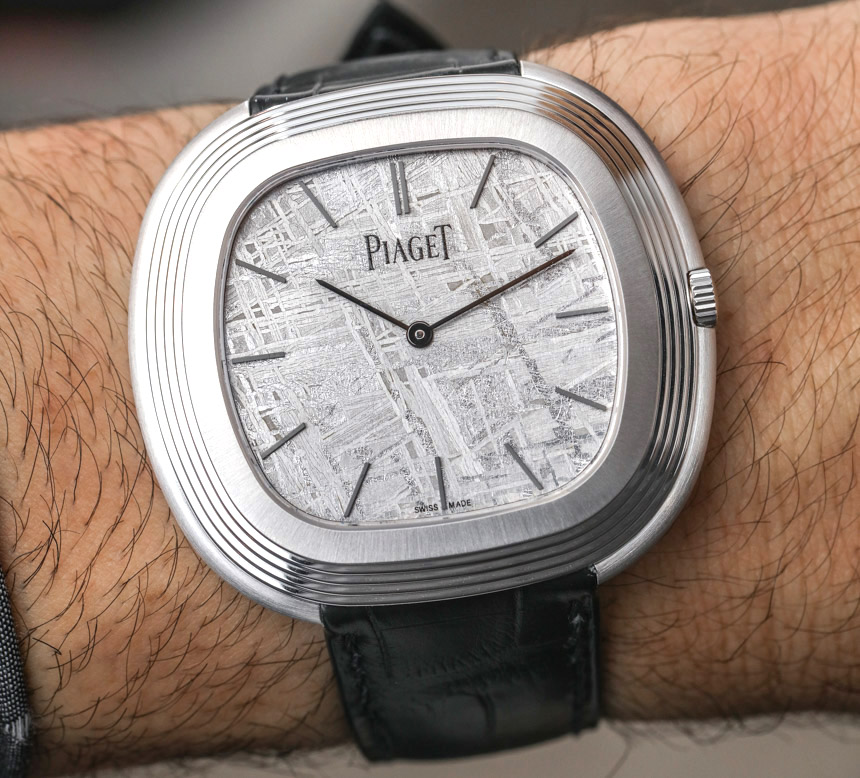 At SIHH 2017, Swiss Piaget released two new versions of a timepiece originally re-leased back in 2015. Back then it was called the Piaget Black Tie Vintage Inspiration watch and was produced as a limited edition. For 2017, the Piaget Vintage Inspiration watch is in two new versions, again as limited editions, with a modest price decrease, and a very sexy meteorite dial option. “Vintage Inspiration” is probably not the best name Piaget could have chosen for this or any other watch. If only because a great majority of their timepieces are inspired either wholly or partly by vintage models. Piaget really wanted to call it the “Andy Warhol,” but couldn’t for obvious legal reasons. According to them, the reason they brought this design back in the first place was because they saw images of Mr. Warhol wearing a vintage Piaget timepiece that looked a lot like it (only in a smaller size). So for those that know (which now includes you), “Vintage Inspiration” is Piaget’s way of saying “if Andy Warhol liked it, so might you.” The original limited edition “Black Tie” model from 2015 had a glossy black dial in an 18k white gold case. For me, it was a bit too much on the simple side, though it certainly enjoyed its fair share of love and affection. The 2017 Piaget Vintage Inspiration watches come either in an 18k rose gold case with a black dial and matching rose gold hour markers – as opposed to the 2015 model that didn’t have hour markers – or my favorite which has an 18k white gold case and the beautiful naturally white meteorite dial (and markers). The legibility really does it for me. Piaget has a tendency to make glossy dials with thin needle-style polished hands. That shiny-on-shiny combination makes for an elegant look, but one where legibility can really suffer when exposed to things like… light. The matte surface of the white meteorite mixed with the black hands and hour markers make for the perfect level of contrast such that legibility and style are harmoniously intact. This is Piaget bliss at its best, and I really hope this dial design finds its way into more watches such as those in the Altiplano collection in the future. Andy Warhol was a watch guy – at the least, he had some nice pieces from brands such as Rolex, Cartier, and Piaget. His taste in timepieces was remarkably conservative, actually – at least when judged by today’s standards. I’m not even sure that a timepiece like this with a meteorite dial would have been something that he would have worn. Perhaps that just adds to the appeal for me. Piaget timepieces have never been cheap, and the “Vintage Inspiration” (I so wish they had come up with a better name for it) is no exception. This is certainly the type of item where you pay a premium for something which so clearly is a luxury art piece. But that’s OK, Piaget has never really been a brand that prided itself on accessibility (even with the Polo S), so the exclusivity element will likely be a plus for its target buyers. Describing the case shape of the Piaget Vintage Inspiration is challenging using the standard vocabulary we tend to use for such things in the industry. At 45mm wide and 43mm tall, the case is just 7.6mm thick. The bezel is a series of rising steps that elevate inward as you move from the outer case to the dial. The layered look is interesting and, as I mentioned, is best described as “artsy.” It’s elegant how the crown is inset to be more or less flush with the case, and on the wrist the presence is bold and visually fascinating, but it’s clearly not for everyone. The natural light gray meteorite dial is beautiful, in my opinion. The Piaget logo is printed on the reverse of the sapphire crystal, and the 18k white gold hands (colored matte black) offer just the time, not even with the seconds. The piece is really a dress watch in spirit, even though it doesn’t necessarily come across that way each time you look at it. Though, you can logically determine that if it isn’t a sport watch or anything else like that, then it can only be one thing…. a dress watch. Inside the Piaget Vintage Inspiration is the in-house-made Piaget caliber 534P automatic movement. Nothing fancy, but it’s pretty. Wearer’s won’t know that since the caseback is solid, meaning that you can’t see the movement. It does add to the volume of gold in the watch, though… which helps justify the asking price. Attached to each of the Piaget Vintage Inspiration watches is a black or gray alligator strap and matching gold buckle. The 18k rose gold version will be preferred by many given its overall more conservative design, but I can’t help but love the reference G0A42237 model in 18k white gold with the meteorite dial and very legible face. For me, it simply checks off a lot of boxes that I like in a watch of this type, and has a nice pedigree to match. It is limited, however, so if you have the extra means to pick up one of these rare watches while they are around and appreciate it as much as me, you might want to do so. The Piaget Vintage Inspiration for 2017 watches are each limited to just 28 pieces and are priced at $25,000 in 18k rose gold and $30,000 in 18k white gold with the meteorite dial. piaget.com