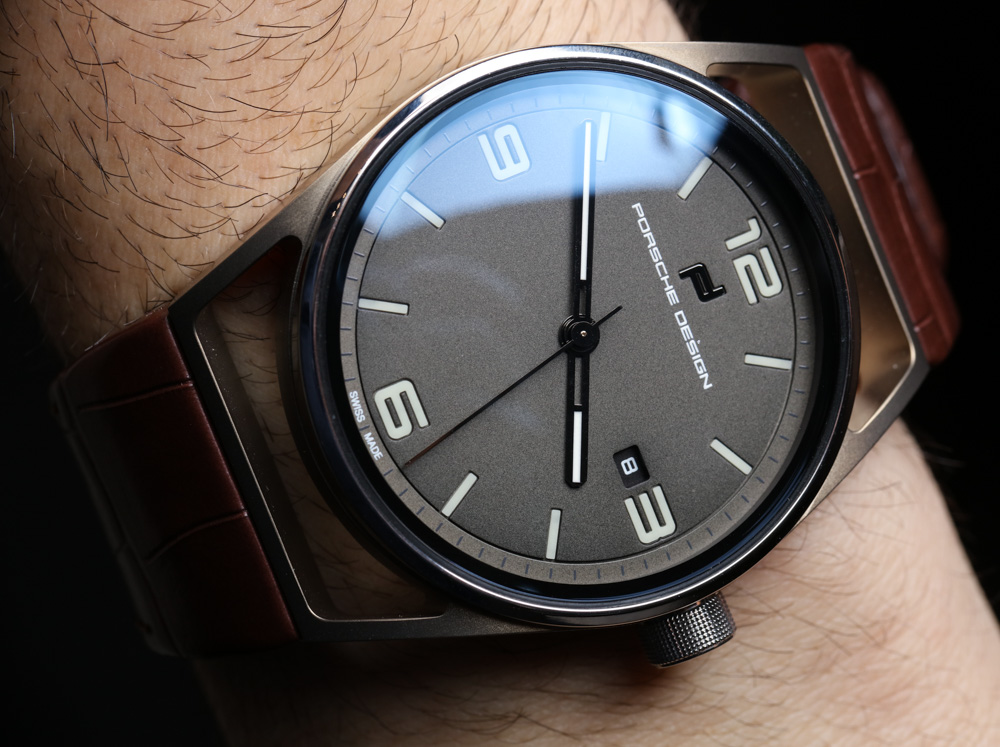 I joke with the people at Porsche Design that their entire brand theme is “black and titanium.” In a big way that is true, and for the most part, this is what many of their timepieces heavily emphasize. For example, most of the 1919 Eternity watches are technically part of the “Porsche Design 1919 Eternity Black Edition” collection… which, of course, feature titanium cases. The odd man out of the entire collection is a rather cool albeit niche model from Porsche Design which is the reference 6020.3.03.004.07.2 Porsche Design 1919 Datetimer Eternity that has a “bronzed-color” titanium case with “gray-green” dial and is fitted to a brown alligator strap. Yes, there is some fashionable trendiness going on here, but Porsche Design points to the original Porsche 356 automobile as the direct inspiration for this model, as well as of the entire 1919 collection overall. At 42mm wide and 11.92mm thick, the Porsche Design 1919 Datetimer (and 1919 Globetimer GMT) case doesn’t seem that large (the 1919 Chronotimer chronograph is 14.90mm thick) but given the rather long lug-to-lug distance and how the straps connect, these look best on wrists of a thick girth. Unfortunately, while I very much like the design of these watches, this is truly one of those situations where the case might very well be “too large for my wrist.” Then again, as many of you know, I happen to have smaller-sized wrists so many people might not have a problem. Look closely at the reference 6020.3.03.004.07.2 again, and you may notice that even the dial design is different than all the Porsche Design 1919 Datetimer models. Rather than the painted numerals, they are cut into the dial a bit and filled with lume. This and the relative sparsity of the dial along with the bold hands (and mixture of Arabic and baton hour markers) is why I consider this model to be “Panerai-esque.” The outer-most chapter ring scale does have minute markers on it as well, and there is a date on the dial at 3 o’clock (which, nicely, doesn’t remove the 3 o’clock hour indicator). Porsche Design points to the skeletonized lugs as a means of reducing the visual mass of the case, and I think it works. The curved and skeletonized lug structure does assist in making the case feel a bit thinner and more “architectural,” but there is the issue of how it wears on smaller wrists, as I pointed out above. In addition to the alligator strap offered on the reference 6020.3.01.003.06.2, Porsche Design offers a rubber strap as well as a titanium bracelet on the 1919 Datetimer collection of watches. The Porsche Design 1919 case has a domed and AR-coated sapphire crystal over the dial, is water resistant to 100 meters, and has a solid titanium caseback on these these three-hand Datetimer models. The 1919 Chronotimer chronograph is the 1919 model that has an exhibition caseback window. While most of the case is given a sand-blasted (aka sand or glass-blasted) finish, the crown, caseback, and thin bezel are offered with a polished finish. Inside the Porsche Design 1919 Datetimer (Eternity or Black Edition) watches is a Swiss Sellita SW200 automatic mechanical movement. This is a more basic movement, and while it works well, I think this collection would have benefited from something a bit fancier such as something with a longer power reserve. It isn’t that the SW200 is a bad movement (because it isn’t – it operates at 4Hz with 38 hours of power reserve), but rather that it can be acquired in much less expensive watches, and I like it when Porsche Design does everything possible to promote the more premium features of their watch collection which is not only connected in a familial sense to Porsche cars, but also that the Porsche Design brand has a large assortment of appropriately premium items such as sunglasses, luggage, and apparel. The Porsche Design 1919 Datetimer Eternity is one of the most elegantly simple watches that Porsche Design has produced to date. The combination of modern architectural-style watch design and Bauhaus aesthetics works quite nicely – assuming the watch fits your wrist properly.