You can see that previous article for more information, but in a nutshell, rather than work with outside partners, Porsche Design will be doing watch production themselves. Apparently, that also means in-house movement production in the future, but we aren’t there yet. For now, Porsche Design has released two new timepieces (essentially the same watch with different case finishes, but with two different names) that are the Porsche Design Timepiece No. 1 and the Porsche Design Chronograph Titanium Limited Edition. Nice watches, but the names are a bit bland. Let’s further be clear that both watches are limited editions, and that the difference in naming is pretty confusing for what is essentially the same watch. Having said that, let’s take a look at this new Porsche Design watch itself. Porsche design has a long history with both black PVD-coating processes as well as using titanium as a watch case material. I believe Porsche Design was the first to use PVD (physical vapor deposition) on a production wrist watch. That was in the early 1970s, and it was a big deal because, for the first time, you could have a black-colored metal watch case that wasn’t merely painted. The Porsche Design Timepiece Number 1 and Porsche Design Chronograph Titanium Limited edition each feature 42mm wide titanium cases, with the former being PVD-black coated. Each is offered in a bead-blasted finish with gives them a neat looking industrial “tool watch” feel. With just 50 meters of water resistance these aren’t super sport watches, but I have a feeling that number will get better in the future. There is a sapphire crystal over the caseback with a view of the movement as well as an AR-coated crystal (coated on both sides) over the dial. Note that the rear crystal is tinted black to give the movement a dark looking finish. 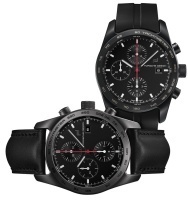 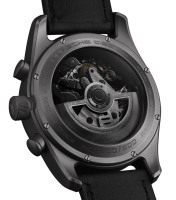 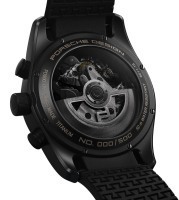