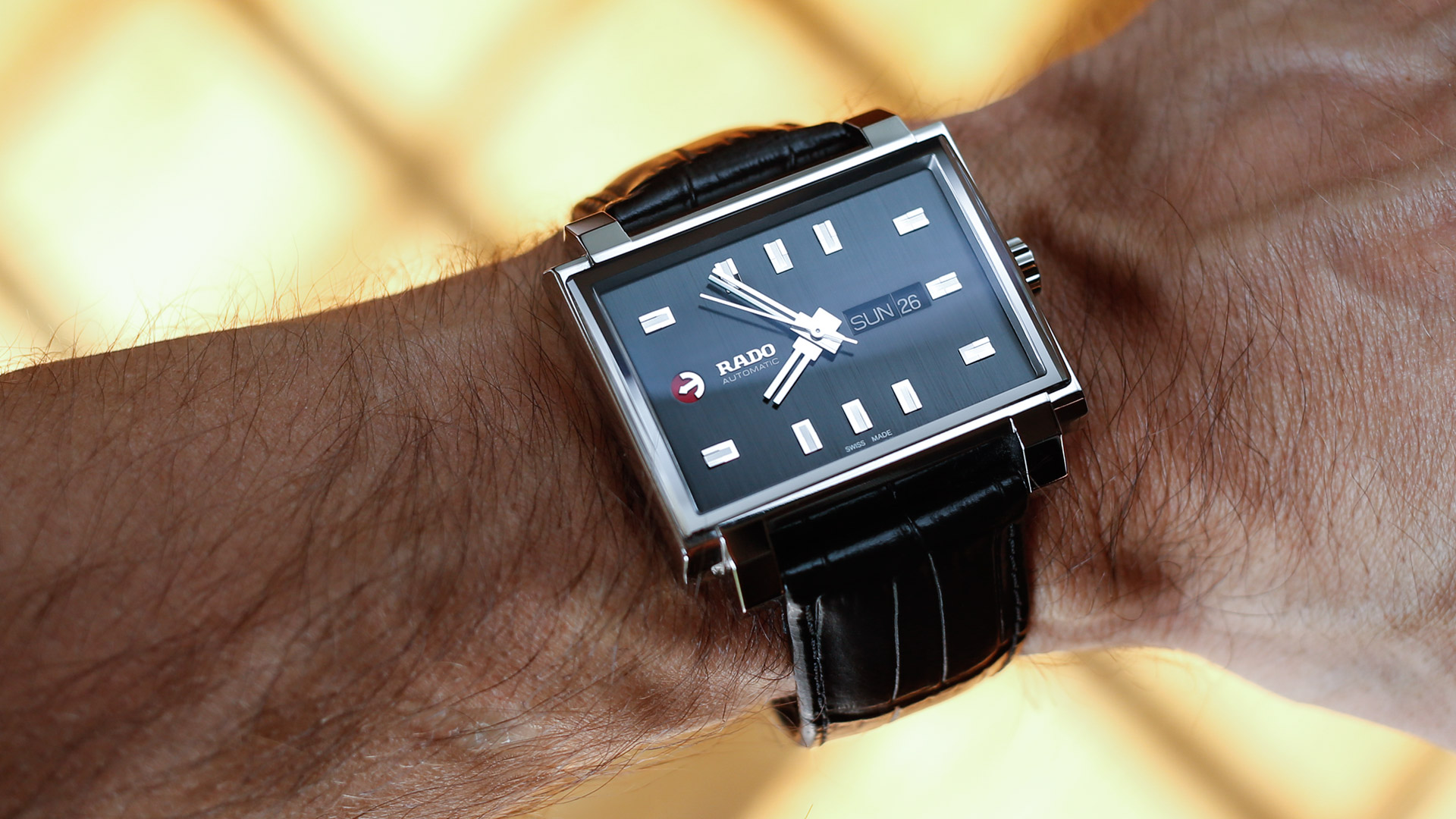 The experimental designs of the 1960s and 1970s seem to offer a deep well of “inspiration” for watch companies, and apparently the perfect mix of distinctive originality and nostalgia to win over 21st-century consumers. While some of those yesteryear watches might be too far-out to be brought back, even as “modern reinterpretations,” Swiss Rado has never shied away from the quirky. The horizontally rectangular Rado Manhattan represents the era well, and now reborn for 2018 with a titanium case and the Swatch Group’s 80-hour power reserve movement as the Rado Tradition 1965 XL, it is one of the funkiest watches I’ve worn in a while. Apparently inspired by the Manhattan skyline.

The Rado Tradition 1965 XL is based on the earlier Rado Manhattan which, in turn, based its design on the Manhattan skyline, we are told. The original version of the Rado Manhattan was produced from 1965 to 1973, and it was aimed at the American market with the intention of leveraging recent attention gained by the pioneering, ultra scratch-resistant Rado DiaStar. The Rado Captian Cook, that was also recently brought back and reviewed here, is also from around that time — though it is easy to see why the Captain Cook dive watch will have more mainstream appeal. The Rado Tradition 1965 XL, on the other hand, draws its charm from the era’s more eccentric side. Distinctive would be one way to describe the Rado Tradition 1965 XL’s visual impact on the wrist. In this case, the “XL” part of the name (usually describing clothing rather than watches) is pretty appropriate — more so than, say, the also rectangular but significantly smaller-wearing Cartier Tank Solo XL. Horizontally rectangular and 44mm wide, the Rado Tradition 1965 XL wears about as prominently on the wrist as the 37mm Manhattan was probably perceived to in 1965 by contemporary watch size standards. I’ve worn watches with wider diameters — the 50mm-wide Sisu Carburetor Q1 reviewed here might hold the record for the largest I’ve actually been able to wear — but it bears repeating that square or rectangular watches wear larger than their measurements make it sound. The official dimensions of the Rado Tradition 1965 XL are 44mm by 44mm and 11.8mm in thickness. To clarify, 44mm wide does not include the crown, I believe, and the 44mm length means lug to lug — as the shape of the case not counting the lugs is clearly not square but rectangular. The thickness includes the curved sapphire crystal (with anti-reflective coating on both sides) that is one of my favorite parts of the Rado Tradition 1965 XL, as I always enjoy crystals with some sense of shape and depth. Here, the shape of the glued box crystal is an unusual one that helps the whole design flow more elegantly and avoid being overly boxy. My understanding is that crystals with corners (as opposed to those that are round) present a particular challenge for water-resistance, making the original Rado Manhattan’s claimed water-resistance rating of 220m all the more impressive for its time in the 1960s and the modern Rado Tradition 1965 XL’s rating of only 50m somewhat disappointing in comparison. The Rado Tradition 1965 XL, however, has no pretensions as a sport watch. Neither is it a dress watch due to its size, or even what one could term a “versatile” watch. “Fashion watch,” perhaps? Why must we limit ourselves to such confining labels anyway? While the Rado Manhattan watches were made of steel, the new Rado Tradition 1965 XL has a titanium case. That’s a good thing since it would probably be quite heavy in steel, and its titanium lightness naturally improves wearability for what is still a watch with a bulky presence. While it is possible to polish bare titanium, it can often have a drab finish and be easily scratched, so the Rado Tradition 1965 XL has been given a polished PVD chrome coating. That chrome sheen is not something too often seen on many watches and, combined with the titanium, lends further to its overall period feel. The Rado Tradition 1965 XL case shape recalls the idiosyncratic designs of the 1960s and 1970s, and that retro style is reinforced by the distinctive hands and indices. But the case itself does not necessarily seem as if of another era, and other elements of the Rado Tradition 1965 XL come across as very modern. The black leather strap, for example, is of high quality and goes a long way in making the Rado Tradition 1965 XL feel very slick and contemporary, at least as of the current late 2010s. It’s got a folding clasp made of steel that mostly folds under the strap with only a small polished push-button buckle showing on the outside, and an extension makes it easier to slide off and on. Swapping straps will be a little more difficult not only due to its very wide lug width, but finding a strap to match the Rado Tradition 1965 XL’s quirky style might be the bigger challenge.