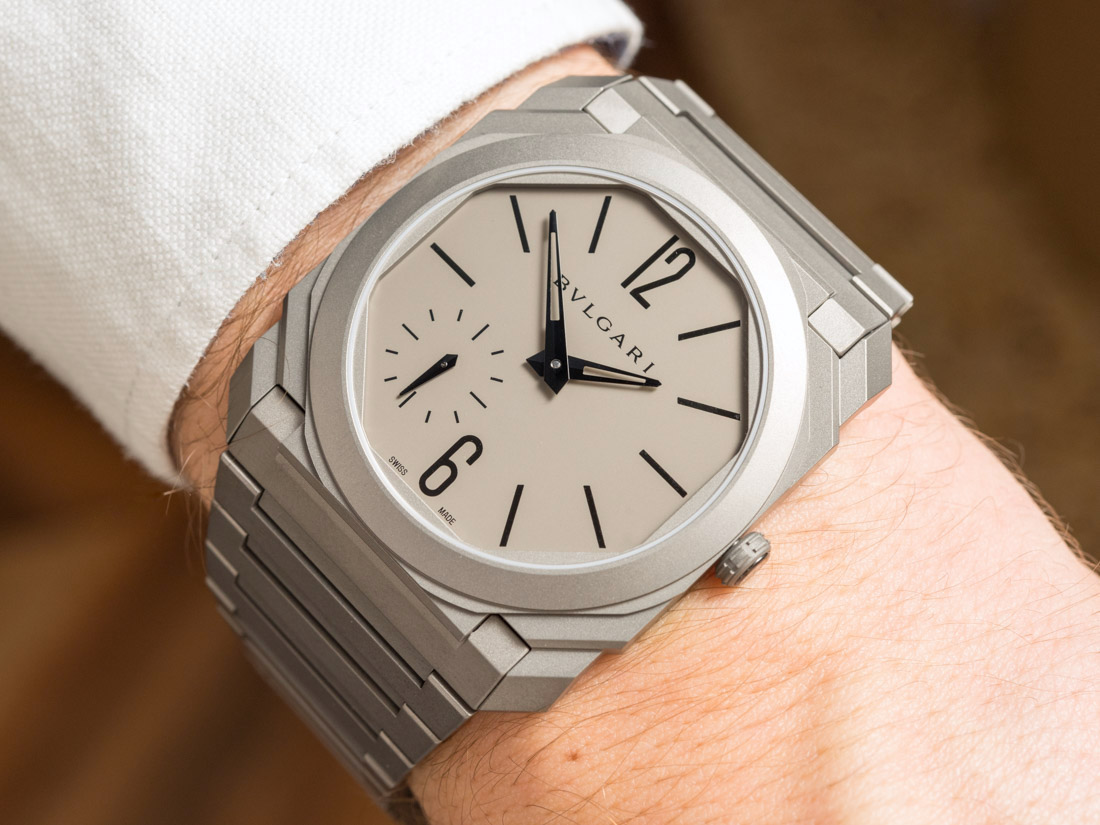 While most big brands seem to be saving their R&D pennies for another year as they dedicate 2017 to celebrating, ahem, their “heritage” and paying homage to watches their predecessors had made anywhere between 1917 and 1976, we saw the quiet debut of a competitively priced, record-setting, ultra-thin, and yet decidedly bold watch with the Bulgari Octo Finissimo Automatic. In all seriousness, we were scratching our heads as we tried to put together a list of truly modern watch releases from BaselWorld 2017 – meeting after meeting, what we hear is heritage this, 1948 that… and while that trend and its effects we’ll discuss in a separate article, in a nutshell (and humor me a personal note here), it’s been getting so repetitive and unimaginative that, by day 3 at Baselworld, this vintage-fever has become both somewhat ridiculous and frustrating at the same time. Vintage and vintage-inspired is of course all nice and well, so long as something else from this century also gets to happen. Sure, the Bulgari Octo is based on Genta’s Octo from a couple decades ago, but Bulgari did what a global powerhouse brand had to and has turned Genta’s exceedingly funky and decidedly inconsistent designs into a full collection of Octo watches that is more elegant, more modern and, ultimately, decidedly more masculine. Those marked as Finissimo are Bulgari’s most recent and proprietary additions to the Octo range, with Finissimo standing for the ultra-thin variants – of which multiple exist at this point.

Bulgari set a new course for the Octo back in the early 2000s and the Bulgari Octo Finissimo Automatic, the very watch you see here, I think, has crowned that 15-year evolution so much so that it is not only the greatest Bulgari Octo to date, but also one of the best casual/dress watches altogether. The Bulgari Octo Finissimo Automatic’s in-house-designed and -made BVL 138 micro-rotor automatic movement is a modern and case-filling 36mm wide and an extraordinary 2.23mm thin – throwing Piaget off its, frankly, long-lost throne by coming in a fraction thinner than their 12P micro-rotor movement that was 2.3mm thick. The Bulgari Octo Finissimo Automatic’s BVL 138 caliber has a power reserve of about 60 hours – impressive from such a small movement – and runs at 3Hz. Bulgari says they had to somewhat limit the size and capacity of the mainspring because there is a limit to how strong a spring the small, Pt950 platinum micro-rotor can replenish with energy. On show through a sapphire case-back, the movement looks as though it was printed on a sheet of paper and put into the case – I found myself rotating the watch to its front and back in disbelief that this movement really is in there, ticking away. Thanks to this remarkable movement, the result is a 40mm wide Octo Finissimo case that is just 5.15mm thick and, as it is crafted from sandblasted titanium, is incredibly light at less than 50g with the leather strap included, and around 80 grams on the full titanium bracelet. The result is a watch that wears as though it wasn’t even there – so thin that it never gets caught on the sleeves or anywhere else and so light that I found it a matter of few minutes to forget about its presence on my wrist. The visual treats of the Octo Finissimo Automatic are very tricky to capture in images, so I’ll try to describe it: the texture of the sandblasted titanium case appears to verge on matte and satin and, in fact, so does that of the leather strap. I don’t think I have seen such surface treatment on a leather strap before: even in very strong light (as in the image above) it looks matte, while in a dimly lit room it looks even more grey and matte, almost like rubber – making for a perfect fit for the high-tech vibe of the blasted titanium case. The strongest criticism I had with the regular-thick Bulgari Octo Chronograph (reviewed here) was its much too bulky strap that took so much away from the Octo’s design. Here, however, the alligator strap matches the thin case beautifully both in its color, texture, and thickness, working incomparably better than it did with the chronograph. The sandblasted titanium bracelet and its buckle had to be specially designed as well: it’s the typical Bulgari Octo bracelet with the very wide and thin links that easily adapts to the curve of the wrist as the bracelet “turns” in small and fine increments around it. It’s comfortable and refreshingly different from the usual 3-5-link designs – but is definitely worth trying on to see how it aesthetically completes the case (for better or worse depends on personal taste, naturally). The double-folding buckle was designed in a way that it folds into a hollowed-out part in the bracelet because without it the bracelet and buckle together would have been considerably thicker than the case itself. This, in turn, makes for a rare folding buckle design that is actually comfortable as it is almost perfectly flush with the bracelet itself, saving your wrist from having the protruding “butterfly” parts digging into it. What makes the Bulgari Octo Finissimo Automatic stand out from the rest of casual/dress watches is more than its thinness, though: with its combination of materials, lightness, comfort and proprietary movement (we asked, and Bulgari says they have no plans on supplying these to anyone), it is as refreshing in this sea of vintage-releases as its sand-colored dial among all the black ones… All this said, how it actually fairs in everyday life as a casual/dress watch with its unusual color combination and bracelet-like profile we’ll figure out when we get one in for review.

Price for the Bulgari Octo Finissimo Automatic on that weird and weirdly great matte alligator strap is CHF 11,900 and it is CHF 12,900 on the full titanium bracelet. bulgari.com