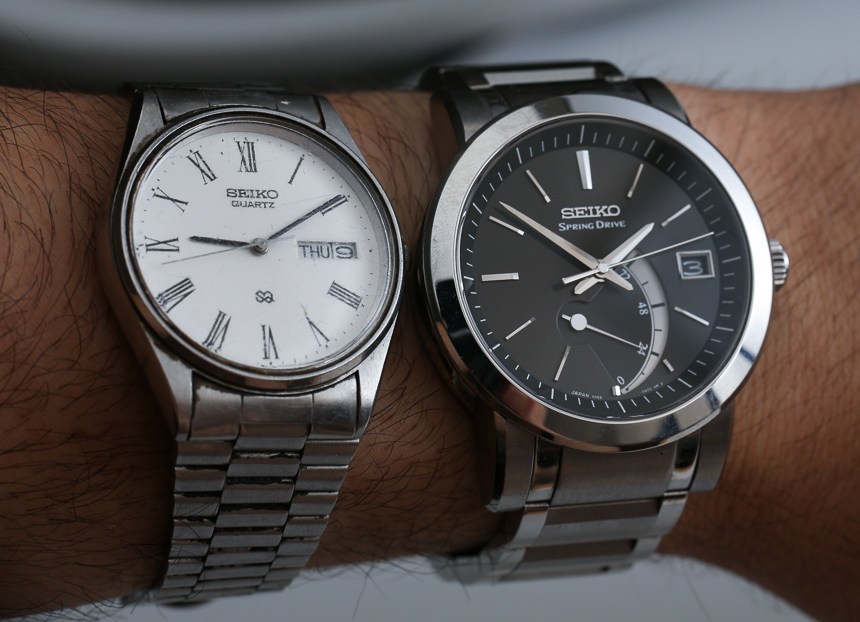 Remembering My Dad’s Watch And The Birth Of Responsibility This article is unlike most that you’ll read on aBlogtoWatch because it is inherently personal. Those who know me are aware of the fact that I am the most comfortable behind the camera, and while I regularly make a point to inject a healthy amount of opinion into our coverage of timepieces, I don’t normally talk about myself. Today will be a bit different, because I am talking about the very special role that the “dad watch” can play in our lives. A dad watch is quite simply the (or a) timepiece your father wore while you were growing up. Maybe you remember it, maybe you even now own it. In any event, I think we too often forget how much we may have been influenced by our dad’s wrist watch in our own tastes and lives.

While this article is likely going to publish on Father’s Day, it is being written a few months earlier in March of 2014. The reason is because in a sense this is my eulogy to my own father, who passed away somewhat unexpectedly a few days ago. He was always proud of aBlogtoWatch and became very interested in timepieces during the years of my life that I spent developing and building the site which today has grown above any beyond my own efforts. It seems fitting that today aBlogtoWatch not only honor him, but also everyone’s father who had a role in developing and encouraging the passions and interests that they have. Most importantly, I want to honor what I recall as being the first watch I ever saw him wear – a handsome and simple Seiko. It was not until I was an adult that I even found it stuffed away in a drawer and had a memory of when he wore it. The watch was from the 1980s when getting a quartz timepiece was high-tech and the way to go for a watch. I don’t know why he stopped wearing it, or when, but I do recall it on his wrist and find that years later, it still fits his personality so well. In the latter part of his life, he wore a disparate range of timepieces, mostly ones that I had gotten him, but not all. In fact, his favorite watch to wear was one that he chose exclusively to tease me.

His choice in the years before his passing was a drug store Timex with a simple analog dial and black strap. It was functional, it was demure, and it irritated me to no end. He knew he had better watches, and he knew it annoyed me. He had a spirit of peaceful protest, not because he wanted to anger me, but because he genuinely liked it, and always taught me and others to be tolerant. It was his way of saying “I respect that you are a watch snob, and I love nice watches, but I also want you to come down to earth a bit and realize that sometimes simple tastes are not wrong.”

Even though the Timex caused me to roll my eyes, I put up with it because I knew it made him happy. He would on special occasions of course wear nicer timepieces that I got for him because he did enjoy them, but he honored me the most by sharing with the people he met in his daily life that watches should be a part of conversation and more than just a gadget to tell the time. People often ask me whether or not I acquired a fondness for watches from my father or grandfather. Each were men who wore watches on a regular basis, but neither was per se an aficionado. Having said that, I did learn an important lesson about watches from both of them – that a man wears a watch because a watch represents responsibility.

Children often observe and admire adults for the “adult” things they do. Adults got to do what they want, had no bedtime, and were responsible for things like being places on time, and schedules. All of that related to watching the time, so inherently an adult needed to keep track of it. Children for the most part do not, but to act more like an adult I always wanted a watch of my own from a very early age. It was my father who outfitted me with my first watches, of which there were many. I distinctly recall wearing my first watch from the early age of three or four years old. It was my father of course who chose my first timepiece, and of course, it was a digital Japanese watch. I wore timepieces like that until I was an adult, sometimes more than one.

Ironically enough, I discovered a childhood picture of myself “double wristing it” with a timepiece on each wrist while playing around in the ocean. No doubt my fascination for watches came from my father. In fact, at the time, I recall thinking of watches exclusively as a gadget that you got to conveniently take around with you because it was strapped to your wrist. Sometimes I would choose two – because that was pretty cool at the time (or because I had a difficult time choosing – that would have been like me). Interestingly enough, I never thought to look at what watches other people were wearing aside from my father when I was a kid. His watch and what he chose to wear was all that interested me. For a lot of boys, their dad is their hero, so looking at anyone else just didn’t seem to matter.

The unpretentious nature of my dad’s Seiko was kind of incredible, and it was exactly like his own personality. Staring at the design I see something inherently classic, handsome, functional, and yet completely devoid of ostentation. It wasn’t a simple watch, as it had some interesting design features and a nice bracelet, but it was understated. It fit in anywhere, but never demanded a lot of attention. It was the type of watch meant to blend in, and that was how my father preferred to be (until he chose to speak that is). I find it interesting how neatly such a simple thing like his watch mirrored his social sentiments. Did he so carefully choose this watch, or was it a mere serendipitous connection?

Thinking about what I know in regard to most watch-buying consumer behavior, I don’t think his choice of timepiece was an accident. People frequently make subconscious decisions about the items of importance they wear on a regular basis. During the 1980s owning a timepiece was more or less required, and the idea of a luxury watch was not nearly as pronounced as it is today. Still, I think the average person put a lot of thought into which models they chose to wear. From the first time I wore a watch, I was rarely seen without one. While I went through a number of different timepieces as a kid, I was highly attached to each one that I currently owned. I recall a time in the first grade when, running late for school, I accidentally forgot my watch at home and nearly panicked as my father was about to turn into the elementary school parking lot. I pleaded with him to turn around to go back home and get it (and be late to school). He did so without too much complaint so that I could be at school “safely” with my watch. I’ve often thought about that story as a reflection of my own watch love from a young age, but now with my father in the context, I realize the real hero was him, for allowing me to attend class in a dignified way with my watch, an item that attached me to the adult world, and also himself. I don’t know that every parent would have made that decision, but I do know that my elementary school frequently complained about him displaying an odd sense of responsibility. I suppose they were just looking at things from a different perspective, given what my father weighed as being important.

Clearly, my father was not a shining example of being on time, but he was pretty good, to be honest. What he was exemplary at was taking responsibility seriously. Owning a watch is like owning time. With it on your wrist, you have the ability to responsibly use it. He never seemed to take any responsibility lightly. It has made me feel something interesting as an adult – when I see someone without a watch I tend to think of them as being either irresponsible, or choosing to be in a sense of extreme leisure, even though the time is not important when you are on vacation or at home.

Inadvertently, my father taught me an important lesson about responsibility and the tools that go with it. I grew up learning that when you had a job to get done, you should also have the right tools – and part of a necessary tool arsenal for life is a wristwatch. My dad’s watch is just one of many things about him that had a deep influence on me as a kid and resulting adult. It is entirely possible that from an aesthetic standpoint, my father and I differed in taste. Nevertheless, we agreed on what a watch represented, and that for us, responsibility was tied to owning and wearing a useful timepiece. And that being an adult was really all about responsibility.

My father has passed, but the sadness probably never will. I’ll always think fondly of him and feel a special kinship with others who have lost loved ones as well, because it involves the type of character-building pain (as my father would put it) that you simply can’t convey unless you have experienced it yourself. To be honest I don’t know what to do with his watches, his Seiko Quartz from the 1980s especially. I could put it on, but I’ll never be able to wear it. I simply can’t fill a space meant exclusively for my father.

In the end, I am just one of the many of you that have special stories about our dads and their watches. In addition to your fellow readers, I too would like to hear about some of them.