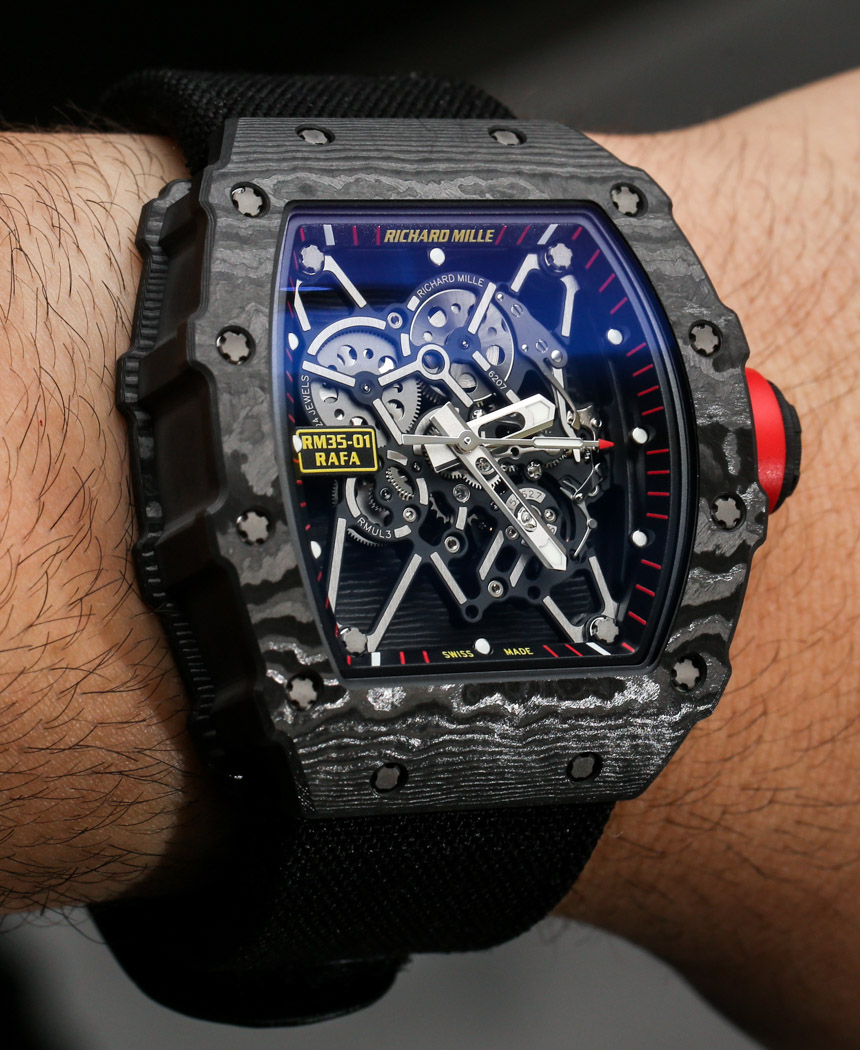 For 2014, Richard Mille has released yet another model in the new series of Rafael Nadal timepieces called the RM 35-01. Back in 2010, Richard Mille wowed not just the watch industry but the world when he placed a tourbillon-based timepiece on the Spanish tennis champion’s wrist to be worn while playing the sport. Nadal not only famously earned trophies while wearing the $500,000-plus limited edition RM027 watch, but also lost/broke a few along the way.

What made the original RM027 watch so special was its weight. I forget the precise record it set (as so many of these records come and go), but I am pretty sure it was the lightest mechanical or tourbillon-based mechanical watch ever made as, it made use of an exotic lithium-alloy based case material. The idea was that it was light enough not to hamper Nadal’s game, and durable enough to withstand it. From a marketing perspective, it was genius. Several years later, Richard Mille decided to continue the Nadal saga by releasing a follow-up model with the RM 27-01 series of watches that were available in a few colors. A bit larger and more interesting looking than the original, the RM 27-01 was actually one gram lighter, being just 19 grams. It also made use of a unique tension cable system to secure the tourbillon movement in place, making it more shock resistant. Also limited to just 50 pieces, the RM 27-01 made the original RM027 sound like a bargain, with a retail price of $690,000. That trend now changes for 2014. What struck me about Richard Mille’s newest offerings were the prices. Of course Richard Mille watches will always be at the “cutting edge of exclusive,” but some of the newest models were in the $100,000 range versus the $500,000 – $700,000 range. As such, the biggest mechanical difference between the 2014 RM 35-01 Rafael Nadal and previous series models is the lack of a tourbillon. Can the watch really be a “Nadal” without a tourbillon? In fact, Richard Mille has made it a point to imbue most of its athlete watches with tourbillon-based movements. While the brand is really at its most “Mille” with a tourbillon, I think some of the brand’s non-tourbillon movements are its finest.

While visually very satisfying, the Caliber RMUL3 movement inside of the RM 35-01 is relatively simple, offering just the time with hours, minutes, and seconds. It is manually wound and has a power reserve of about 55 hours. Most of the movement is made from titanium bridges and it operates at a frequency of 4 Hz (28,800 bph). Again, this is a more basic Richard Mille movement, but still has a lot of the visual technical style people have come to expect from the brand. Rather than focus on movement innovation, the RM 35-01 is part of a few new watches for 2014 that showcase a new material Richard Mille is using for cases. They call it NTPT carbon, and we debuted it here late in 2013. “NTPT” stands for the company which produces it; that is North Thin Ply Technology, which is actually based in Switzerland. The material is a specially layered carbon composite that is technically a high-tech laminate. Using many layers, it has been used for a series of industrial and sport purposes such as for America’s Cup boats. It happens to have the unique quality of looking like Damascus steel when produced in the right way.

Damascus steel is a layered metal that (especially) when acid treated shows of the various layers and is said to have a “wood grain” style texture. Damascus steel is used in certain watches such as those produced by Gustafsson & Sjogren (Gos), and is often prized by collectors for its visual style. Now Richard Mille has its own “Damascus” material with the interesting look of NTPT carbon, which in this case is colored black. I have a feeling that the material can be in most any color, though I haven’t been able to verify that.