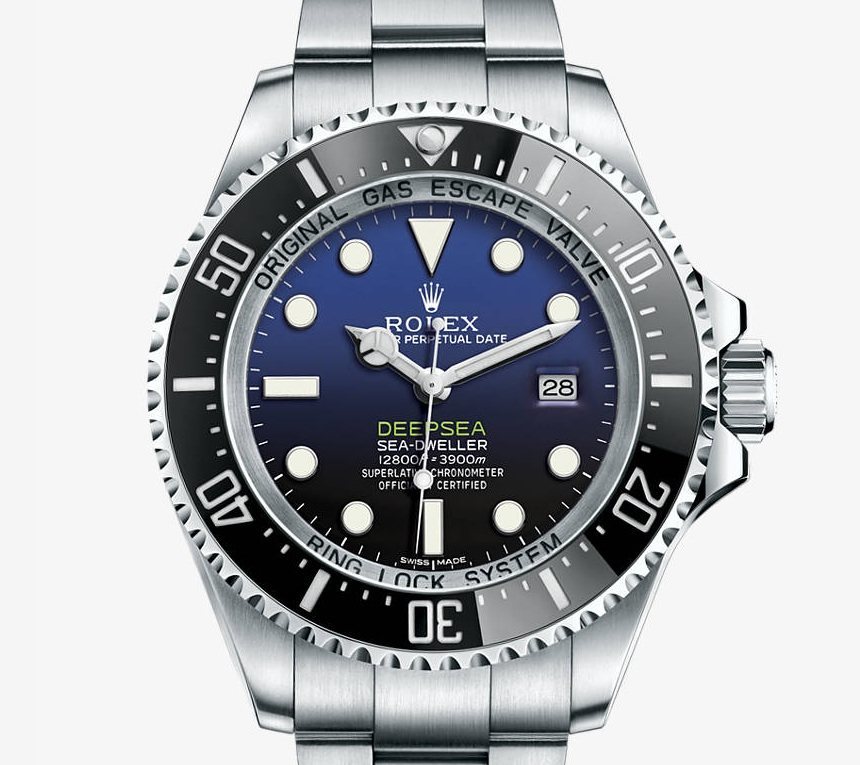 Rolex doesn’t normally release watches outside of its normal Baselworld schedule, but today they have made their very first exception to that rule by releasing the new Rolex Deepsea Sea-Dweller with D-Blue Dial 116660 watch. It has a blue and black gradient dial with a vibrant green colored “DEEPSEA” text on the dial. Interestingly enough the reference number for the D-Blue is the same as the standard black-dialed Deepsea.

Another testament to the unique nature of this occasion is how Rolex teased that the announcement would be on August 4th 2014 a few days in advance. Many considered Rolex to be quite late with the announcement as it was August 5th in much of the world by the time it was released. With that said, the Rolex Deepsea D-Blue watch is finally here, so let’s see what details we know and how it relates to Rolex’s relationship with movie maker James Cameron.

The new Deepsea D-Blue is dedicated to James Cameron’s successful descent in 2012 to the deepest point on our planet located at an immense depth of 10,900 meters below the surface of the Pacific Ocean. An upcoming film will be released a few days from now, known as Deepsea Challenge 3D. The film will explore Cameron’s descent and some of the scientific successes of the voyage. Cameron himself would have never done the dive if there was not some scientific outcome possible. On the dial of the watch the green color of the “DEEPSEA” label represents the decent of Cameron’s submersible as it is the same color. We previously discussed the History of dive watches, where Rolex has an incredibly diverse journey of creating waterproof watches. Not only did Rolex create the first seriously water resistant timepiece with the Rolex Oyster in 1926, but about 30 years later they also created the Submariner, one of the most widely recognized diver’s watches of all time.

The limits of what a watch can achieve in terms of water resistance have been pushed to their absolute extreme by the brand in 1960 when, for the first time ever, a wristwatch made it to the deepest point on Earth. Known as the Rolex Deep Sea Special, the watch dove to about 10,900 meters below the surface of the Pacific Ocean with two brave men and their 150 ton submersible called the Trieste. 42 years later in 2012, James Cameron and his Deepsea Challenger submersible (and watch) made it to the deepest spot of the Mariana Trench as a revival of the 1960s mission. Once again, there was a Rolex watch on-board. It was the massive Rolex Deepsea Challenge, a 51.4 millimeter wide and 12,000 meter water resistant watch, strapped to the robotic arm of the Deepsea Challenger withstanding the crushing pressure of 1,100 atmospheres. This new Rolex Deepsea D-Blue dial watch for 2014 is a tribute to the 2012 mission. The original Deepsea Challenge was a never-commercially-produced watch that was a super-sized version of the current generation Rolex Deepsea with its 3,900 meter water resistance rating. This was the watch James Cameron wore on his own wrist inside of the Deepsea Challenge submersible during his almost 7 hour long dive. As you can see on the chart above, the already substantially sized Deepsea with its 44 millimeter diameter and 17.7 mm thickness looks extremely small when compared to the monstrous Deepsea Challenge and its 51.4 millimeter wide and 28.5 thick case, designed to withstand a crippling 13.6 tons per square inch of pressure.

Thanks to these unheard-of specs, the Deepsea Challenge successfully accompanied Cameron on his adventure, which was recorded by several cameras for a new film that would reveal previously unknown and invaluable information about the magnificently diverse forms of life present at such immense depths, as well as the painstaking process of crafting the submersible used on the mission. On August 8th, 2014, just four days after Rolex has announced the Rolex Deepsea Sea-Dweller D-Blue, Cameron’s movie titled Deepsea Challenge 3D will premier in the United States, telling the story of his fantastic experience as the first successful solo dive to the Mariana Trench, as well as the incredible achievement of the Deepsea Challenger submersible and the wristwatch strapped to it. Rolex offered a teaser before the watch release showing the profile of a Deepsea case, bathed in blue lighting and hinted with two small drops of water. That was everything we had and nothing more. However, we felt that there had to be a reason for the blue lighting as we would not expect Rolex to use it merely for the purpose of distraction: and we were right, as the new watch is indeed the Rolex Deepsea Sea-Dweller D-Blue with a deep blue dial that gradually transforms into deep black, imitating one man’s journey to the deepest place on Earth. The blue and black theme is mixed up with the text “DEEPSEA” printed in vibrant green – added as a tribute to the color of James Cameron’s submersible, the Deepsea Challenger. This color effect is probably rather straight forward and not a color-changing effect like the 2014 Rolex Milgauss Z-Blue dial watch (hands-on here). Of course Rolex is really into blue and black right now. The 2013 Rolex GMT-Master II day/night watch with a half blue and half black ceramic bezel might be a nice complimentary piece to the Deepsea D-Blue dial timepiece.

Otherwise, the Rolex Deepsea Sea-Dweller D-Blue is the same 44mm wide steel-cased super dive watch that Rolex has been producing, but with a distinct dial color. It is water resistant to 3,900 meters (12,800 feet), has the Cerachrom black ceramic bezel insert and the “Monobloc” middle case with Helium Escape Valve. More tech specs are below. The resulting watch is a surprise-release from Rolex with the first dive watch dial with non-straight forward color that will certainly fuel some heated discussions among fans of the brand. Pricing for the Rolex Deepsea D-Blue Dial watch is $12,350 — a slight premium over the $12,050 price of the standard Rolex Deepsea watch — and it is expected to be available by the second week of August. rolex.com