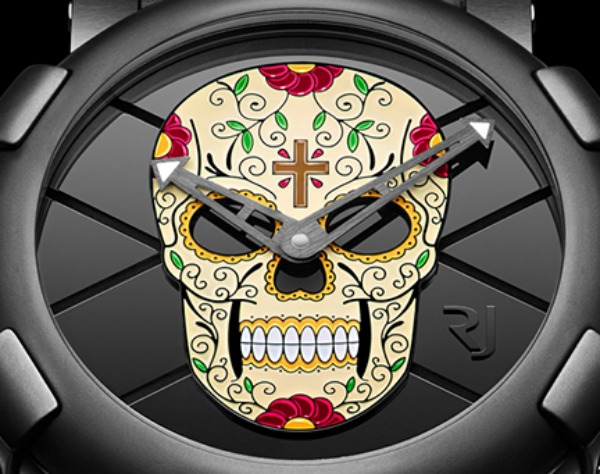 In honor of the Mexican Day of the Dead holiday known of course as Dia de los Muertos, Swiss Romain Jerome watch will produce two limited edition timepieces. There isn’t too much to say about the new watches aside from describing them as they inherently are merely new dials for the brand. Living and growing up in Southern California you learn about the Day of the Dead holiday from a young age given the high population of Mexicans. Though I more or less have a rather ignorant understanding of it as “cool painted skull Mexican sort-of-like Halloween holiday.” There is a lot more the Dia de los Muertos than that of course, as it is a holiday with roots going back thousands of years to Aztec traditions.

The RJ Day of the Dead watches will come in PVD black coated steel cases that are 46mm wide. These are the traditional Titanic DNA style cases with the X going through the dial into the bezel claws. On the dial are two possible Dia de los Muertos style painted skulls (apparently done by Swiss artists). The two versions are only slightly different with there being a cross on the forehead of one skull, and no cross on the forehead of the other version. I can understand that dual offering as some people are more or less desirous of religious symbolism on their timepieces or clothing.

From a fashion perspective the watch is sort of cool. I dig it, and I think a lot of people especially in the Southwest here will also enjoy the dial of the Romain Jerome Dia de los Muertos watches as well. Though it will be a pricey piece to justify for “every once in a while.” Also, I do see a missed opportunity by RJ in terms of the strap. A few years ago Romain Jerome started to have some special “tattoo” watch straps with cool designs printed into them. I feel like like set of RJ Dia de los Muertos watches would really benefit from having straps that have the same type of art as the skulls. Doesn’t that seem right? Perhaps as an option at least. Romain Jerome will produce just 25 pieces of each dial style for a total of 50 Dia de los Muertos watches in the limited edition collection. Price will be $15,900 each.