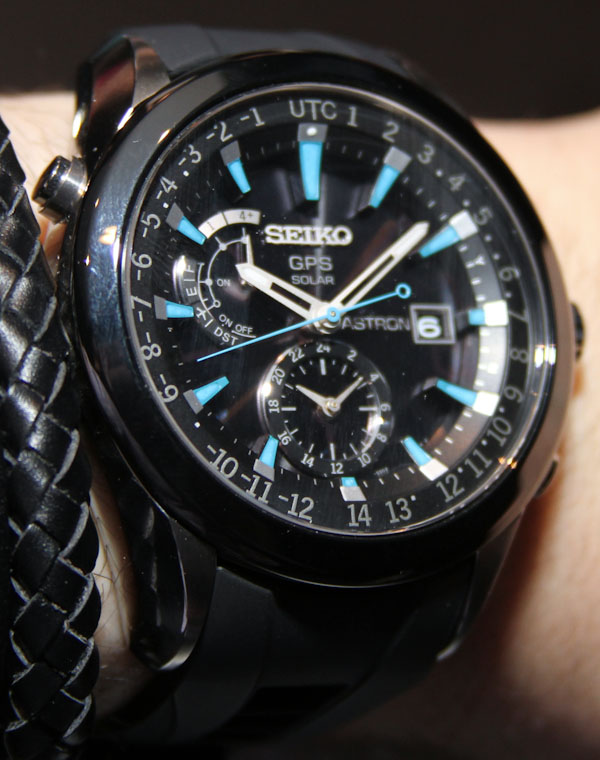 Forget that it is 2012 and pretend like it is the early 1990’s – the time when electronic wrist gadgets were super cool, and the next neat Casio was sure to excite you. The Seiko Astron GPS Solar Watch coming out back then would have been a no brainer superstar. Today however, the Astron GPS Solar must compete with mechanical watches given the over $2,000 price of this limited edition GPS controlled Seiko. Which is ironically strange given the pretty intense level of functionality you get here.

Seiko did not invent the GPS controlled watch. Actually, last year, its rival Citizen came out with the Citizen Eco-Drive Satellite Wave watch which also used GPS signals to control the time – but in a different way. These are two very different looking watches and have distinct features. Though they are both high-tech Japanese watches priced similarly, the Seiko Astron is probably a more apt everyday wear. I’d have to do a long-term review to fully find that out. Seiko also claims that the Astron is able to track multiple satellites to determine the location of the watch. This is unlike the Citizen which apparently only takes the time from GPS signals after you indicate where you are located. This is at least how I understand it and according to Seiko the Astron is a “watch with satellite controlled time and date with GPS time zone adjustment on demand.” Let’s discuss (again) why all this is a big deal to begin with. Most watches have self-contained timing systems. Meaning that the watches themselves measure the time and you are bound by the accuracy of that system. Then came atomic clock controlled watches which added the ability to sync with local atomic clocks using radio signals. Basically, the internal quartz movement of those watches has the ability to receive radio signals emitted by one of the six or so atomic clocks around the world. Each day, the movements would momentarily be in “receiving mode” to update the time. Those only work if you are within range of the atomic clock radio signals. Many of these watches (most are produced by the Japanese or Germans) would also have special solar panel dials enabling internal batteries to be charged with light.

The most recent development in wrist watch time synchronization technology is the ability for watches to intercept time and calendar (as well as location) data from global positioning satellites. This extends the range of synchronization capability to the entire globe – versus only areas where you can receive atomic clock radio signals. The only limitation of course is the need to be outside or close to a window to get signals from space. Watches like the Citizen Satellite Wave and the Seiko Astron GPS Solar watch are the first to not only receive GPS signals, but they also receive power from light. Theoretically, this should make them always accurate and always powered given simple environmental compliance (basically being outdoors once in a while). As a gadget lover, this all sounds pretty awesome. And the funny part is that as a watch lover, I have to meld my mind around the idea of wearing a non-mechanical watch. For the Astron GPS Solar I would heartily make the exception. Get this puppy on my wrist pronto, Seiko! Astron is the historic name of the world’s first quartz movement-based wrist watch, released by Seiko in 1969. The brand brought the name back for a limited edition 40th anniversary piece, and now again for this very modern watch. Does this signal the return to the Astron name? Maybe a bit.

So how does the Astron GPS caliber 7X52 quartz movement work? Like atomic signal controlled watches, the Astron GPS automatically (or manually) goes into receiving mode once a day to connect with global positioning satellite signals. It actually connects with up to four or more satellites at once. This is to ensure proper triangulation so that the watch knows where you are. This is important to determine the time zone and calendar data. There are 39 timezones on the planet, and the Astron GPS Solar will be accurate in any of them. This is all done via a special low power consumption Seiko quartz movement – which is a complex feat given that it needs to sip power to communicate with satellites. According to Seiko it takes six seconds to update the time, and 30 seconds if you need to update your location. Functionally speaking, the watch has the time, second timezone in 24 hour format, perpetual calendar, signal strength indicator, and other data related to the GPS signal connection and location data. The dial is deep with large applied hour markers and bold hands. You can’t tell that the dial is made for light to pass through it and all the indicators are quite legible despite the busy dial. I also like that the second time zone is very easy to read (being its own separate dial). While the watch is a perpetual calendar (you don’t need to adjust the date), it only displays the date on the dial and not the month or leap year.

The Seiko Astron GPS Solar is not a small watch – but it is relatively light (but not cheaply so). The case is 47mm wide in a very high quality titanium or steel. It is also 16.5mm thick. The polish is quite good and Seiko was smart to include a highly scratch resistant ceramic bezel in black on all models. Some of the pieces are in IP black as well. In total, there are four different limited edition models for 2012. Two in titanium and two in steel. As you can see, the dial colors vary from being accented with white, gold, or blue. While there is no steel bracelet option, the titanium version of the Seiko Astron GPS Solar does come with a nice, simple bracelet. There is also a rubber strap option. Overall, the Seiko Astron GPS Solar is a high-end quartz watch with a very special type of functionality that will appeal to a lot of guys out there. It isn’t cheap, but this limited edition of 2,500 pieces collection is just the start. I fully anticipate that in the near future, Seiko will release additional GPS controlled watches at lower prices. Though, these high-end models will be the nicest. If you like (or need) anytime world-wide accuracy in a watch you don’t need to worry about, then you probably consider the Astron GPS Solar Watch to be the next best thing.

Prices are between $2,300 and $3,850 depending on the case material and model.
www.seikousa.com