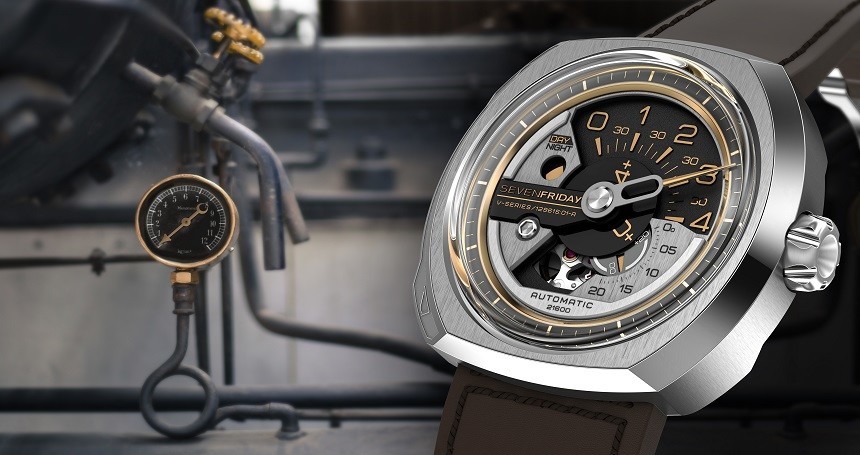 So it has finally happened: SevenFriday have released a new collection – or series, as they like to call them – with the SevenFriday V-Series. It is the newest addition to the family that previously contained the P- and M-Series. While its forerunners were all 47mm soft-edged squares, the case shape of the V-Series is totally different. Two left side protrusions, housing a simple-but-smart FSC (Fast Strap Change) system, change the look of this watch entirely. In the same way Star Wars got creative with the shaping of their lettered craft, this watch kind of looks like a V that has toppled to its right and just decided to stay there. Aside from the obvious shift in silhouette, the SevenFriday V-Series features a round specially hardened and anti-reflective treated domed mineral glass and a more traditionally shaped dial. This design trait goes almost unmentioned in the press release. Not because it is a small change (I personally believe it to be seismic for the brand, and potentially destabilising), rather because there is so much more to mention when it comes to this new offering. Aside from the FSC (patent pending), this watch also features an NFC chip, installed on the neatly engraved, screw-down case back. On the subject of case back engraving, I’ve always liked SevenFriday’s trick of distracting their customers with a bucket-load of technical information used as case back decoration. When a customer turns a watch over in their hands, they want to see something. Most often, they expect a movement, but in the absence of the watch’s beating heart, an excellently engraved image or, in this case, a clinical breakdown of the watch’s functionality will do. I like it because SevnFriday uses an unembellished Miyota, which is cool and reliable, but certainly not too flashy. The engraving on the case back is very good quality – relatively much better in comparison to other case back engravings than the Miyota is to other movements. In that sense, I believe it to be an upgrade and can not fault the brand for making that decision (and, after all, the balance is visible on the dial). The inclusion of an NFC chip, however, is somewhat more striking a development for the brand. NFC (Near Field Communication) chips can be loaded with information, which can be used for a variety of tasks. A few months ago, I wrote a lengthy piece focusing on the technology when I reviewed the Bulgari Diagono Magnesium Concept. In the case of the Bulgari, the watch could be used to open doors, store personal details of the wearer, and carry digitised travel documentation (in theory). SevenFriday’s aims for the V-Series are initially more humble, but set to grow. Right now, the brand are using the NFC chips to verify authenticity – how that exactly works in real life is something we’ll be finding out and sharing more about in our upcoming hands-on review on of the very first pieces available from the V-Series. For now, we’ll say what we know, which is that it’s basically a high-tech watermark for now – but plans seem to be to expand the functionality of the medium soon. The case is far more “finished” than the brand’s previous efforts. Gone is the rubberised shield that surrounded the P- and M-Series models, and in its place, we see high polished bevels and a straight-grained glass surround. Talking of the glass, take a look at that vintage high-wall dome – what a nice touch! You can see their designers’ attempts to reference old-world machinery with choices like that. I like it a lot. Additionally, the dial and time display of the SevenFriday V-series has a drastically different layout to the P- and M- Series. There’s a lot going on with the dial: there’s a day/night indicator (at 9 o’clock), small seconds indicator, multiple finishes and colors, four levels on each dial, and 12 applied galvanic elements to boot. It’s the main selling-point of the watch for me. SevenFriday have continued with their trend of jazzing-up the dial to a crazy level.

They’ve even added a new “complication,” reducing the number of static hour markers to 4, and installing a centrally-mounted disc that “adds” hours to the 0-4 scale shown between the traditional 11 and 3 o’clock positions. It might take you +4 or +8 hours to read the time at first, but it certainly looks the business, even if it might not be to everyone’s taste. SevenFriday’s aim was to evoke thoughts of industrial essence, revolution, and engines – they have, in my opinion, succeeded rather well.

SevenFriday feels like a mainstay in the watch world these days. It’s hard to believe the brand was founded in 2010. It’s remarkable that they have been able to carve out such a niche for themselves in such a short space of time. That said, as seen with other overnight sensations like HYT, when you come to the table with something new, you can expect to find an empty chair waiting for you. The problem this presents, especially for a small and laterally creative brand like SevenFriday, is how to innovate on the original idea in order to remain relevant, all the while working within a budget that wouldn’t even cover the bill of Rolex’s Michelin-star rooftop restaurant for one day. With the release of the SevenFriday V-Series, this ingenious brand has taken the first steps away from their tried and tested case shape. This move worries me, simply because it is so very much not what they are known for: I always liked being able to spot a SevenFriday from across the room. I’ve argued that in terms of price versus identifiability, there are few that can match the SevenFriday P- or M-series. The V-Series must earn its stripes as its big brothers had to. To its credit, though, it has an awful lot more going on than either of its preceding series. There will be two new models offered in the SevenFriday V-Series. The SevenFriday V1/01 and the SevenFriday V2/01. They are technically identical, just different colorways. The V1/01 is a white/blue dialled variant, while the V2/01 is a black and “old” yellow set-up. They are both pretty handsome dials: The V1/01 is very sleek and professional, and the V2/01 has a retro cool flavor reminiscent of the early M-Series models. Both have a 40-hour power reserve and use the Miyota 82S7 calibre. Both versions will have a price tag of CHF1,055. sevenfriday.com