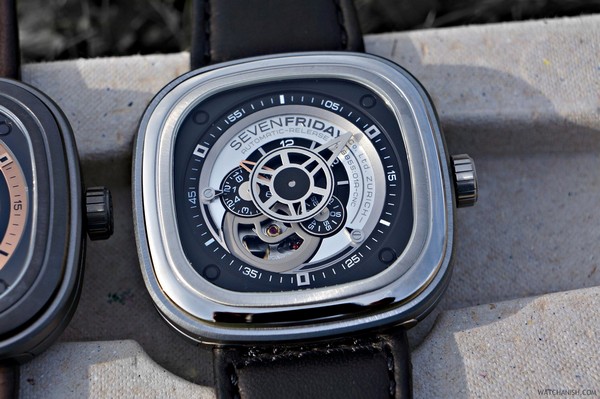 A couple of months ago I received a press release via email. Whilst most communications like this are filed away not to be seen again by me, I really took notice of one in particular from SevenFriday. The release text wasn’t particularly exciting, but the images showed a range of watches that looked very appealing. I read on and saw the specs, then I emailed to inquire about the retail price. My real interest in the brand came when I read the reply to my email. Having worked in the watch industry for over a decade, I was fully expectant of receiving an answer somewhere around the $1,600 – $2,500 mark. Had it not been for the stated Japanese Miyota automatic movement (and instead an equivalent Swiss iteration) those estimates would have doubled. Instead what came back to me was a well worded email telling me very calmly that the watches have a retail price of approximately $890 – $950, and ship worldwide from Zurich. Knock me down with a feather! I then waited a good two months before a SevenFriday stamped package arrived at my door from Zurich. Opening that box made the wait worth it.

The watches came in two very large ‘crates’, similar in size to a fine wine box. Inside were your usual assortment of warranty cards (printed on thin sheets of metal), instructions and polishing cloths. Of course, the main attention was on the watches. Measuring 47mm across, it’s not small, yet wears much closer to a 44mm Panerai due to its thinner case and regular sized crown. For me it was fine, though I wouldn’t really wear anything bigger nowadays. The retro “TV” shaped case reminds me of the TAG Silverstone which is no bad thing, and the finishing on the case is as well executed as you’ll find on a watch sub $5k. The watch case is available in two different finishes for the time being. Both are constructed from 316L grade stainless steel, with one of them being grey PVD coated to give a dark titanium appearance. This version of the watch (the P2) also has a contrasting copper “Animation ring” which is used as the minute track inside the dial. A nice contrast I think, and it enhances the look of the watch very well. The main draw for me is the dial, and in person it is fantastically well constructed! The hands are large and legible to show the time, whilst there are two rotating discs showing the running seconds and 24 hour time. There is also a small skeletonized section on the dial which shows the balance wheel of the movement. This is something that I usually don’t like on a watch, mainly because it’s normally executed in a gaudy “oh look it’s pretending to be a tourbillon” kind of way. Here however it doesn’t look out of place and matches the aesthetics of the dial and watch quite well. A pearlage finish has been put to the inner steel ring which adds a nice luxurious touch to the overall look, and there is a single layer of anti-reflective coating on the underside of the crystal which helps legibility. The straps are made from calf leather and are 26mm at the lugs tapering down to 24mm by the buckle. They are nice enough, though quite stiff when new and need a bit of wear to soften and break in.

Reading the watch is pretty straight forward, though the unconventional hands mean that it’s probably a good idea for me to add a diagram depicting exactly what does what:

On the wrist the watch has a good presence without being overbearing. As it’s a non-chronograph, there are no large protruding buttons to add size to the case, and the thickness means it’s very wearable and comfortable despite my 6.5″ slim wrists. The watches are available now via the SevenFriday website and various stockists/retailers. I believe they have yet to have a physical retailer in the US, so for the time being they offer to ship via an insured three day courier service stateside.

In Watch Anish style, I’d like to end with a typically overdressed wrist shot for you guys 🙂