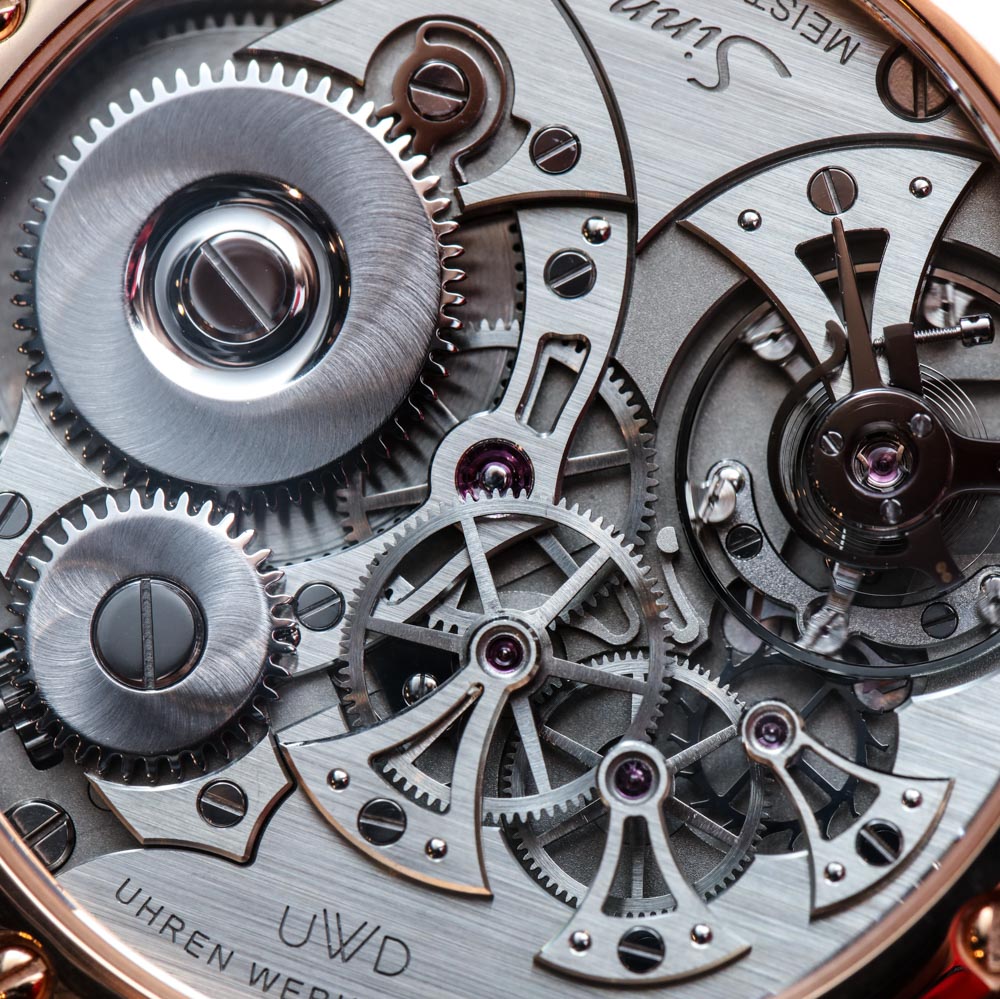 As a limited edition of just 55 pieces, this Sinn 6200 Meisterbund I limited edition watch (debuted here) is going to be rather rare – but at the same time, it should also be a sign of things to come, as this is the first watch released by Sinn with an exclusive new UWD movement. Sinn is based in Frankfurt and worked closely with UWD (Uhren-Werke-Dresden) in Dresden to develop the caliber UWD 33.1 mechanical movement that you see inside of the Sinn 6200 Meisterbund I watch. It is a real beauty and feels like a decent value for the money. Who is behind UWD? None other than Marco Lang of Lang & Heyne watches, that produces very fine and traditional German watches.

According to Marco Lang, he and his partners were keen to open up a real German watch manufacture whose goal was to do special watch projects for other brands. Until UWD opened up, as far as I know, there were no major players in Germany who were in the business of producing movements for others. Apparently, Sinn is their first major client and helped them to get to the point where they are now. Sinn also apparently worked closely with them on the design of the UWD 33.1 movement which has an incredible-looking design, even if it is a basic manually wound time-only movement. What really strikes me about the UWD 33.1 movement is both the architecture of the movement as well as the finishing. There is a combination of hand- and machine-finishing, it seems, and the particular style and quality is quite captivating, I must admit. The movement plates are produced from nickel silver (and not brass), and the balance wheel is designed with weights (similar to screws) which allow for precise tweaking by a watchmaker.

Apparently the architecture of the mainspring is unique and UWD calls it a “flying spring barrel.” It has 55 hours of power reserve while the movement operates at 3Hz (21,600bph). There is a hacking seconds feature and the movement indicates just the time with a subsidiary seconds dial. It is really a great-looking movement and certainly a highlight of the watch.

The Sinn 6200 Meisterbund I watch itself (there will clearly be a Meisterbund II) comes in an 18k rose gold case that is 40mm wide and 9.3mm thick. The case is produced in Glashütte by the noted German watch case maker SUG (Sachsische Uhrentechnologie GmbH Glashütte). You can see the SUG branding on the case between the lower logs. “Meisterbund” refers to a partnership between a few “master” entities, and it is thus fitting that the Sinn 6200 Meisterbund I watch has Sinn, SUG, and UWD branding on various parts of it. The entire point for Sinn was to produce a high-end collector’s watch that celebrates some of the best of German watchmaking (that isn’t necessarily priced at A. Lange & Söhne levels).

The dial design itself is not really new, but rather is taken from Sinn 6110 family watches. The dial itself has some light machine guilloche-engraved-style decoration and some applied hour markers. Style is conservative and traditional, even though I am not sure Sinn emulated a specific classic timepiece for the design. I would like to see the UWD 33.1 (or other new movements like it) in sportier Sinn watches in addition to this dressier fare that is nice, but not what many collectors associate with Sinn (a mostly “tool watch” brand). Moreover, the 6110 is a fraction of the price of the Sinn 6200 Meisterbund I and contains a base Swiss UNITAS movement, and not something fancy like the UWD 33.1. Nothing per se wrong with that, and the Sinn 6200 Meisterbund I does have a finer case that is in gold, but I think that I would have liked more visual distinction in the watch since it does highlight a very special movement. Recall that compared to more “collaborative” Swiss watches that use parts and elements from different suppliers, this German Sinn is much more “open” about the relationships it has with “partner” companies. The Swiss watch industry is typically marked by extreme, almost pointless secrecy in many instances in their pursuit of trying to evoke the notion that “we did it all by ourselves.” Usually that is simply a marketing fairytale, and the reality of most high-end watches is that they are born of an effective relationship between a series of specialist partners who each come together to offer what they do best. Why this fact is often ignored is beyond me at times (though, admittedly, I’ve never been in the role of a Swiss watch brand CEO). With that said, it feels good that at least in some circles such as Sinn/SUG/UWD the importance of the collaboration and each company bringing its best to the table is part of the value proposition, not a situation they are trying to put a veil over. It is difficult to imagine what is next for Sinn when it comes to producing these more exclusive German-made movements either alone or with companies like UWD. Their modified Swiss movements have served very well in a large range of their tool watches, and producing more interesting in-house movements will increase collector appeal, but also price. Sinn would further be following in a trend of other German watchmakers (like Tutima, for example) who are trying to shift from using sourced to in-house movements. In Tutima’s case, they have moved to in-house movements almost entirely, even though they continue to use some sourced movements.

Sinn would be unwise to lose their base of fans who love their rock-solid tool watches such as their many divers and pilot models that, as well as being well-made, are not insultingly priced. What I think will happen is simply more brand expansion as their range of products increases, and items like the Meisterbund watches will be an ongoing but very small part of what Sinn releases each year. The good news is that Sinn is held in a very high regard by watch lovers around the world. The problem, however, that can come with this success is quickly being able to lose sight of what made them popular with their core fan base in the first place. For now, Sinn is in a great position, and I feel that someone could own both one of their military-style watches and something the like Sinn 6200 Meisterbund I and be perfectly happy with each. While the Sinn 6200 Meisterbund I watch is more than certainly premium-priced for a Sinn product, taking together the movement and the gold case, it isn’t terribly priced at all. I encourage people to check out the lovely movement and take notice of what the Meisterbund II is all about, as I have a feeling the 55 pieces in this limited edition could be gone very soon. Sold by Sinn Watches official North American distributor WatchBuys.com, price is US$13,740. sinn.de